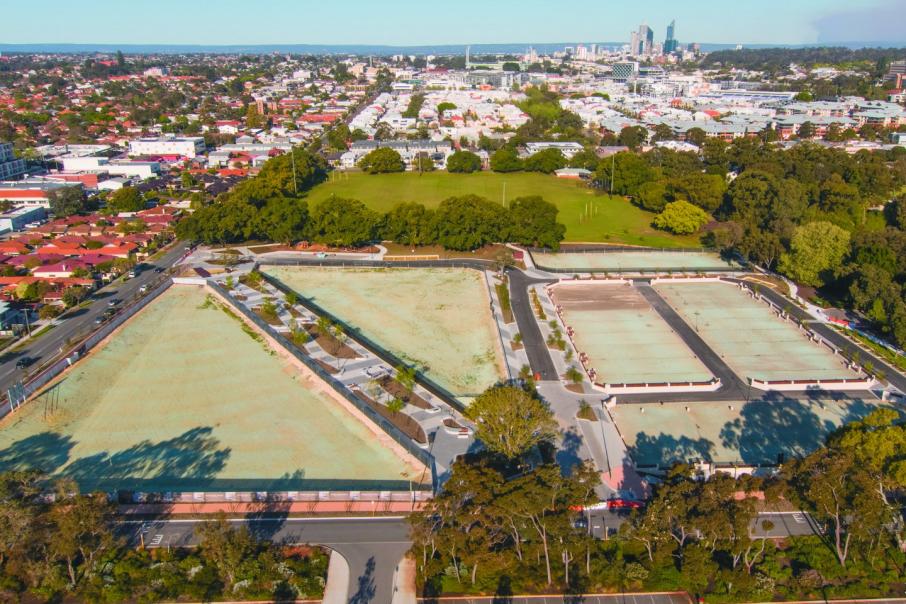 Subdivision and sales are already under way at the Parkside Walk infill project at Jolimont, located on a 3.6ha site which had sat vacant for more than 20 years. Photo: LandCorp

More than 4,000 dwellings have been created across LandCorp’s infill development sites during the past five years, providing development opportunities on previously underutilised sites.

He said LandCorp’s approach to revitalising established neighbourhoods close to existing or improved amenity and providing a wide range of housing choice – medium-density, townhouses, semi-detached and low-rise apartments – had underpinned the success of many projects.

“Western Australia is on the cusp of a new wave of thinking in the way we develop communities,” Mr Marra told Business News.

“Density is no longer a dirty word as evidenced by the popularity of our infill products across Perth.

“Diverse infill housing can also improve affordability for a range of households, including young adults who may be entering the rental market or looking to buy.

“More housing located in inner and middle-ring suburbs will ensure our cities remain liveable into the future, and are able to support demographical changes, including an ageing population.”

Across 2016-17, 88 per cent of the 777 dwelling unit equivalents LandCorp created were within its urban infill projects.

Among the city’s most active developers, West Perth-based Blackburne says it has sold more than 80 per cent of the 143 Essence apartment development at LandCorp’s Claremont on the Park project, with construction starting last month.

In addition, all 72 lots at LandCorp’s Blackmore Park Estate in Girrawheen are under contract less than three years since the first release, and all lots are either sold or under offer across its first two stages at Shoreline North Coogee, which launched in 2015.

Other recent infill developments include St John’s Wood in Mount Claremont and The Rise in Craigie, with all lots across both estates under contract within 12 months, and all lots at Regent Park in Wanneroo transacted in just over a year.

Within the past year, LandCorp has also released lots at its 3.6-hectare Parkside Walk estate in Jolimont, land vacant since 1994 after the City of Perth nursery closed, and started work at its Montario Quarter precinct in Shenton Park, on the former rehabilitation hospital site.

Despite this activity, Mr Marra said current urban infill rates were still below the long-term target set by planning authorities.

In 2010, the Department of Planning and the state Planning Commission released the ‘Directions 2031 and Beyond’ report proposing an infill target of 47 per cent of new housing; the same figure was reiterated in the ‘2015 Perth and Peel@3.5million’ draft document.

“Unfortunately, due to a variety of obstacles, current urban infill rates are around the 28-30 per cent mark in Perth,” Mr Marra said.

An Urban Development Institute of Australia WA analysis of ABS data provides a higher figure, but still misses the 47 per cent taget; of the 16,500 homes built in Perth across 2016-17 40 per cent of those new homes were within 'inner' metropolitan areas.

Mr Marra said Metronet would be key to facilitating future infill development across Perth, a catalyst for developing and revitalising activity centres, facilitating housing diversity and a move towards a more transit-oriented approach.

Innovative design also had a role to play in the next stages of Perth’s evolution across both infill and greenfield sites, according to UDIA WA chief executive Allison Hailes.

“Rather than relying on a centralised system for power and water, new land developments will be able to use microgrids and distributed networks to service communities, enabling them to become self-sufficient and less reliant on large, traditional infrastructure.”

“There is a need for both infill and greenfield development as there is demand for both,” she said.

“We are certainly seeing a growth in buyers that are looking for more compact living options in both new and existing areas, but we shouldn’t forget that a significant proportion of Perth buyers are looking for a backyard and their own space.

“The success of Perth into the future will be dependent on us delivering homes in infill and greenfield areas in the most efficient, affordable and sustainable way.”

Last week it was reported that Perth was becoming a disconnected sprawled city, however Ms Hailes said this was misleading and had misrepresented recent ABS data about where new homes were being built.

The article claimed that 20,000 new homes were built in Perth across 2016-17 and that the city’s renowned urban sprawl was continuing.

“The source data from the ABS, specifies that there were in fact 20,346 new dwellings built across the entire state of Western Australia, not just Perth, in that period,” Ms Hailes said.

“The article lists Stirling and Cockburn, which were the third and fourth most popular areas for new builds, as outer areas.

“This is hardly the case when Stirling is only 10 kilometres from the CBD and both areas have fantastic transport connections and amenity.”

Ms Hailes said 55 per cent of jobs within the Perth Metropolitan region were located in outer areas, as shown by the latest figures from the Department of Jobs and Small Business.

“It is actually the case that the location of many of the new homes being built closely matches where jobs are located,” she said.

“Further, the negative inference that is given to Perth being made up of 150km of so called urban sprawl is a popular line that gets thrown out whenever the development of Perth is discussed.

“Such comments fail to recognise that there are very good reasons for Perth being developed as a linear city and that our urban footprint is in fact smaller than many others.”