Former prime minister Malcolm Fraser has died at the age of 84. 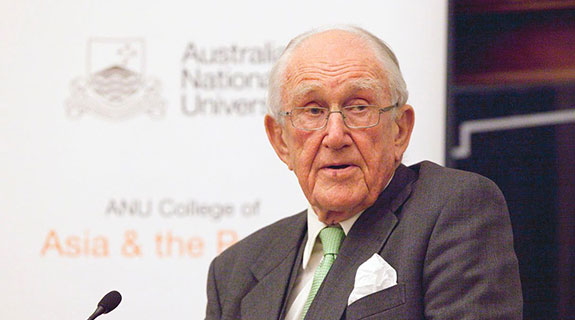 Former Prime Minister Malcolm Fraser has died at the age of 84.

Former prime minister Malcolm Fraser has died at the age of 84.

“It is with deep sadness that we inform you that after a brief illness John Malcolm Fraser has died peacefully in the early hours of this morning,” Mr Fraser’s office said in a statement.

“We appreciate that this will be a shock to all who knew him and loved him, but ask that the family be left in peace at this difficult time.”

Governor-general Sir Peter Cosgrove said Mr Fraser would long be remembered for his tireless service to Australia, and that he made an indelible contribution to the country during his many years in public life.

"It really is the end of a political era," Ms Bishop said.

Mr Fraser served as the leader of the Liberal Party and Australia’s 22nd prime minister from 1975 to 1983.

His rise to power came after the dismissal of the Whitlam government by governor-general Sir John Kerr in November 1975, following months of budget deadlock in the Senate.

Mr Fraser was controversially appointed prime minister after the dismissal and achieved a record victory in the subsequent election.

He was re-elected in 1977 and 1980, before being defeated by Labor's Bob Hawke in the 1983 election, after which he retired from parliament.

Mr Fraser is survived by his wife, Tammie, and four children.