Since the start of the year, more than $8.2 trillion has been wiped off the value of global equities. 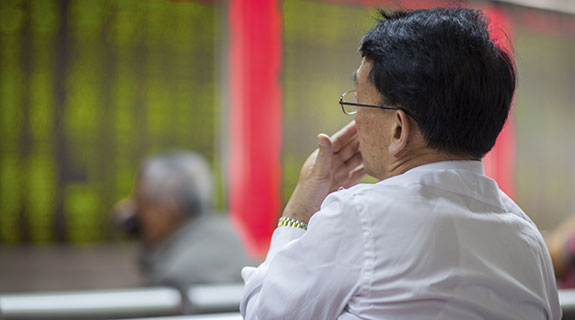 BLAMED: China has taken a large part of the blame for the volatility that has hit markets so far this year. Photo: iStockphoto/ Fang Xia Nuo

Since the start of the year, more than $8.2 trillion has been wiped off the value of global equities.

Market volatility drove the MSCI World Index of leading shares down 8 per cent in January, similar to the degree of decline seen during systemic crises, such as the 2008 Lehman Brothers collapse or the 2001 dot.com bust.

Unfortunately, China has taken a large part of the blame for the volatility that has hit markets so far this year.

Chinese stock markets have posted their worst monthly performance since the height of the 2008 GFC.

While gaining somewhat during the past week, both the CSI300 and Shanghai Composite indexes are nursing hefty losses of more than 20 per cent incurred during January.

Investor selling over the past month has been linked to a weakening in the Chinese currency, and a change in sentiment regarding poor industrial results.

In response, the People’s Bank of China has pumped out 690 billion yuan in an attempt to avoid a liquidity crunch.

In a stunning move last month, the Bank of Japan has implemented a negative interest rate policy in an attempt to prevent currency hedge funds from aggressively shorting the Japanese yen, along with the Chinese yuan.

So instead of receiving money on deposits, depositors must pay regularly to keep their money with the bank.

Theoretically this should give banks more incentive to lend money more freely and businesses and individuals to invest, lend, and spend money rather than pay a fee to keep it safe.

Premium China Funds chief investment strategist, Simon Wu, says the current panic selling shows the degree of fear over a hard landing in China, as well as doubts that the country has to depreciate the renminbi to boost growth.

However Mr Wu believes the extreme pessimism over China is overdone.

While he acknowledges that China’s economy has weakened substantially, with fatigue in the old economy sectors, Mr Wu also sees signs of stabilisation.

New economic indicators such as movie box office, the number of airline passengers, auto sales and 4G mobile subscriptions all pointed to an expanding ‘new economy’ in China last year.

Also, the contribution of real tertiary output to China’s economic growth has increased to close to 60 per cent in the first nine months of 2015.

As the government pushes ahead with the necessary reforms, the old economy sectors will continue to drag on China's growth, which Mr Wu says maybe the price to pay for a more sustainable economy in the long term.

Mr Wu believes the recent adjustment of the renminbi is more about the dollar strength than the weakness of the Chinese currency.

The renminbi has weakened against $US, but the trade-weighted index remains largely stable.

Mr Wu says China needs relative currency stability to avoid financial panic and maintain confidence in its policy, and it is not in its interest to substantially devalue the trade-weighted exchange rate, although the renminbi may become increasingly decoupled against the $US.

Mr Wu says that allowing the renminbi to fall against the dollar helps pave the way for further monetary easing by the central bank.

This is unconnected to a big competitive devaluation to boost exports, as China’s export growth has actually been holding up better than some Asian countries, which have devalued their currencies.

Mr Wu expects Chinese monetary policy to stay accommodative in 2016 and the central government is anticipated to step up fiscal effort to stabilise the economy.

The focus on China maybe misdirected, however.

According to Kerr Neilson, founder and chief investment officer of Platinum Asset Management, the prime culprit is that developed markets that are overvalued.

In a recent note to clients, Mr Neilson said while the media was likely to cast China as the current instability in markets, China had come to the rescue of the global economy by providing credit in the three years after the GFC, and in doing so, provided respite for the rest of the world.

With prices having already declined 40 per cent across emerging markets (including China) since 2011, current poor investor sentiment has already been well expressed in their share prices.

However, Mr Neilson highlights that China has exposed stock valuations in developed markets.

“China’s underutilised factories will try to find markets abroad with deflationary effects on prices, and this will wash across broad categories of products (companies) via weaker profits and in pure commodities, weak demand and prices,” Mr Neilson said.

That’s a threat to Western stock markets, he added.

Investors may finally be heeding the warning, as the key 200 and 320-day moving averages charts for the US S&P500 have just been breached to the downside.

Amazon and Netflix have lost more than a quarter of their value over the past five weeks, while LinkedIn plunged 44 per cent on February 5.

But that doesn’t mean that stock picking is dead.

Quite the contrary, Mr Neilson said.

“(Platinum has been ever more cautious as to the type of companies we wish to hold and the valuations we are prepared to accept,” he said.

That has raised the firm’s cash holdings in its funds.

And Mr Neilson has been leery of US market valuations with platinum, by shorting it as additional protection.

In other words, he’s been making money as US stocks fall.

So while renewed volatility can be a case of wait-and-see for retirees, investing with pro-active fund managers can create marvellous opportunities for younger investors with a long-term horizon.