While cost savings are one reason for greater automation in workplaces, ever-improving robotic capabilities are hastening the uptake in a range of industries. 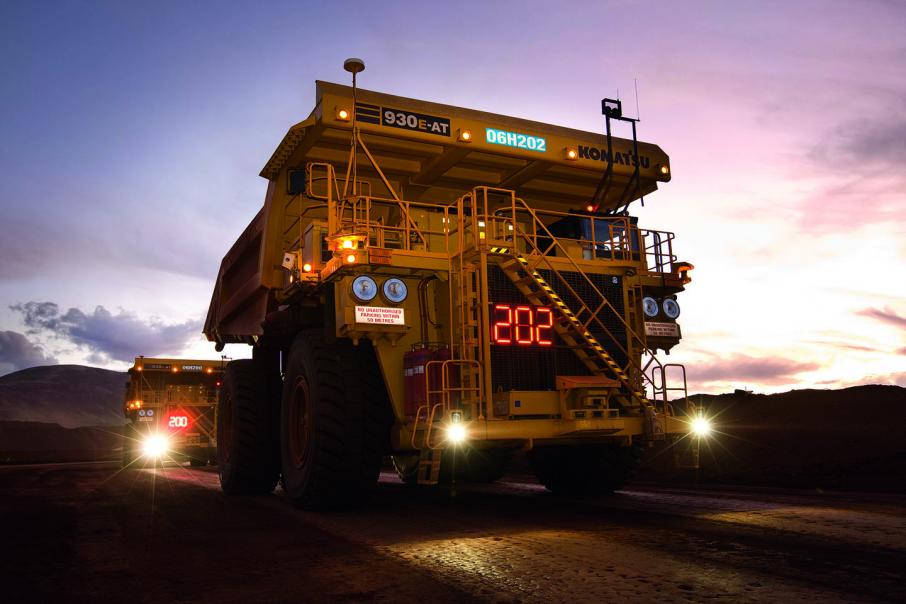 If Rio Tinto Iron Ore chief executive Chris Salisbury is right, then Western Australia is home to the world’s biggest robot in the form of his company’s mine, rail and port operations.

Be that as it may, an important question arises from Rio’s adoption of automated and remote processes for its mining operations – is it a good thing?

In terms of profitability, the shift from people power to robot control is unquestionably a winner, which is good news for shareholders in Rio Tinto, most who do not live in Australia, and certainly not WA.

In terms of creating job opportunities for the next generation of workers, the benefits from the rise of robots is less clear and might even be a factor in the stagnation that seems to have taken hold in WA’s usually vibrant economy, with population growth slowing to a trickle.

Rio Tinto is certainly not alone in switching from humans to robots for many of its functions, with the benefits of lower costs and higher rates of production matched to a safer work environment, partly because well-programmed machines are always alert, but also because there are fewer people in harm’s way.

Just how far the mine, factory (or farm) of the future might become the domain of robots is a question that has both a technology aspect to it and a human resources aspect, because while robots can do many jobs previously reserved for people, the jury is out as to whether they can do everything.

If asked, most people would say that robots will never fully replace humans, but a more thoughtful response is to try and judge just how far robots and automated processes might go and how few people are actually needed in any workplace.

Could a robot, for example, pick strawberries? Surely a mechanical device could never be as careful as a human hand, or a sensor never as capable as a human eye in separating the ripe fruit from the unripe.

Think again. According to a recent study by US-based management consulting firm McKinsey & Company, a robot developed in Japan can cut strawberry picking time by 40 per cent, while a stereoscopic imaging system identifies the location of fruit and evaluates it for ripeness.

There are other remarkable examples emerging from the world of robotics as tools are married to the science of artificial intelligence, but the starting point with the McKinsey study is cost, because it is falling costs such as those being enjoyed by Rio Tinto and BHP Billiton, with its new heavily automated South Flank mine in the Pilbara, which explain why there is a rush to robotics. 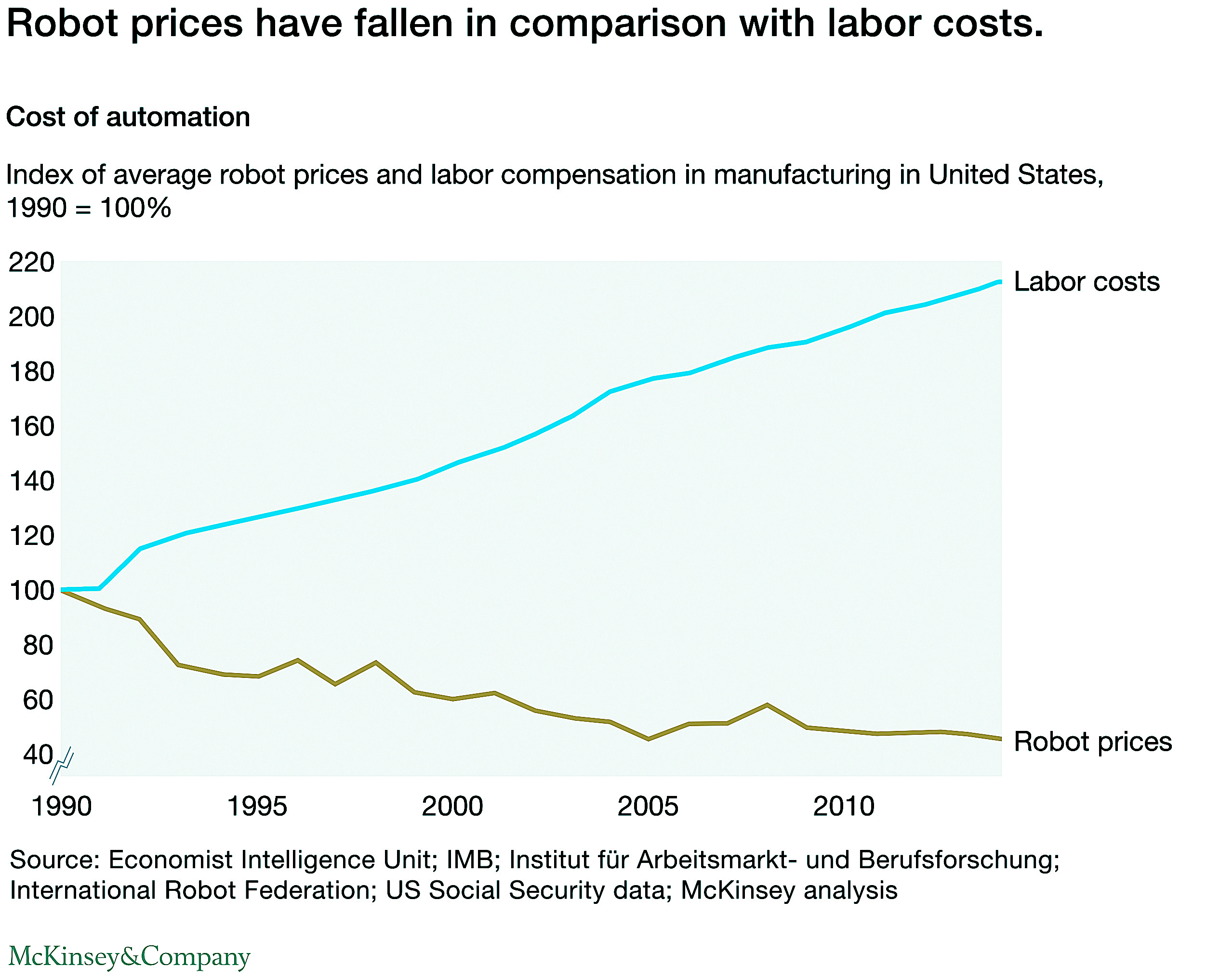 A graph in the McKinsey report titled ‘Automation, robotics and the factory of the future’ (see above) shows, that since 1990, labour costs in the US have risen by around 210 per cent, whereas the cost of robots has fallen by close to 50 per cent.

However, cost savings aren’t alone in causing the rise of robots. As human skills in designing robots expands, the scope of robotics reaches further into the production process.

Simple and delicate jobs once reserved for humans, such as threading a needle or cutting diamonds, can now be performed more quickly and with greater accuracy by robots.

Welding, an important industrial process, is increasingly being performed by robots with an associated spectral analysis function, which automatically checks the weld and eliminates a stage of the operation.

Next up could come robotic involvement in the fast-growing business of parcel delivery, with McKinsey suggesting significant benefits would flow from speeding deliveries by having an onboard robot in a van that pre-sorts parcels between drops.

In a factory setting the shift to robotic processes has been dubbed ‘lights out’ manufacturing, because a robot doesn’t need the lights on to do its job – it can work all day and all night.

Originally designed to free workers from dirty, dangerous and dull jobs, the robots of the future will, according to McKinsey: “Capture entirely new sources of value in manufacturing”.

The challenge for management will be in working out how best to harness the growing power of robots.

The challenge for people will be working out how they fit into a workplace where far fewer of them are required because the theory of robots replacing people is no longer a theory, it’s happening – rapidly.

The rate of inbound tourist numbers nationally eased to a 5 per cent growth rate in March and April, down modestly on the average annual growth rate of 6 per cent.

On the other side of the coin, more Australians headed overseas in the latest two-month period, with a long-term annual growth rate of 4 per cent stretching out to a 5 per cent growth rate.

Currency value will have had a significant effect on the movement of tourists, with the relatively high Australian dollar earlier this year it briefly touching US80 cents, luring Australians overseas – a trend likely to be reversed with the recent slide to less than US74 cents.

Interesting as the overall trend in tourist movements might be, a more interesting factor is the change in the mix of countries from which inbound tourists come – a pattern that might help tourism operators better plan their offerings.

The latest data shows that traditional leaders such as New Zealand, China, the US and UK still supply the most travellers, but they are no longer the fastest growing places of origin; that title belongs to India, followed by Taiwan and Japan.

In April, most leading inbound countries recorded a decline in numbers, except India (up 22 per cent) and China (up 7 per cent). New Zealand visitor numbers declined by 3 per cent, the US fell by 12 per cent, and the UK was down by 8 per cent.

The four fastest growing providers of inbound tourists to Australia today are India (up 22 per cent), Taiwan (up 18 per cent), Japan (up 14 per cent), and China (up 7 per cent).

Outbound numbers also show a shift in tourist patterns, with Singapore the fastest growing destination for Australians (up 17 per cent) and Indonesia, which includes Bali, dropping out of the top five to be replaced by Hong Kong (up 8 per cent), whereas the Indonesia growth rate fell to 5 per cent.

If the latest data has a message for providers of attractions for inbound tourists, it’s the sharp increase in the number of Indians heading for Australia. And while the absolute number (31,200 in April) remains dwarfed by China (109,000) it’s the trend that is interesting.