Making an impact on depression 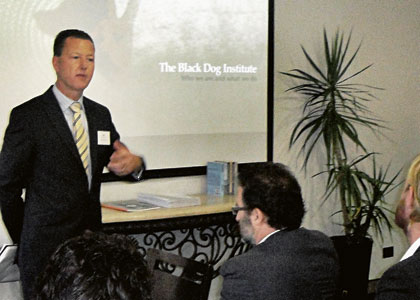 ALTHOUGH he may not have been the first to use the metaphor, former British prime minister Winston Churchill most famously used the term ‘black dog’ to describe his periodic bouts of depression.

Yet while many of Churchill’s writings refer to his illness, and his heavy drinking and manic behaviours are well documented elsewhere, the issue of mental health was not commonly spoken about in public at the time.

To some extent, not much has changed in the 60-plus years since WWII; awareness and treatment have improved dramatically but there’s still a lot of stigma associated with acknowledging and discussing mental illness.

Twenty per cent of all Australians will experience mental health issues in any 12-month period.

The Black Dog Institute is among the organisations working to generate an inclusive discussion and create research-based services to take the stigma away from depression and other mood disorders.

The institute has been around since 2002 and was built on the back of what was known for 17 years as the Mood Disorder Clinic at the Prince of Wales Hospital in Sydney.

While 90 per cent of Black Dog’s operations are in New South Wales, general manager Will Bonney and Black Dog speaker Matthew Johnstone were in Perth last week to scope out opportunities to develop a presence in Western Australia and widen the organisation’s impact.

“We are here to investigate, talk to potential partners and find out ways that we can effectively help bring around some positive impact,” he said.

“At the end of the day if it is decided that there is nothing for us to do, that is fine, but we are putting it out there to see if there are any players that would like to work alongside us or with us.”

Black Dog has three main functions: it was founded for research purposes; it works to disseminate its research findings by partnering with education organisations; and it delivers social services founded on its research.

Mr Bonney said the focus for Perth would be delivering services out of the research findings.

“We will probably start at the clinical level; we might have a physical clinic or a virtual clinic, or our professional education programs, training psychologists, psychiatrists and GPs, or our community programs,” Mr Bonney told WA Business News.

“We don’t have a fixed idea, but we know that many of our programs would benefit Perth and WA and it is a matter of working out how we can do that.

“We are not precious about our brand. If we can be a content provider to local service providers we would be really happy to do that.”

Mr Johnstone spoke at a breakfast event in Perth last week that aimed to introduce the institute to the Perth market, and told his personal story of suffering from depression over many years, experiences that eventually led him to express his state of mind through writing a book called I Have a Black Dog.

After the book was published, Mr Johnstone contacted the institute in 2004, having heard of the work it was doing.  The institute now uses I Have a Black Dog as an educational tool.

“Ever since then I saw the opportunity for what I could bring to the table and could offer. It was a meeting of minds if you like,” Mr Johnstone said.

“I think depression is a difficult thing to talk about, and if you can soften it with imagery, you are half-way there.”

Mr Johnstone speaks with professional groups, corporations and sports associations to try and generate a healthy dialogue around depression and mental health issues, and his very personal and touching story often resonates with his audience.

“Quite often really fruitful and interesting conversations can come as a result of it. The thing I like about it is that it lets people off the hook. It gives people an opportunity to look at themselves and their situation,” he said.