There has been a significant re-ranking of law firms in Perth over the past year, while the sector is also adapting to the impact of COVID-19 restrictions. 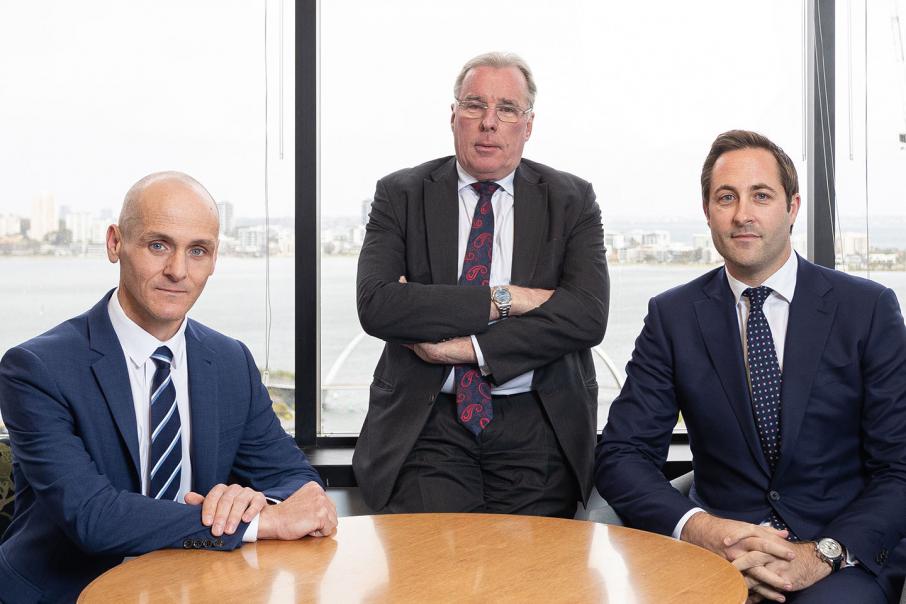 There has been a significant re-ranking of law firms in Perth over the past year, while the sector is also adapting to the impact of COVID-19 restrictions.

They were among several firms to defy flat business conditions and achieve substantial growth over the past 12 months.

With 24 partners and 93 legal professionals in Perth, HWL Ebsworth has become the second largest law firm in the state, up from 11th last year, according to the BNiQ database.

The biggest contributor to this growth was its acquisition last August of boutique corporate law firm Bellanhouse Lawyers.

Mr Artus, who is also national chairman, has led the firm during a period when it has become the largest legal partnership in Australia.

“The growth hasn’t happened by accident; we’ve been quite strategic and we’re not done yet.”

HWL Ebsworth positions itself as a legal market disrupter, though pinning down its point of difference is not easy.

“We work closely together in our practice groups nationally. We have a lot of like-minded people [and] we are disciplined in our management.

“We run our business financially like a lot of our clients do; we invest astutely and everybody is pulling their weight.”

Mr Artus said the firm would continue looking for lateral hires that suited its culture.

It was also stepping up its graduate program. HWL has taken on 11 graduates in Perth this year, up from seven last year, and Mr Artus expects about 15 next year. 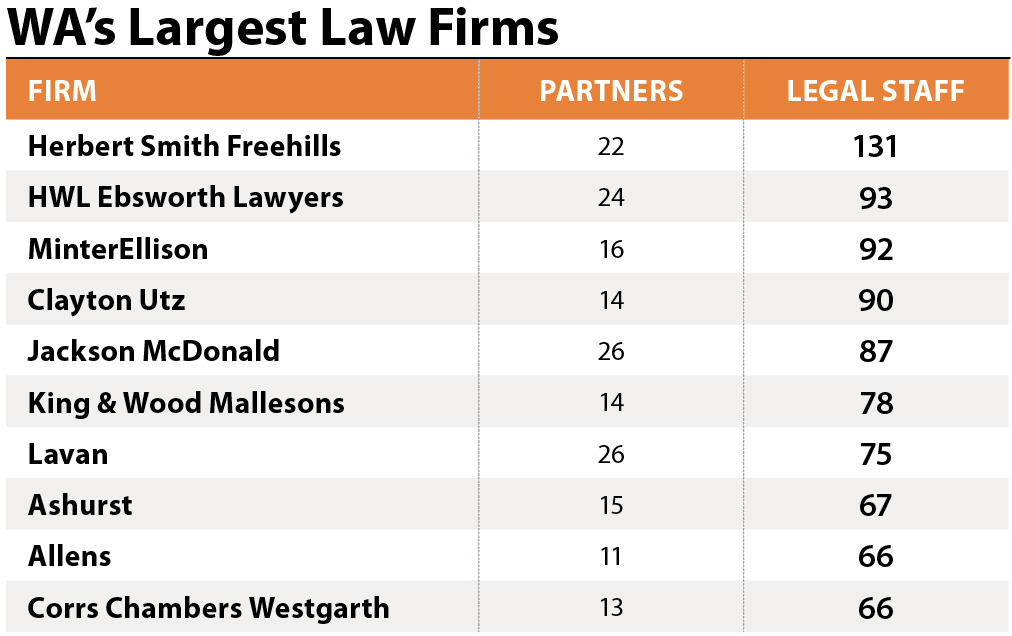 Meanwhile, Bennett + Co has grown to be Perth’s 14th largest law firm, with the number of legal staff increasing over the past year from 34 to 51.

Martin Bennett, widely regarded as one of Perth’s leading counsel, heads the firm.

Aged in his mid 60s, Mr Bennett doesn’t like talk of retirement.

“I don’t envisage winding back,” he said.

Nonetheless, he is focused on building capability so the firm is not reliant on him.

“We’re trying to deal with it, not as a brand attributable to me but as a process we teach, of how to approach major litigation,” Mr Bennett said.

He drew the analogy of running a Michelin-star restaurant.

“Everybody has a role to create the end product.

“You need to teach that methodology so it is applied across the board.”

Mr Bennett, who is a tall man with a booming voice, said staff development included teaching advocacy in a gender-specific manner.

“If you can’t dominate physically, you dominate through precision and preparation, it’s the detail that will enable you to succeed,” he said.

Bennett + Co has been boosted by a number of experienced lateral hires, including David Stewart, Thaw Thaw Htin, and Colette Davies.

New hires have helped the firm build capability in areas such as intellectual property, leasing, corporate, and regulation.

“We will always be a litigation-based firm, always,” he said. 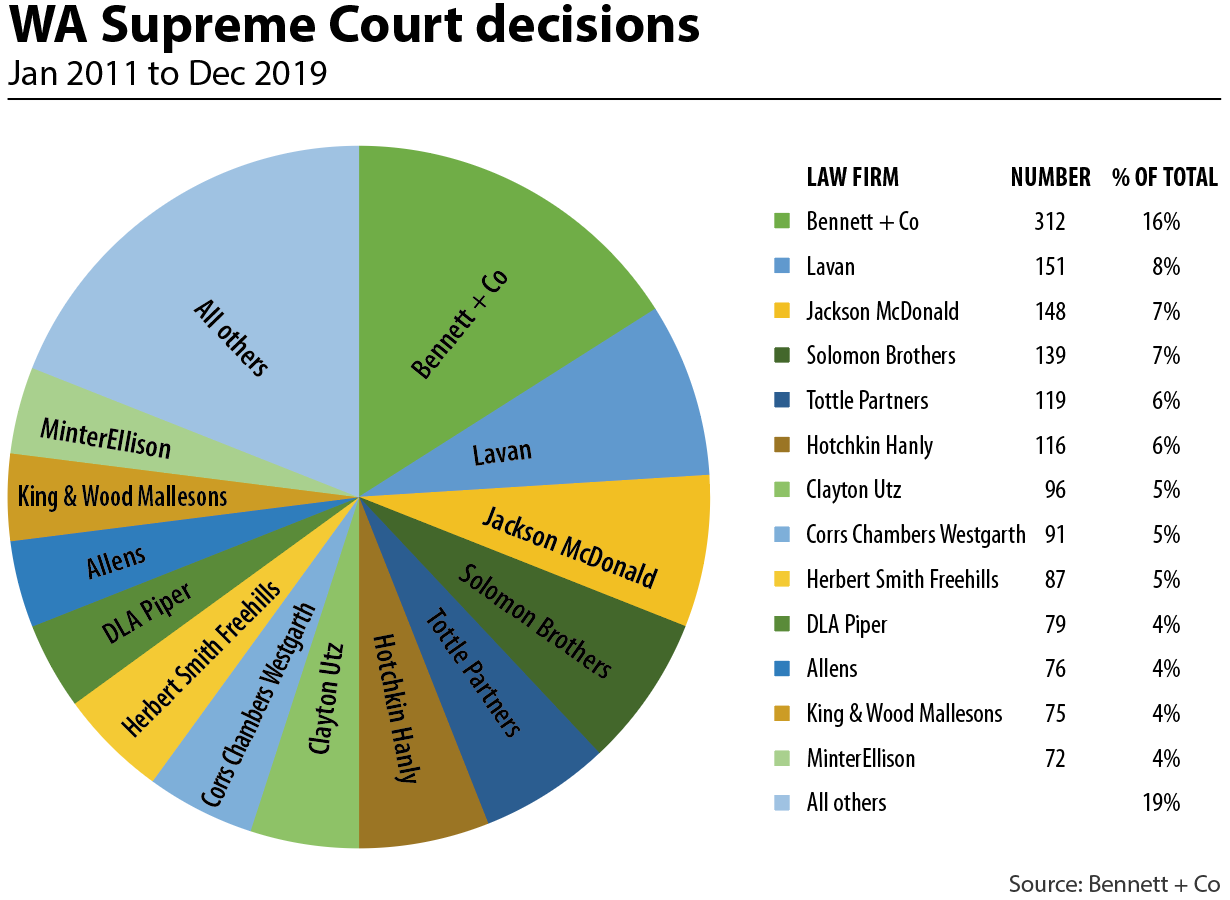 Since 2011, when Mr Bennett left Lavan to re-establish his own practice, his firm has been involved in 312 reported Supreme Court of WA decisions. The analysis does not distinguish wins and losses.

That was 16 per cent of the total civil cases, well ahead of competitors such as Lavan (8 per cent), Jackson McDonald (7 per cent), and Solomon Brothers (7 per cent).

In Court of Appeal decisions over the same period, Bennett + Co represented parties in 57 cases, or 12 per cent of the total.

That put it on par with Lavan and just ahead of Jackson McDonald.

This analysis is based on number of cases and highlights the profile of Perth-based law firms, which occupy the top six spots on the list.

If the analysis was based on value, the big national and international firms such as Clayton Utz and Herbert Smith Freehills may rank much higher.

Herbert Smith Freehills continues to be ranked the largest law firm in WA, with 22 partners and 131 legal professionals, according to BNiQ.

“While the virus slowed things down, and there’s more global angst to come, in due course things will speed up again, so the direction is the same,” Mr Joyner said.

“We continue to back WA growth, notwithstanding some sluggishness over the last few years.”

He said a key driver would be investment in infrastructure and resources projects.

“They are investing in a digital future, and we are too.”

“We know that digital is a top priority of 90 per cent of chief executives, and a driver for the digital law group going forward is to develop the digital law solutions and products that will help deepen digital resilience in business and become the industry standards of tomorrow,” Mr Joyner said.

MinterEllison, which has consolidated its position as one of WA’s largest law firms over the past year, has had a patchy performance in recent months, like most of its peers.

Service lines such as workplace disputes, insurance, and regulation were also up.

Areas that had declined include mergers and acquisitions, private equity, and property.

MinterEllison has one of the largest workplace practices in WA, and partner Kathy Reid said the past few months had been a busy time.

“A lot of clients needed to rethink their business models,” Ms Reid said.

While smaller clients were able to adapt quickly to issues around COVID-19, larger firms found it harder to change.

Ms Reid said many clients had been hoping to springboard into the recovery, but were recognising there would be lots of hard grind.

Her experience was that most clients were across COVID-19 issues and were now swinging back to longer-term issues, such as dealing with modern awards and enterprise agreements.

Clayton Utz partner in charge Nick Cooper said the size and diversity of his firm’s practice had helped it weather the COVID-19 disruption.

Workplace relations, employment and safety, planning and environment, and insolvency had remained busy, along with pockets of litigation.

He said the government, major projects and construction had been extremely busy, as governments sought to invest in infrastructure.

He said the court system has operated effectively through COVID-19.

“Fortunately, courts and litigators were already relatively well placed in terms of use of technology in court process,” Mr Cooper said.

“Online filing of court documents has been in place for some time in the WA Supreme Court and Federal Court.

“Telephone and videoconferencing were already in use for some hearings.

“That said, courts have adapted quickly to a more digital environment.

“Case management and non-contentious hearings have moved online, taking place either by phone or videoconference, ensuring that, where possible, major pieces of litigation can move forward efficiently.”

International law firm Squire Patton Boggs has achieved substantial growth over the past year, with 54 legal professionals in its local practice.

Managing partner Tony Chong, who joined the firm two years ago, said there had not been a shift in strategy.

“What you are seeing over the past year is the fruition of our strategy, doubling the partnership size in Perth over the last 12 to 18 months,” he said.

“We have always faced north to Asia when seeking opportunities to grow and diversify the WA business.”

Multiple recruits in areas as diverse as shipping, commodities, energy and real estate had boosted the firm.

Mr Chong said the response to COVID-19 was a mixed bag.

“The immediate weeks after the restrictions were imposed saw many teams swamped as clients sought urgent advice on their contractual rights under leases, employment agreements, and in relation to procurement and delivery of services,” he said.

“Other areas, such as M&A and some development projects, have been paused due to the uncertainty of the market.

“Our corporate teams instead have been busy assisting clients to restructure and to arrange refinancing or other arrangements.”

“We are already seeing a rise in trade law work,” he said.

“Likewise, our energy team and our commodities and shipping group are struggling to keep up with the workload as supply chain issues have knock on impacts around the world.”

This included its regional presence, with four offices linked to Perth-based specialists.

Mr Creek said most practice areas had continued to be busy, including employment, commercial litigation, wills and estate planning.

“Property, commercial and all things development have been very quiet, but that was to be expected,” he said.

“In terms of litigation and court appearances, reasonably quickly the courts adopted electronic solutions,” she said.

“Obviously, due to restrictions we saw a decline in matters within the tourism and hospitality sector.”

Ms Tylich cautioned that the full impact of COVID-19 was yet to play out.

“We believe that the major impact on the economy of COVID-19 is in front of us, not behind us,” she said.