SPECIAL REPORT: The mergers and acquisitions market was eventful in the March quarter, with Chinese and private equity investors to the fore, multiple WA businesses on the block, and a surprise advisory switch on a key takeover. 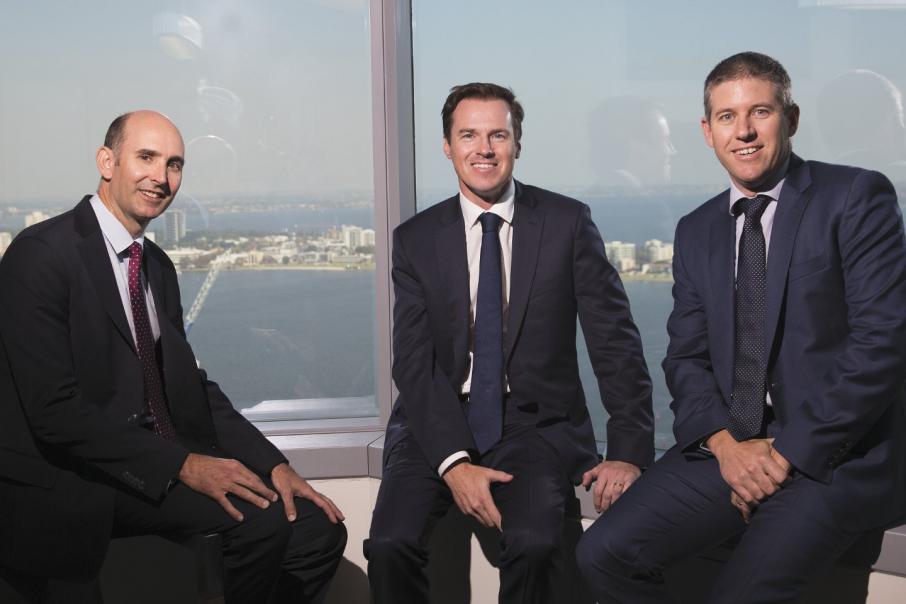 It is unusual for one advisory firm to encapsulate the key themes currently running through a market, but that appears to be the case with Azure Capital.

Azure has had a busy start to the year, closing three M&A deals, working on three major financing deals and, most surprisingly, taking a lead advisory role with Macmahon Holdings.

That stands in contrast to many other advisory firms, which are facing modest opportunities.

The BNiQ Search Engine has recorded just 67 Western Australia-focused mergers and acquisitions announced in the March quarter worth $5.9 billion. 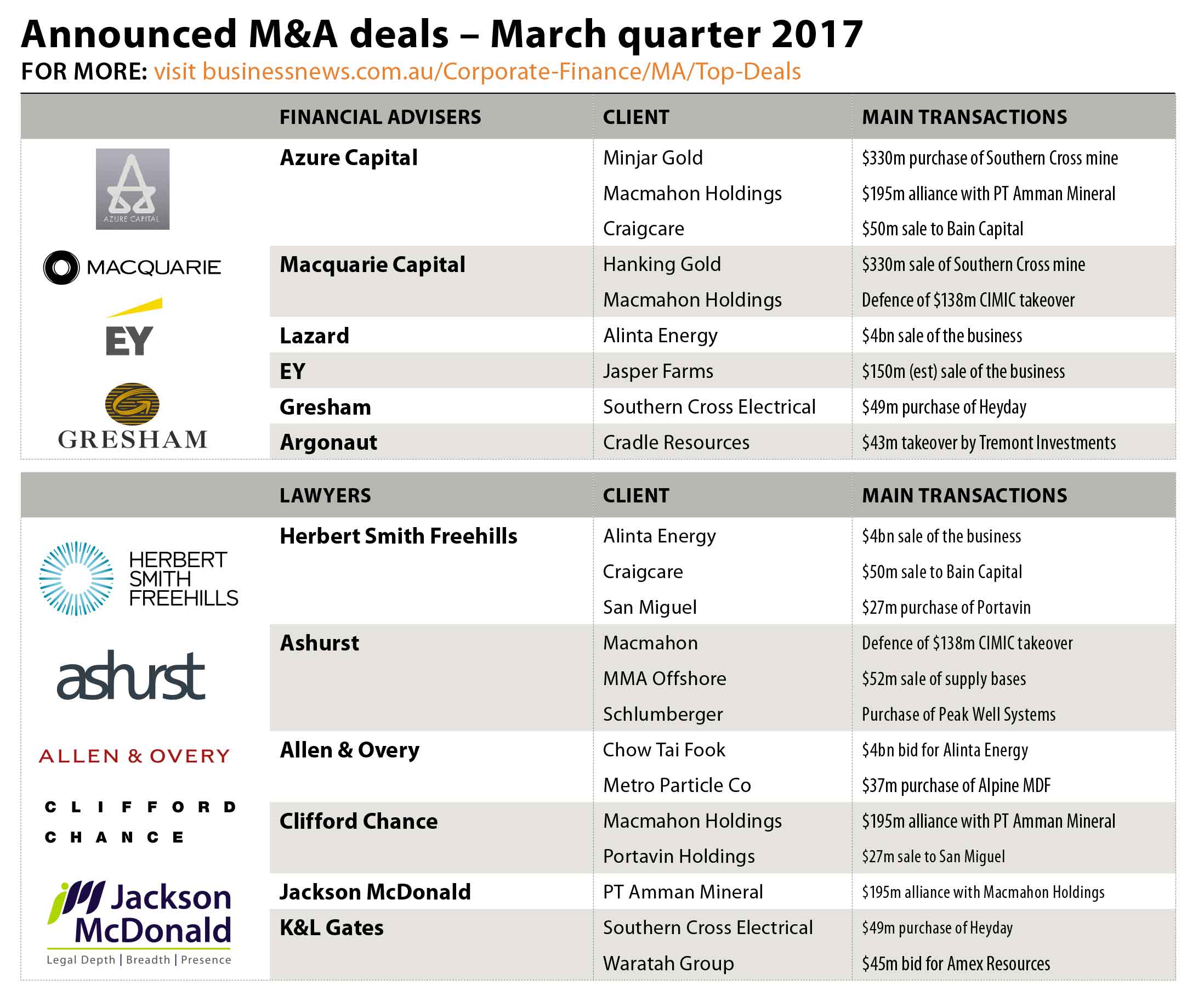 The deals Azure has closed this year include Minjar Gold’s $330m purchase of the Southern Cross mine and Bain Capital’s $50 million purchase of aged care provider Craigcare.

They reflect the appetite of Chinese investors for Australian assets and the renewed enthusiasm of private equity funds.

“Since the start of this year, I’ve seen some of the biggest private equity funds in the country in Perth,” Mr Arundell said.

“They are out hunting around for deals and last year they didn’t want to talk.”

On the financing front, Azure’s latest deal, announced this month, was advising livestock exporter Wellard on a $52 million capital raising.

This shows some businesses still need to strengthen their balance sheet.

On a more positive note, Mr Arundell has seen renewed interest in the mining sector, which augurs well for project financing deals Azure is working on for clients Sheffield Resources and Heron Resources.

“It’s a pretty stark contrast to 12 months ago.”

He said large-scale international project financiers were coming out of the woodwork.

“If you can get those deals away, that’s a really positive sign for the market because it’s at the higher end of the spectrum in terms of due diligence and creditworthiness,” he said. 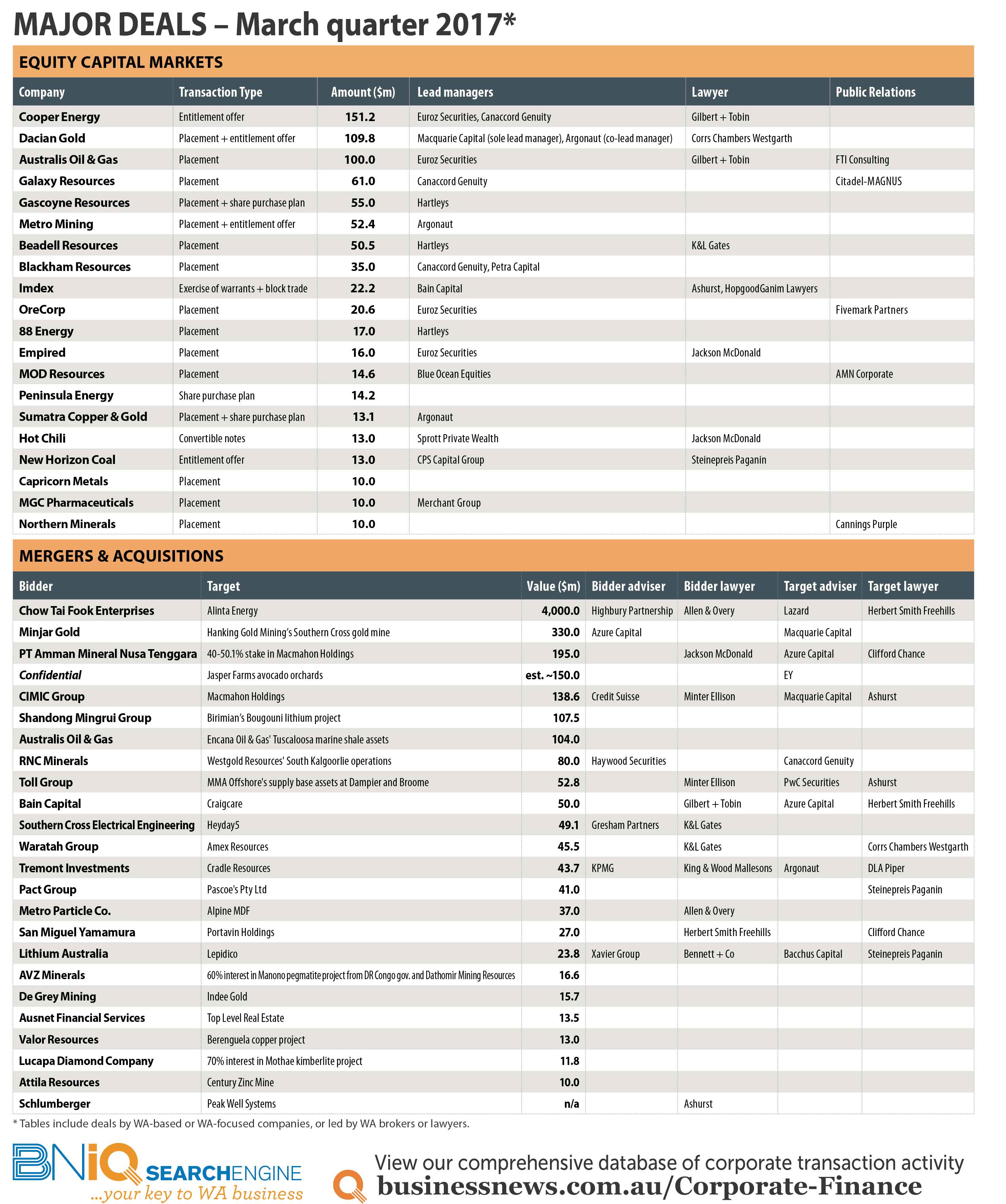 Arguably the most interesting developments in the M&A sector this year have revolved around mining contractor Macmahon Holdings, which delivered several surprises.

One was its ability to fight off CIMIC Group’s hostile $138 million takeover offer.

Cimic is renowned for its aggressive and highly successful takeover tactics, with UGL, Sedgman and Devine having fallen in recent years.

Macmahon’s poor operational record in recent times made it highly susceptible but its board, led by chairman Jim Walker, was not for turning.

With Macquarie Capital and Ashurst as key advisers, it fought off Cimic’s low-ball offer, which was judged neither fair nor reasonable.

Macmahon also fended off an application to the Takeovers Panel, after Cimic claimed the target’s statement was misleading and deceptive.

Cimic ended up with a 23.64 per cent stake after its bid closed, only a small jump from its holding before the takeover was launched.

One of the keys to Macmahon’s success was a heads of agreement with Indonesian mining company PT Amman Mineral Nusa Tenggara, which it announced mid takeover.

Under this novel deal, Macmahon will pay $US150 million ($195 million) for equipment from PT Amman and secure a long-term mining contract. In return, the Indonesian group will acquire between 40 per cent and 50.1 per cent of the contractor.

Macmahon is now busily working to close the agreement, but surprisingly it has new advisers.

Post the Cimic battle, however, it appears Macmahon’s advisers, Macquarie and Ashurst, have decided to walk away from their Perth client.

Both Macquarie and Ashurst have previously advised Cimic on other takeover deals.

The winners from this are Azure Capital and Clifford Chance, which were engaged last month as Macmahon’s new advisers on the PT Amman deal.

With Cimic sitting on its 23.64 per cent stake, and a history of not giving up on a takeover target, it seems that Azure and Clifford Chance could also find themselves with a new defence mandate before long – especially if Macmahon has any stumbles.

The Chinese appetite for Australian assets was highlighted by the surprise $4 billion bid for Alinta Energy by little-known group Chow Tai Fook Enterprises.

This followed Minjar’s $330 million purchase of the Southern Cross gold mine.

The Minjar deal was unusual because the vendor, Hanking Gold, was also Chinese.

A further guide to Chinese appetite for Australian mining assets is the prospective sale of Barrick Gold’s 50 per cent stake in the Kalgoorlie Super Pit, with Minjar named as a likely bidder.

These deals come after a much larger Chinese acquisition was announced late last year.

One China deal that fell through was the proposed $107 million purchase of Birimian’s Bougouni lithium project in Mali.

There has been further evidence in the WA market that private equity funds are aiming to transact, on both the ‘buy’ and ‘sell’ side.

As well as the Bain Capital deal, Denham Capital-backed Tremont Investments has bid for full ownership of its joint venture partner, Cradle Resources.

These purchases come after private equity group EMR struck a deal late last year to buy the Golden Grove mine from China’s MMG.

On the ‘sell’ side, the biggest transaction was the sale of Alinta Energy, which has been owned by private equity groups, notably TPG Capital, for several years.

Several other WA-focused businesses that are owned by private equity, such as mining contractor Barminco and haulage contractor Bis Industries, are sure to be looking at the market to assess sale and refinancing options.

Four significant private businesses changed hands for very substantial sums in the March quarter, with an even bigger private deal in the works.

Jasper is one of the country’s largest avocado growers and is expected to fetch a price of between $100 million and $200 million.

Completed deals in the quarter included the sale of family owned Craigcare.

Another long-running family business that changed hands was chemical manufacturer and supplier Pascoe’s.

Brothers David and Ian Schwartz signed up law firm Steinepreis Paganin to handle the sale of the business to ASX-listed Pact Group for $41 million.

Wine bottling and packaging business Portavin Holdings, which was established in WA in 1989 and now has national operations, was sold to San Miguel for $27 million.

The business had six shareholders, including founder Mike Davies, who will continue as general manager.

Law firms Clifford Chance and Herbert Smith Freehills worked on the two sides of the transaction.

A low-profile deal completed in January was the sale of specialist oil and gas services company Peak Well Systems to global giant Schlumberger for an undisclosed sum.

In contrast to these sales, there was a conspicuous shortage of WA businesses making substantial purchases in other markets.