Major redevelopment projects are transforming Perth’s CBD, but only one precinct seems to be attracting anchor tenants. 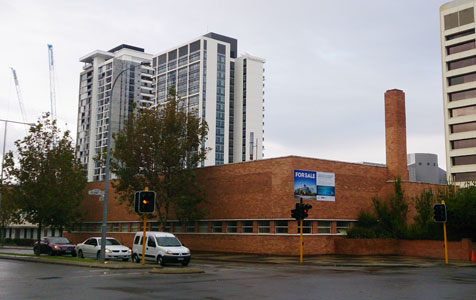 The heritage-listed building at the chem labs site in East Perth.

Major redevelopment projects are transforming Perth’s CBD, but only one precinct seems to be attracting anchor tenants.

Developers are being sought for the third government-owned site at the Riverside redevelopment in East Perth, but it is the Perth City Link that has emerged as the first choice for commercial tenants, with the flagship Elizabeth Quay project also lagging behind in the race for signatures.

Planning Minister John Day launched an expressions of interest campaign last week for the 5,335 square metre former chem labs site on the corner of Hay and Plain streets in East Perth, which has the potential for a mixed-use residential, retail and commercial project up to 16 storeys.

But Mr Day said the existing Materials Sciences building on site would have to be incorporated into the redevelopment, with it ideally being converted into a supermarket.

“Quite a few people would be surprised that that part of the building is heritage listed, but it does have its own place and role in the architectural history of Perth,” Mr Day told reporters at the launch.

“I want the heritage council to explain their position a bit more fully than what I’m informed at the moment, but we do accept that some of these buildings … are worthy of being kept and incorporated in a new development.”

Mr Day said he expected the project to provide a positive return from the sale of the land to a developer.

“More importantly, we are going to get the provision of higher density but also higher quality housing development in this part of Perth,” he said.

Metropolitan Redevelopment Authority acting chief executive Sean Henriques said the heritage listing would not pose any particular extra challenges to the site, or add to the potential cost of the redevelopment.

“In general, the redevelopment authority has a good track record in dealing with heritage assets and heritage buildings, in particular for that one … we don’t believe it has a significant impact,” Mr Henriques said.

“What we do have to address is to make sure the planning framework enables the heritage to remain to enable the development, but also allow the developer to come in and actually wrap a mixed-use development around it. “

He said the MRA had also flagged the development of a high street with cafes and other retail amenities on De Vlamingh Avenue, which is the eastern boundary of the chem labs site.

Meanwhile, Lend Lease remains in the market for a major tenant for its $1 billion Waterbank project in the Riverside redevelopment area, which is flagged to comprise more than 1,000 apartments and between 16,000 and 24,000sqm of office space.

To date, Lend Lease’s activity in the area has largely been preparation works, with ground compaction and consolidation ongoing to improve the site’s stability.

Lend Lease project director Tim Urquhart said the developer had recently completed community consultation to gauge what residents and visitors would like to see at Waterbank, with major works on the project slated to begin early next year.

The third building, the 107-dwelling QII apartment project, is being built by Jaxon Construction and is scheduled to be complete in July next year.

Construction of a fourth building, the 36-apartment QI, is yet to be confirmed.

“The Riverside project is one of three transformative projects that are being undertaken by the state government through the MRA, and it is true that Elizabeth Quay and the Perth City Link have achieved a much higher profile, but I don’t think that most people appreciate that this is also an important part of the redevelopment of the CBD,” Mr Day said.

“I think as people see more development over the next two to three years they will understand this area is an important part of the overall plan.”

Accor said it had signed a management agreement with Perth-based Rehawk Property Group to develop the hotel.

Rehawk Property Group, which is equally owned by Victor Hawkins and Phillip Re, bought the site in December 2012 from Diploma Group for $4.8 million.

However, it is the Perth City Link that is firming as the precinct of choice for commercial tenants, with global energy giant Shell, health insurer HBF, and construction company John Holland already confirmed to be taking up leases at Leighton Properties’ Kings Square.

Engineering firm KBR is also understood to have signed up for between 4,000 and 5,000sqm of office space in one of the four towers.

In total, 55 per cent of the office space across Kings Square towers 1, 2 and 3 has already been spoken for.

At Elizabeth Quay, the only occupant set in stone is the Ritz Carlton Hotel, while global energy giant Chevron paid $64 million in November last year for a 6,795sqm site on the corner of Barrack Street and The Esplanade.

Under the project’s design guidelines, Chevron can build a maximum of 36 storeys on the site, which would cost between $800 million and $900 million.

However Chevron is yet to announce when construction is likely to begin on the tower, and seven additional commercial development lots remain on the market at Elizabeth Quay.

Another major CBD redevelopment project is the old Emu Brewery on Mounts Bay Road, where Probuild is carrying out earthworks and piling operations for a 41-storey residential tower approved by the City of Perth development assessment panel in July last year.

Also approved for development at the site are a 30-storey office building and a 120-room hotel, but to date the City of Perth had only issued a building permit for forward works for the first stage of the project.