Long-time Liberal frontbencher Ian Macfarlane has moved to the Nationals, just weeks after he lost his role as minister for industry and science in Malcolm Turnbull’s cabinet reshuffle. 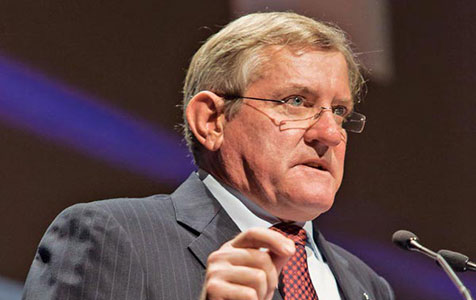 Ian Macfarlane served as minister for industry under both Howard and Abbott.

Long-time Liberal frontbencher Ian Macfarlane has moved to the Nationals, just weeks after he lost his role as minister for industry and science in Malcolm Turnbull’s cabinet reshuffle.

The shift takes the number of Nationals in federal parliament to 22, although Mr Macfarlane will remain as a member of the Liberal National Party in Queensland.

The Queensland arrangement is unique, following a merger of the Liberal and National wings in the state in 2008.

Under the rules of that agreement, federal members from Queensland campaign under one banner but can join either the National or Liberal federal party room upon election.

A potential shift between these two has fuelled speculation Mr Macfarlane could be considered as deputy leader of the Nationals when current leader Warren Truss retires.

That could prompt a return to the frontbench for Mr Macfarlane.

“He and I have been friends for a long time, he and I grew up together,” Mr Truss said before Mr Macfarlane publicly confirmed his decision.

“He’s contributed significantly to the government.”

Mr Macfarlane has been the member for the regional Queensland electorate of Groom, based on Townsville, since 1998.

Before the move is finalised, he reportedly pledged to seek the views of his local district council.

He was first promoted to the ministry in January 2001, when he became minister for small business.

Later that year, he became minister for industry, a position he held until the Labor Party won power in 2007.