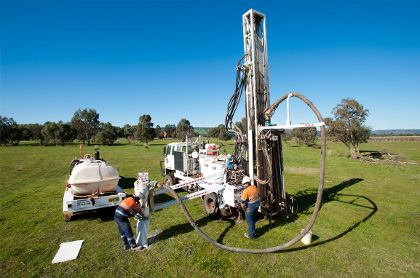 Drilling operations at the Keysbrook project, 70km south of Perth.

The firm formerly known as Matilda Zircon announced today that it had appointed an Australian financier and a South African bank as lead arrangers for the debt facilities, but the company did not disclose their identity.

The company said debt funding for Keysbrook would provide the best return to shareholders while maintaining sustainable debt limits.

Chief executive Trevor Matthews said the project's technical and economic strength had attracted the support of the banks.

MZI released a maiden ore reserve of 670,000 tonnes of heavy mineral sands at Keysbrook in October, while flagging an 11-year mine life.

“As the feasibility study showed, Keysbrook will enjoy robust cash operating margins even at current mineral sands prices to to its high value mineral assemblage,” Mr Matthews said in a statement.

“These margins, combined with the relatively low capital cost and short construction timeframe may Keysbrook a low risk development.”

“With the financing mandates now in place, we remain on schedule to be in production by Q4 2013 and generating cashflow following first product shipments from the Bunbury port in Q1 2014.”