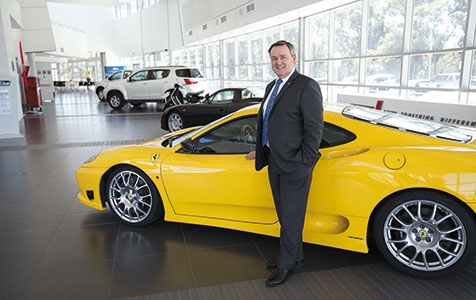 WORK IN PROGRESS: Like other associations, Stephen Moir says the MTA has worked hard to diversify its income. Photo: Attila Csaszar

The latter adopted the MTA WA banner as part of the merger, with the MTA taking over the running of MITA’s training and apprenticeship courses.

The MTA subsequently moved into MITA’s facility in Joondalup while leasing out its former home in Rivervale.

Chief executive Stephen Moir told Business News the merger had taken the association from an annual turnover of $4 million to $16 million.

What the merger and subsequent move to Joondalup meant, however, was that trainees in the southern corridor had a much longer journey to the MTA’s training facilities.

“Being 26 kilometres north of the metro area it does limit the number of young people who are prepared to make that travelling commitment,” Mr Moir told Business News.

“One of the areas we have to look at is how we can establish a facility for our students in the southern corridor.

“Everybody on the board agrees that it’s necessary to try and establish a presence in the southern corridor, we’ve just got to find the right property and the right way of delivering that for the student’s benefit and for the industry’s benefit.”

Mr Moir said the expansion would likely take place during 2015.

The MTA’s absorption of MITA services is indicative of a trend within WA’s associations to diversify income across business segments.

Other associations have also focused on training to provide income and are investing further. Among them is the Master Builders Association, which is considering investing in an immersive training centre.

Mr Moir said there was no way an association could survive on membership fees alone.

“Membership and membership services still form the absolute purpose of our being and they’re still our number one priority, but from a business point of view you cannot simply rely on that,” he said.

Mr Moir said membership fees accounted for about 30 per cent of total revenue and membership numbers had stagnated at around 2,000.

“We’re holding our ground with membership, which I think in this environment is actually quite a good position to be in,” he said.