OPINION: Has the horse bolted in terms of the way Google and Facebook have changed mainstream media? 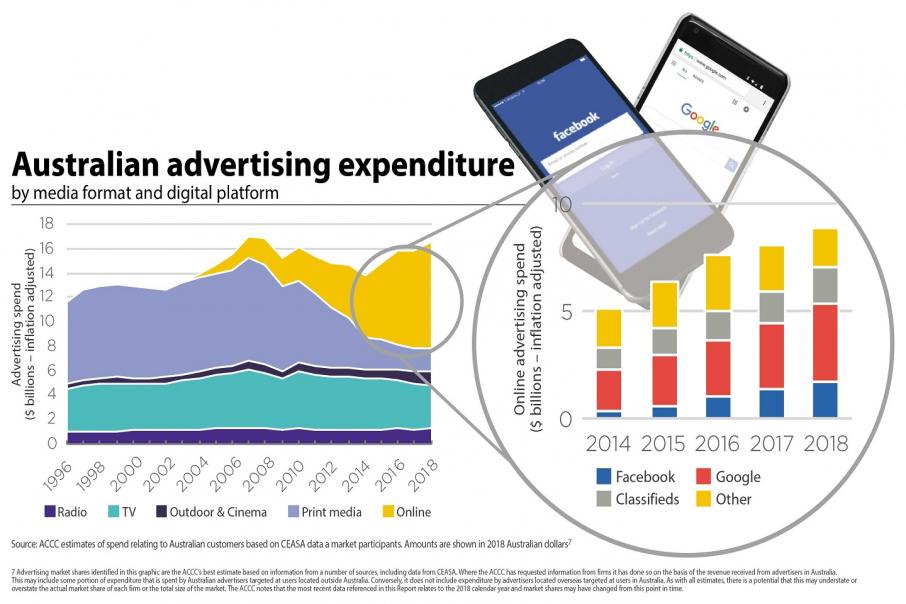 OPINION: Has the horse bolted in terms of the way Google and Facebook have changed mainstream media?

It is the latter – major issues around data privacy, democracy and the way younger generations’ lives are being altered – that prodded this inquiry.

But the canary in the coalmine was the financial impact of two foreign players (Google and Facebook), which has decimated traditional media businesses, many jobs and, most likely, a tax revenue base.

The ACCC report’s best graphic, using data from the Commercial Economic Advisory Service of Australia, illustrates just how much impact these two US-based giants have had on an industry that was mainly in Australian hands two decades ago.

Online advertising now represents half of the Australian advertising market, and Google and Facebook have the lion’s share of that.

Overall, they have a third of the whole ads market, a share that understates their power because almost all other media organisations now focus their own external promotional spend online.

That means traditional media is paying or subsidising Google and Facebook just to retain their audiences.

Most are failing. Australian Taxation Office figures from 2016-17 are the most recent available numbers to compare these foreign giants against local players.

The numbers tell me that, except for outdoor ad business oOh! Media, all the main media players in Australia that year had single digit margins when the taxable income (profit) was divided by total income (revenue).

Facebook and Google have nearly 13 per cent and 12 per cent, respectively; and that is not accounting for various issues around where revenue was earned (and therefore taxed) or whether GST was paid on it.

Little wonder, then, that Fairfax merged with Nine Entertainment and Ten Network succumbed to foreign ownership.

The numbers above don’t account for other, more recent, developments in Australia such as Netflix, which is challenging television channels, and Spotify, which is cutting the lunch of radio stations.

Nor does it show the impact on bookshop sales by Amazon.

Of course, there are many things I like about all these options that have emerged in the past 20 years.

I might also add that much of the regulation now handicapping traditional media was encouraged by the sector in more profitable times as a high barrier to entry.

The best answer is for regulation to be light, consumer-focused and keeping pace with developments.

As for social media, much of the regulation was available but governments have been afraid of upsetting young voters by applying it.

While Australian broadcasters have had their licences protected by rules enforcing local content and blanket restrictions on when certain shows can be aired, social media has no such boundaries. How can that happen? Social media knows much more about its users, yet blocking unsuitable content is left to parents or the police, with difficulty.

Of course, low profitability in traditional media is not historic.

The classifieds section provided daily newspapers with incredible market domination in the past. They would argue they used it for ‘good’ by funding journalism to win more newsreaders and make themselves more valuable to advertisers.

Now, that domination has shifted to social media.

What good things do they fund?

Perhaps better connectivity for families and friends is a welcome new service, but allowing dark forces to misuse social media to undermine democracy is an unwelcome development.

Perhaps a major difference is that social media giants have no allegiance to our democracy. Furthermore, the manipulation of a jurisdiction can be short term, anonymous and done without the need to own a major media asset.

Strangely, mainstream media’s survival mechanism has been competing with social media in terms of eyeballs while at the same cutting costs as profits decline.

Geographically, news and current affairs is increasingly centralised. And don’t get me started about sport, where ubiquitous news about professional sports has all but drowned out lesser codes without content to easily share.

Ironically, those involved in less commoditised sport genres and people wanting to deal with local community issues have been forced to use social media to connect with like-minded people. And so cycle feeds on itself.