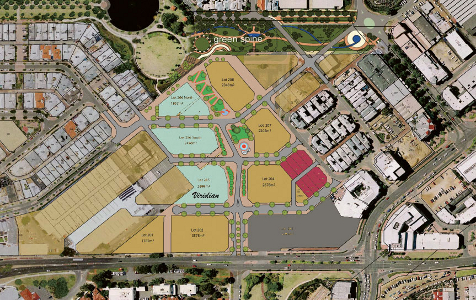 The long-running Subi Centro redevelopment is entering its final phases, with Otan Property Funds Management selected to develop one of the last remaining parcels of land at the historic Australian Fine China site.

Otan, in conjunction with construction firm Pindan, plans to build three apartment developments on the three separate blocks (shaded green on the plan above), located within the 4.4 hectare AFC precinct.

The project will comprise 175 one, two and three-bedroom apartments, ranging from luxury to affordable accommodation, and will have an end-value of more than $130 million.

The Metropolitan Redevelopment Authority said the project would also incorporate heritage elements of the site, including the historic porcelain factory's calyx wall and tunnel kiln structures.

Marketing for the first building, Veridian, has already commenced.

Otan managing director Mark Butler said he was pleased Otan and Pindan had been selected for the final large residential development at the AFC site.

The residential developments are adjacent to QUBE Property Group’s Subiaco Green office development (shaded grey on the map above), on the corner of Hay Street and Roberts Road.

The Metropolitan Redevelopment Authority appointed QUBE in June to develop the Subiaco Green project, on the Subi Centro plot set aside for a commercial development.

The project will add more than 8,000 square metres of office space in its first stage, with the subsequent second and third stages to add a further 14,000sqm.

Around 86 per cent of the Subi Centro project area is now complete, the MRA's chief executive, Kieran Kinsella, said.

At the AFC site, eight of nine residential lots (shaded pink on the map) have been snapped up already, while 6,000sqm of office space is set to be developed at the Hood Street precinct.

Construction is also continuing at Pindan and QUBE's residential and retail developments at Centro North, with that project expected to be complete by next year.

Otan and Pindan are also in the middle of building a retail and apartment development at Centro North, known as North One.