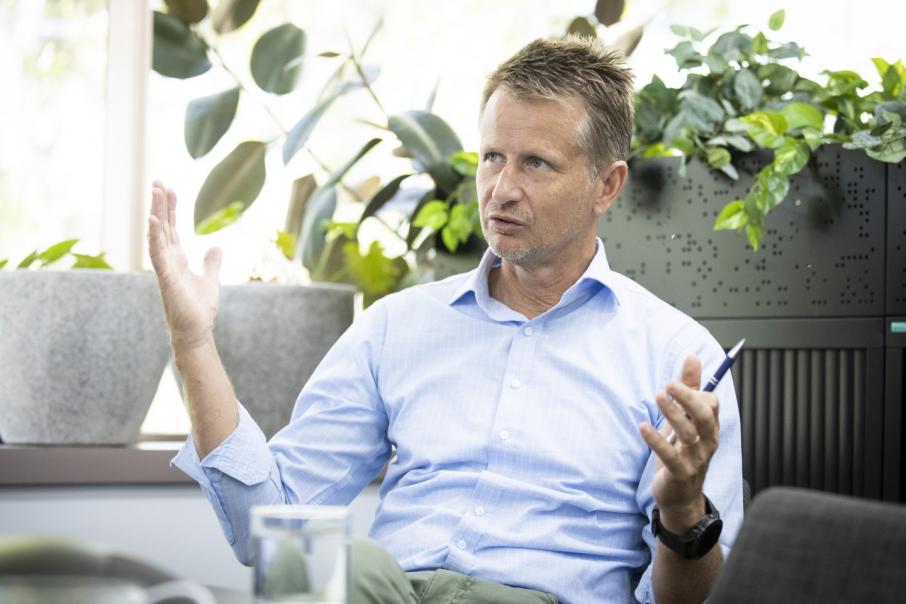 A rule of thumb in takeovers is that the bidder’s share price falls after a deal is announced while the target’s share price rallies.

The biggest M&A deal of the year is a case in point.

The share price of both Northern Star Resources and Saracen Mineral Holdings rallied in the weeks after they announced a ‘merger of equals’ in October.

Similarly, MACA’s share price is up strongly since it unveiled the $175 million purchase of Downer’s western region contract mining business.

The biggest gains, however, have been enjoyed by Pilbara Minerals’ shareholders, since the company announced in late October it planned to acquire Altura Mining’s lithium operations.

Helped by a recovery in the global lithium market, Pilbara’s share price has nearly tripled over the past three months.

The $US175 million Altura deal, which is close to completion, will enable Pilbara to extract large operational synergies by bringing together two neighbouring mining operations.

It will also go down as one of the most deft M&A deals of recent years, with Pilbara announcing a conditional agreement with Altura’s creditors just two days after the struggling miner was placed in receivership.

Pilbara was advised by law firm Allen & Overy and investment bank Macquarie Capital, which topped Business News’ league tables for both M&A and capital raisings in 2020.

Managing director Ken Brinsden said he was able to act swiftly because of the work Pilbara had done in previous months and years.

“Knowing that Altura was running out of rope, we were ready to act at short notice,” Mr Brinsden told Business News.

“The main reason that happened was because we had already brought the financiers along with us during the course of 2020 for the purpose of refinancing our [Nordic] loan.

“They were quite close to our business anyway.”

“We were running multiple streams for refinancing the Nordic bond,” he said.

That played a part in AustralianSuper and private equity investor Resource Capital Funds signing up as major backers of its $240 million capital raising.

Mr Brinsden disclosed Pilbara and Altura had engaged in numerous discussions over the years about operational synergies from their neighbouring operations.

This resulted in an MOU, which subsequently expired.

“The big elephant in the room that never got resolved was, what do we do with the tenement boundary that sits between the two operations,” he said.

“The reality is, it has the effect of sterilising ore, in particular on the Altura side of the fence.”

He also recalled discussions, soon after joining Pilbara, about a friendly merger.

“Going back a long way, there was a discussion about whether there was a merger to be done, one direction or the other, but we could never agree terms,” he said.

In addition, Mr Brinsden said Pilbara had been in discussions over the past two years with Altura’s lenders.

“I think their logic in talking to us was to say ‘what’s this lithium business, what are you guys up to?’” he said.

“That led to on-and-off dialogue to say ‘there might be an opportunity, we should keep in touch’.

“That was the way they dealt with us.”

In the lead-up to Altura’s lenders placing the company into receivership, Pilbara had been one of several companies in Altura’s ‘data room’.

“We participated in that process in the knowledge we might be part of their refinancing solution,” Mr Brinsden said.

“The conclusion we came to was that it was very difficult to make an investment in Altura because in essence there was no equity value.”

The poor state of the Altura business was highlighted by administrators Cor Cordis.

In a report to creditors, it said Altura had not been profitable since 2018 and had been insolvent since at least February 6 2020.

The Cor Cordis report said two parties submitted bids for Altura, though the second bid was withdrawn after it made further enquiries.

Mr Brinsden said his team was working on ways to integrate the operations but cautioned Pilbara was awaiting a stronger market recovery.

“We are not prepared to invest in a big way in growth until we get a very, very clear signal from the market,” he said.

“When we are making reasonable margins, we will turn our minds back to growth in production, which initially will include switching back on the Altura operations but certainly no sooner than the middle of this year.” 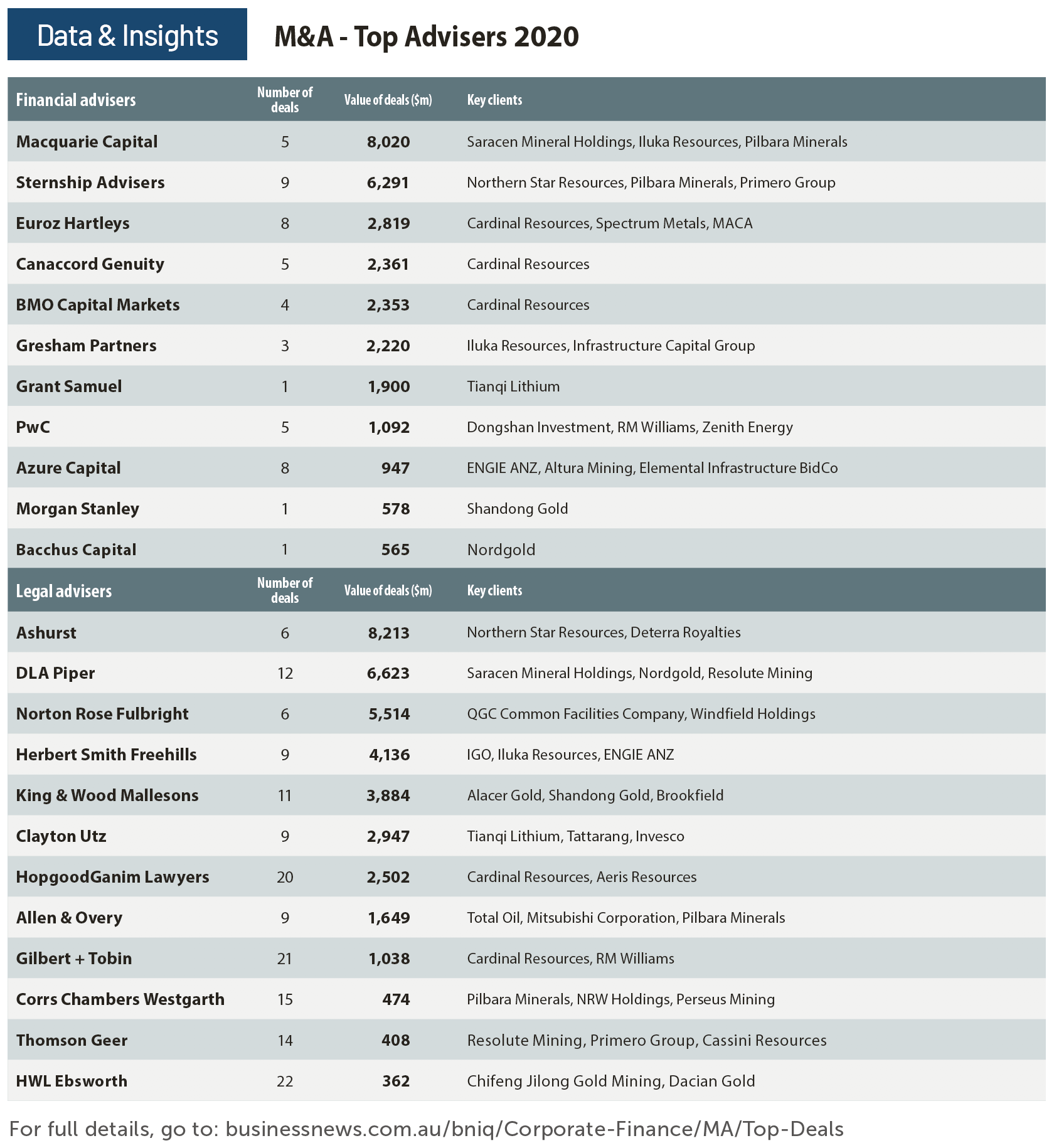 The Pilbara Minerals transaction was one of five M&A deals worth about $8 billion that Macquarie Capital advised on last year.

It also had a lead role on 10 WA-related ECM deals worth a total of $3.6 billion.

As a result, it topped Business News’ league tables for both M&A and ECM deals in 2020.

Director John Stanning said 2020 had been a volatile year, with the second half being particularly buoyant.

“It’s bounced back into one of the best year’s we’ve had,” Mr Stanning said.

In the M&A space, it also advised Saracen on its merger with Northern Star, to create a company with a combined market value of $16 billion.

Macquarie advised Iluka Resources of its demerger of Deterra Royalties and Downer on the sale of its contract mining business to MACA.

In addition, it advised Melbourne-based New Century Resources on the proposed acquisition of the Goro nickel mine in New Caledonia, however, this deal did not proceed.

The poor state of the Altura business was highlighted by administrators Cor Cordis.

In a report to creditors, it said Altura had not been profitable since 2018 and had been insolvent since at least 6 February 2020.

The Cor Cordis report said two parties submitted bids for Altura, though the second bid was withdrawn after it made further inquiries.

Cardinal had a team of four financial advisers – along with HopgoodGanim Lawyers – helping it deal with three takeover offers (and a fourth unsolicited proposal).

Chinese company Shandong Gold ended up winning the takeover battle, though only after lifting its bid price several times.

Azure Capital continued to rank as one of the busiest corporate advisers in the local market, working on eight transactions during the year.

This included helping Altura with its failed refinancing.

PCF Capital Group was another busy adviser, working on six transactions in the junior mining sector.

Ashurst topped the rankings for law firms, after advising on six transactions worth $8.2 billion.

By far the biggest was advising Northern Star.

It was followed by DLA Piper, which advised on 12 transactions worth $6.6 billion.

HopgoodGanim was one of the busiest law firms, advising on 20 transactions worth $2.5 billion.

As noted above, this included advising Cardinal Resources on three separate takeover bids.

Gilbert + Tobin also had a busy year, advising on 21 transactions.

It advised on six purchases by Tattarang, including its purchase of boot maker RM Williams.

A new addition to the list is Thomson Geer, which bought Perth firm LSV Borrello in June 2019 and poached most of DLA Piper’s corporate team in August last year.

As a result, DLA Piper and Thomson Geer both worked for the same clients on the same transactions at different times. 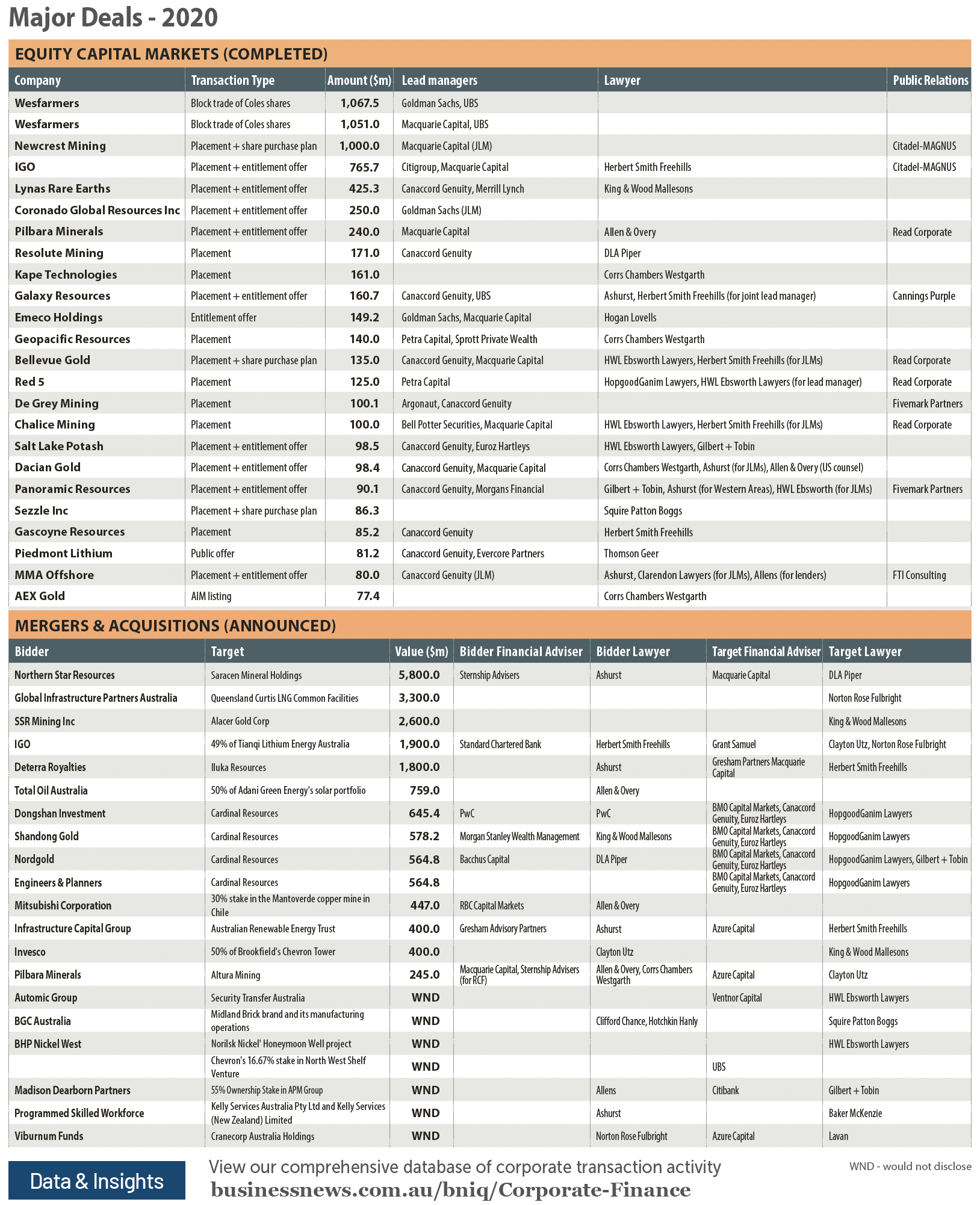 Mr Stanning said there would be two key drivers for M&A activity in 2021.

“I see more consolidation where there are logical deals to be done in Australia, across both gold and battery minerals,” he said.

“Shareholders have shown they will be supportive, and companies get good re-ratings, on logical accretive deals that make sense for both parties.”

He cited the Northern Star-Saracen deal, which brought together two companies that were already joint owners of Kalgoorlie’s Super Pit.

“Investors will support nil or low-premium transactions if the assets end up in the best hands.”

“Some of our clients certainly will be looking offshore, so that leg of growth will open again.”

He said the major transactions of 2020 were logical mergers where management could extract incremental gains from operational synergies.

“I think you will start to see more step-out transactions,” he said.

He cited the positive reaction to IGO’s Tianqi deal, which included a 25 per cent stake in the world’s largest lithium mine at Greenbushes.

“The market loves access to global, tier-one assets,” he said.