Tourists and business travellers will soon be spoilt for choice when it comes to luxury hotels in Perth, with a rush of new developments providing new options at five stars and above. 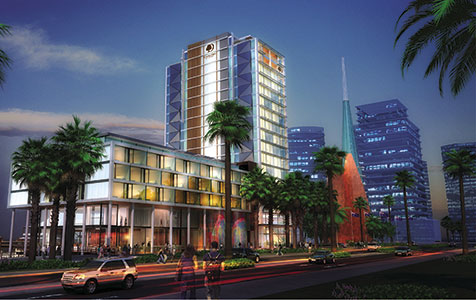 WELCOME: An artist’s impression of SKS Group’s DoubleTree by Hilton hotel, to be built at Barrack Square.

Tourists and business travellers will soon be spoilt for choice when it comes to luxury hotels in Perth, with a rush of new developments providing new options at five stars and above.

International chain Hilton Worldwide jumped on the burgeoning hotel development bandwagon last week, announcing it would build two of its boutique DoubleTree by Hilton properties, in Perth and Fremantle.

The Perth DoubleTree by Hilton will be built next to the Bell Tower at Barrack Square, while the Fremantle property will be located on Point Street.

The hotels, which are pitched at a luxury level, will add a total of 391 rooms to the market.

The DoubleTree by Hilton projects are being funded by SKS Group, the Perth-based subsidiary of Malaysian property investment group MB Group, which will spend $160 million developing the hotels.

Other luxury hotel projects confirmed to be going ahead are the 500-room, six-star Crown Towers at Burswood, Starwood Hotels and BGC Development’s 350-room Westin Perth, as well as smaller boutique developments in the 74-room Hotel Alex in Northbridge and the 48-room Old Treasury Hotel.

In all, more than 1,560 luxury rooms will be added to Perth’s accommodation sector over the next four years.

And that number could grow, with SKS Group holding an option to purchase a development site in Northbridge, where it is considering building a 16-storey, 200-room DoubleTree by Hilton hotel.

SKS Group general manager Francis Foong told Business News a decision would be made in around 30 days regarding whether to proceed in Northbridge.

Mr Foong said the group was also looking closely at the remaining development sites at Elizabeth Quay, flagging the possibility of constructing a five-star or six-star hotel to complement the Far East Consortium’s Ritz-Carlton on the waterfront.

Currently there are 2,161 rooms available in Perth rated at five-stars or above.

In 2013, Perth hotels had an average occupancy of 83.5 per cent, a report released last week by Colliers International said, down from more than 90 per cent in 2012.

Perth’s hotel market is evenly divided between the four groups of star ratings, Colliers International director of investment services Wayne Lawrence said, but the new developments in the pipeline could skew that distribution towards the luxury side of the market.

“To attract a higher level of spending guest or customer, higher end hotels are what is needed,” Mr Woods said.

“It’s not just about numbers, but it’s about guests and travellers and visitors that are what we called yield travellers, who will spend a lot more than the average guest.”

The Colliers report also showed nearly two thirds of Perth’s hotels were either built or converted from other uses before 1990, with only a handful of new developments occurring in recent years.

Mr Lawrence said the old stock was mostly below international standards, but the strength of the corporate traveller market and a limited supply of rooms didn’t provide any pressure to address the issue.

“With the resurgence of the tourism market and the introduction of these high-end premium operators to the city, we’re getting some new life in the sector and that will provide motivation for some of those existing operators to look at refurbishing and upgrading their facilities,” Mr Lawrence told Business News.

At the Hilton launch last week, Tourism Minister Liza Harvey agreed that the rollout of new hotels would drive existing operators to undertake renovations in order to compete.

“We are starting to see an upgrade of our existing stock, more competition coming onto the market, more opportunities and more beds for tourists, which is exactly what we want to see as a state government,” Ms Harvey said.

The government had previously identified a need for 1,900 new hotel rooms to be constructed by 2020.

With the Hilton announcements, the number of hotel rooms confirmed to be in the development pipeline is just less than 1,800.

“We believe the market could absorb 1,900 rooms and if we are looking to achieve 1,800 then that’s a really good policy,” Ms Harvey said.

“That’s a really good show of faith in Western Australia and also recognition that our economy is expected to have continued growth over the next few years.