Lunch on Landry for ATCO staff 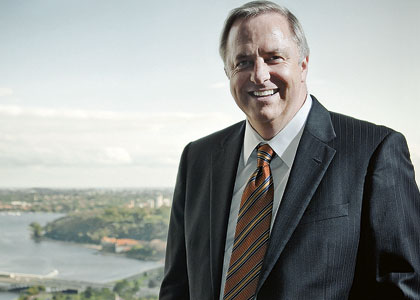 HUNGRY FOR KNOWLEDGE: Steven Landry looks forward to a long lunch on March 20 to get a better understanding of his staff’s views on multiculturalism, among other issues. Photo: Grant Currall

And while a business executive’s luncheon habits are not usually the fare of newspaper interviews, Mr Landry is happy to talk about his gastronomical indulgences, particularly as they relate to his role as an ambassador for A Taste of Harmony.

Started by property developer and former Elders executive Peter Scanlon, A Taste of Harmony aims to promote discussions about culture and multicultural understanding to bring about social cohesion in the workplace and beyond.

To take part, an organisation registers with A Taste of Harmony and sets a lunch date for the office on any day between March 19 and 25, when employees and employers alike bring in a home-cooked meal that represents their cultural heritage (or something they love to cook) to share with their colleagues.

In ATCO’s head office in the middle of the Perth CBD, employees are setting the menu for the day, and Mr Landry says the 48 staff at the energy services and power generation business are looking forward to the event.

Mr Landry, who grew up in Nova Scotia, Canada, and has worked in the US, Europe and now Australia, has firm beliefs about multiculturalism and diversity and how they tie into business.

In his time at the top of Chrysler Corporation’s US operations he noted how employee-based diversity quotas and targets for different racial groupings could be contrived.

“When I worked in Detroit, Michigan, diversity is mandated and I always felt mandatory multicultural diversity in the workplace had a strange and unfair feel to it,” Mr Landry said.

He said quotas weren’t necessarily a bad measure, however, and in the Chrysler case concerned a social environment with different subsets of people.

Ultimately, it allowed the business to ensure everybody in a multicultural, diverse market had an opportunity to work for a good company.

“It felt odd, but the output was very strong and good for employment in general,” Mr Landry said.

ATCO doesn’t have the same requirements within its Australian operations.

“Here we have made no effort to steer multiculturalism and diversity and it happened naturally,” he said.

“I don’t think I have worked in an office that is as diverse as this.

“Even in my days in Brussels, it was mostly Canadians, Americans and people from Brussels and Belgium, maybe the Netherlands. That was with 250 people, but with 48 people on this floor we have people from Australia, the UK, Ireland, New Zealand, South Africa, Singapore and Canada.

“From a percentage standpoint this is the most diverse office I’ve ever been in.”

With the increasingly global nature of businesses, the importance of cross-cultural understanding has become more and more important to multinational businesses such as ATCO.

The Australian subsidiary uses its Canadian parent company as a feeding system for training staff at new operations, such as its three Australian power stations, which were initially run by Canadian expatriates.

Such systems show the need for cross-cultural understanding, even between two countries with largely comparable business policies and systems such as Canada and Australia.

For Mr Landry, though, the harmony lunch doesn’t require a business case.

“It is a fun opportunity to have an exchange on multiculturalism; when we go to the ‘eat space’ and have our lunch on the 20th, it won’t be for an hour, it will probably be for two and a half or three hours and I think that is great,” he said.

“Hopefully it will grow into something we do not just once a year when A Taste of Harmony is on, but more regularly so that people get a chance to understand each other’s cultural background.”