SPECIAL REPORT: Having faced intense competition for much of the past decade, an innovative manufacturing plant backed by timber industry veteran Denis Cullity is starting to deliver good returns. 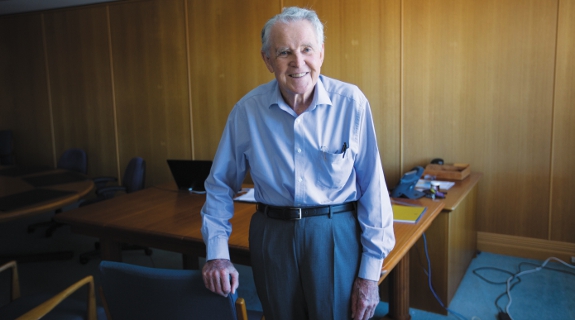 BOUNCE BACK: Denis Cullity says the GFC was a setback for Wesbeam, but the business hit back to achieve sales of $82 million for the year to June 2015. Photo: Attila Csaszar

Having faced intense competition for much of the past decade, an innovative manufacturing plant backed by timber industry veteran Denis Cullity is starting to deliver good returns.

At a time when policymakers are crying out for economic diversification in Western Australia, one person to have contributed more than most is Denis Cullity.

Mr Cullity led the development of five manufacturing facilities in the WA timber industry over a period of 50 years (see table).

Now aged 87, Mr Cullity has retired from board roles but is still the major shareholder and maintains a keen interest in his latest venture, Wesbeam’s $115 million laminated veneer lumber (LVL) plant at Neerabup, north of Perth.

Wesbeam posted a net profit of $9.6 million in the year to June 2015 after lifting sales to $82 million.

That was by far its best result in 10 years of operation, and compared with a loss of $8.1 million on sales of $68 million in the prior year.

Chairman Michael Wright, who succeeded Mr Cullity in 2013, said the business was likely to deliver even better results in the current financial year.

“I’m confident sales will be in excess of last year’s total,” he said.

A much bigger challenge was the washback from the GFC, with the collapse in the US housing market and the surge in the value of the Australian dollar encouraging LVL manufacturers in the US to chase sales in Australia.

“That killed our exports and gave importers an enormous boost,” Mr Wright said.

The recent decline in the Australian dollar, and the pick-up in Australian and US housing starts have left Wesbeam better placed than at any time in its history.

Wesbeam processes about 160,000 cubic metres of timber per year (TBC), with its main feedstock being pine from the plantations around Perth.

The pine is peeled into thin strips, which are glued together in longitudinal layers of veneer to create a strong lumber product.

“It’s an ideal material for what we want; the young karri is softer and easier to peel than mature karri and has a superior strength to pine,” he said.

“We’re able to turn out a super-strong LVL product.”

Wesbeam’s LVL is used in a range of structural applications, including roof beams, rafters, battens, and scaffold planks.

“The beauty of LVL is that we can supply in long lengths, with the longest to date being 13.2 metres, while blending pine and karri affords us flexibility,” Mr Cullity said.

“It gives us the capacity to engineer the product to suit the needs of each customer.”

The opening of the Wesbeam factory was the latest in a string of innovations pursued by Mr Cullity, going right back to the 1940s when he spent two years at the CSIRO in Melbourne.

“I made the first sheet of particleboard in Australia on an experimental press set up in the CSIRO lab,” Mr Cullity recalled.

Commercial production of particleboard commenced in the late 1950s, after Mr Cullity attended a conference in Europe.

“I saw some pretty primitive plants, I thought to myself ‘if they can do that, so can I’,” he said.

On his return to Perth, Mr Cullity built his first commercial-scale plant in Victoria Park, and over the years built progressively larger factories.

“We built four particleboard factories, each one four times larger than the one before,” he said.

Another early initiative was buying a veneer slicer in the US in the late 1950s.

“I remember supplying some beautiful blackbutt panels for the premier, Sir David Brand’s office, in what is now the Como Hotel.

“Essentially we were innovators.”

Other projects led by Mr Cullity, through his former company Wesfi, included construction of the state’s major pine sawmill at Dardanup, and a medium density fibreboard plant at Welshpool.

Outside the timber industry, Mr Cullity’s many other ventures included chairing Swan Television.

He led the company’s application for the Channel 9 licence in Perth in 1962 and chaired the company for the next 22 years.

Mr Cullity chaired Swan until 1984, when entrepreneur Alan Bond, riding high from his America’s Cup victory, made an offer that was too good to refuse.

“What we thought was worth $25 million turned out to be worth $50 million; it was a very good exit,” Mr Cullity said.

Mr Cullity followed his father into the timber industry, after Tom Cullity established timber merchant and importer Cullity Timbers in 1928.

But Mr Cullity has no desire to build a family dynasty.

“Definitely, let the children find their own path,” he said.

“I’ve seen families virtually destroyed by parents forcing their children to follow the same vocation as themselves.

“You’ve got to let people make their own choice. 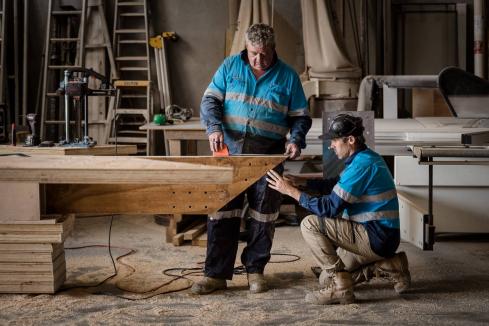