Fortescue Metals Group reduced cash production costs around 45 per cent in the 12 months to the December quarter and has plans to further buy back debt in the months ahead, chief executive Nev Power said today. 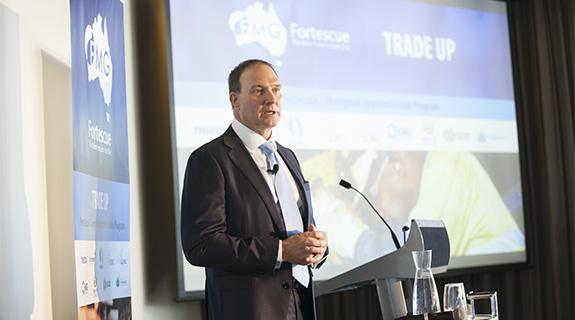 Fortescue Metals Group reduced cash production costs around 45 per cent in the 12 months to the December quarter and has plans to further buy back debt in the months ahead, chief executive Nev Power said today.

The company reached C1 cash costs of $15.80 per wet metric tonne of iron ore in the December quarter, six months ahead of its original schedule, and a reduction of 7 per cent on September levels.

With falling oil prices and a strategy in place to put further pressure on expenditure, the company intends to further cut costs for the remainder of the financial year.

A further benefit was a reduction in strip ratios expected for the next five years.

“With lower strip ratios now expected for the next five years that assists in providing further momentum for sustainable cost reductions being delivered as we go forward,” Mr Pearce said.

Outside operating expenditure, the company also reduced capital spending from around $330 million to about $200 million.

It is additionally proceeding with plans to buy a series of very large ore carriers, with financing details to be sorted out in the next six months.

Those carriers would further reduce cash costs for the company through economies of scale.

Production for the quarter was 42.1 million tonnes, in line with guidance of 165mt for the financial year.

There was some bad news, however, with Fortescue flagging it would review the $32 million carrying value of the Nullagine Joint Venture with BC Iron.

Production at that operation has been temporarily suspended.

Mr Power said the company would be looking to further reduce debt, with more than $2 billion cash in hand and more than $1.1 billion repurchased so far.

That had created a pre-tax saving of about $190 million.

“The US high yield market, and for that matter all of the US debt markets have been heavily oversold, predominantly on the back of the oil price,” Mr Power said.

“Our debt has been priced down with the downdraft in that oil market.

“So it is a major opportunity for us to use that to buyback our debt.

“If the markets will price our debt at those low levels then it’s a great opportunity for us to buy it back ahead of time.”