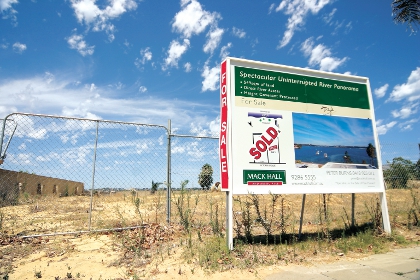 Perth’s residential land market is emerging from a substantial and extended downturn, with lot production expected to peak at more than 13,000 lots in 2014-2015, new research says.

BIS Shrapnel’s latest report of its Outlook for Residential Land, released this morning, predicted lot production in the Perth and Mandurah area to rise to 13,600 by 2015, around the same level as the 2005-06 peak.

“The combination of lower land prices, income growth and lower interest rates has meant that the purchase of new houses has improved to its most affordable level since the early part of the mid-decade boom.”

Nationally, demand for residential land is likely to be mixed over the next year, according to the report.

BIS Shrapnel said "green shoots" had emerged in the demand for residential land in Sydney, south-east Queensland and Perth, with more positive signs to continue through 2012/13.

But housing lot production in Melbourne and Adelaide was expected to remain in the doldrums.

But demand for land in Melbourne and Adelaide was expected to remain subdued despite lower interest rates.

BIS Shrapnel said Melbourne and Adelaide had experienced a strong residential rebound after the global financial crisis, with the consequent high level of housing lot production and solid growth in land prices resulting in little pressure on the demand for new homes and land.

However, the emerging upturn in Sydney, south-east Queensland and Perth would be slow to gain momentum, BIS Shrapnel.

"Concerns about the outlook for the local and world economy, as well as employment prospects, are expected to make potential new house buyers hesitant, with only modest growth in lot production and minimal rises in land prices expected in 2012/13," the forecaster said.

"With the likelihood of continued low interest rates through 2012/13, and evidence that the residential markets are showing growth, a stronger rise in the demand for new houses and land is expected over 2013/14."

Lot production in Melbourne and Adelaide was likely to continue to fall, with the possibility of a further decline in prices, and/or increases in buyer incentives also occurring.