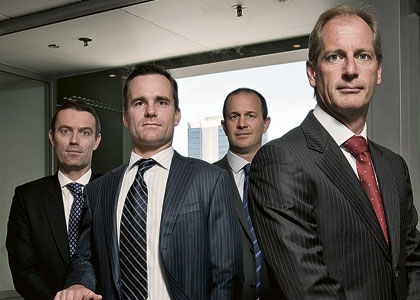 Geoff Simpson’s new colleagues in London should be impressed.

Two years ago, he and a group of former Clayton Utz partners established the Australian operations of prominent London law firm Allen & Overy.

And just over a year ago, his long-standing client, Equinox Minerals, launched the first in a string of takeover deals that made Allen & Overy one of the busiest law firms in town.

The Equinox deals accounted for $19 billion of that total, which was enough to make Allen & Overy the number one M&A law firm in WA Business News’ corporate finance league table.

It’s a dream start for Allen & Overy, which was at the vanguard of a trend that has seen nearly a dozen international or interstate law firms move into the Western Australian market over the past two years.

Those firms see Australia in general, and WA in particular, as a growth region.

However, that trend has, for the most part, had little impact on the WA legal market – so far.

It was followed by Clayton Utz, which advised on 20 M&A transactions worth $10.4 billion and seven ECM deals.

Blake Dawson continued to be one of the major players, advising on 16 M&A deals and 11 ECM transactions.

However, when it comes to being prolific, all of these firms were outpaced by Steinepreis Paganin, which has built a niche practice focused on corporate finance transactions.

The city-based firm advised on 62 capital raisings and 13 M&A deals last year, making it a good proxy for the level of activity among Perth stockbrokers and small to mid-cap WA companies. Its major transactions last year included advising on the takeovers of Hunnu Coal and Global Industrial Services and advising Hunnu, Rico Resources and TFS Corporation on capital raisings.

In the ECM segment, the number two ranked firm (by number of deals) was Gilbert + Tobin (formerly Blakiston & Crabb), which advised on 13 transactions.

The value of those deals ($513 million) was almost the same as all of the ECM deals handled by Steinepreis Paganin.

While Gilbert + Tobin was one of the many east coast and overseas firms to move into WA, another notable change was the in-market merger of local firms Jackson McDonald and McKenzie Moncrieff.

The merged firm is set to be a more serious player in the corporate finance sector, having worked on nine ECM deals and six M&A transactions last year, mostly at the junior end of the market.

Among the market leaders, the deal flow in 2011 was characterised by a few notable themes.

One was the large amount of work for Africa-focused mining companies that started life in Perth and, in many cases, subsequently listed on overseas exchanges such as the Toronto Stock Exchange (TSX).

Examples include Equinox Minerals, Anvil Mining, Mantra Resources, Sundance Resources, Extract Resources and Bannerman Resources, all of which have been on the receiving end of takeover offers.

Another theme was the large number of acquisitions made by Asian companies, such as Chinese companies Wah Nam International, Hanlong Mining Investment and Minmetals Resources, Thai company Banpu and India’s Lanco Infratech and Yancoal.

Perth law firms are also benefiting from the increased activity in the oil and gas sector, though that has mainly flowed to energy and infrastructure lawyers.

Equinox had grown from a small Perth-based exploration company to a large Africa-focused copper producer, with listings on both the Australian Securities Exchange (ASX) and TSX and most of its management in Toronto.

But key management, including Mr Williams, remained in Perth and turned to Mr Simpson’s firm for M&A advice.

The relationship proved lucrative in 2011, when Equinox completed its $1.25 billion acquisition of Citadel Resource Group, launched a $4.5 billion bid for Lundin Mining, fended off a short-lived takeover proposal from Minmetals Resources and was eventually acquired by Canadian mining giant Barrick Corporation in a deal valued at nearly $7 billion.

Another key client for A&O was Aquarius Platinum, which was also established in Perth but is now Africa-focused; it undertook two acquisitions last year.

Perth’s largest law firm, Freehills, was ranked second in the M&A league table, even though it worked on substantially more transactions (28) than any other firm.

Its clients included international companies making acquisitions in WA and a wide selection of local businesses.

The former group included Minmetals Resources, which not only announced its short-lived takeover proposal for Equinox, but also followed up with a $1.2 billion bid for Anvil Mining.

Hanlong used another law firm, Mallesons, when it launched a $1.65 billion takeover for Sundance Resources, which is still live.

Freehills’ deal list was helped by having several clients, including Catalpa Resources, Bannerman Resources and Territory Resources, that were involved in more than one M&A transaction during the year.

The third-ranked firm, Clayton Utz, also has a broad WA client base, having worked on 20 M&A transactions and seven ECM deals.

Its clients included Extract Resources, Sundance Resources, Anvil Mining and Minara Resources, which were all on the receiving end of takeover offers.

However, one of its most significant transactions was not reflected in the league tables, because no money changed hands.

Led by Perth partner Tim Lester, Allens acted for Japanese company Inpex and France’s Total on a corporate reorganisation and restructuring of the Ichthys LNG project.

Mr Lester said the changes facilitated the recent final investment decision for the $US34 billion project.

Mr Lester said the reorganisation would also support the proposed project financing, which Allens was also working on.

The oil and gas sector also provided a boost for Squire Sanders, the US-based firm that was established in Perth last year by former Minter Ellison partners.

Squire Sanders acted for Kuwait’s Kufpec, which acquired a $2 billion equity interest in the Wheatstone LNG project last year ahead of the final investment decision on the $29 billion development.

That was on top of a handful of deals for local firms, such as L7 Solutions and Kagara, and rocketed Squire Sanders up the league table ranking.