As grim as the iron ore outlook appears for some of WA’s smaller miners, the state government, too, stands to lose out amid the sector’s upheaval. 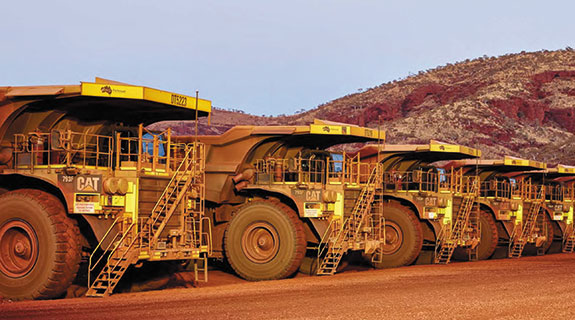 PRESSURE: FMG shares traded in the $3.90 range as recently as last September, but were down more than 50 per cent to a six-year low last week.

As grim as the iron ore outlook appears for some of WA’s smaller miners, the state government, too, stands to lose out amid the sector’s upheaval.

Apart from their billionaire status, Gina Rinehart and Andrew Forrest do not have much in common; though if the current trend in the iron ore industry continues, they could be the only two local survivors of what is becoming a corporate bloodbath.

Most small Australian iron ore mining companies, such as Atlas Iron, BC Iron and Mount Gibson Iron, are under pressure caused by the falling price of their only product. Other producers, such as Pluton, Sherwin, Termite Resources and Western Desert have closed.

Maintaining production has become a daily struggle for the small producers, which do not enjoy the same benefits of the highly efficient railway and port systems available to the internationally controlled mining giants – Rio Tinto and BHP Billiton.

Nor do the small locals enjoy the financial backing of two Chinese-controlled, but financially stressed producers of part-processed magnetite ore – Gindalbie Metals and Sino Iron.

The pressure on the locals, as well as the small but US-controlled Koolyanobbing mine near Southern Cross, was there for everyone to see at an iron ore conference in Perth last week, an event marked by angry comments from both sides of an increasingly unpleasant situation.

Lourenco Goncalves, the US-based chief executive of Cliffs Natural Resources, which owns the Koolyanobbing mine, was the most outspoken. Mr Goncalves claimed excess production by Rio Tinto and BHP Billiton could ruin Australia because too much ore being delivered into a declining Chinese market had slashed the price of the country’s biggest single export.

The local heads of Rio Tinto and BHP Billiton, Andrew Harding and Jimmy Wilson respectively, defended their rates of production by saying that, if their companies did not supply the ore, someone else would; with the inference being that the material could come from Africa or South America.

Much of what happened at last week’s conference was predictable to the point of being orchestrated.

If the price does not rise above its current $US55 a tonne, or if the Australian dollar does not fall sharply, it is possible that the number of mine owners will continue shrinking and for the industry to be divided into two camps – four international operators (Rio Tinto, BHP Billiton, Gindalbie and Sino), and two locals (Mr Forrest and Mrs Rinehart).

The increasing concentration of control of the iron ore industry is bad news for workers (who have lost alternative sources of employment), suppliers (who have fewer potential buyers of their services), and investors exposed to the small end of the industry (who have seen their savings shredded).

From the government’s perspective, what has happened so far in iron ore ought to be alarming, because it means that it will suffer a reduced influence over the industry.

It is possible that soon there will only be two locally based iron ore miners – Mr Forrest through Fortescue Metals Group and Mrs Rinehart through Hancock Prospecting.

Even though both live in Perth, they have very strong views on how they run their business interests; neither welcomes government involvement, and both are astute users of the legal framework under which they operate.

If dealing with Mrs Rinehart and Mr Forrest is a delicate matter for government, it only gets worse when trying to deal with the internationals – either London-based Rio Tinto and BHP Billiton, or Chinese-controlled Gindalbie and Sino.

Treating everyone equally, which is what government generally tries to do, will become increasingly difficult as control of the iron ore industry contracts into fewer hands.

It will become impossible if the price-crushing pressure of excess production by Rio Tinto and BHP Billiton threatens the viability of the last local survivors, and WA iron ore production becomes a business totally controlled by international interests.

The dilemma for the government is that it has failed to find an answer to the core strategy of the big two that, ‘if we don’t produce the ore, someone else will’.

Unless government comes up with an answer, it could soon find itself supervising a dramatically diminished industry dominated by international interests and managed by transient executives who simple see Western Australian iron ore as stepping stone in their corporate careers.

The only local players of substance will be Mrs Rinehart and Mr Forrest, and they’re unlikely to find business conditions any easier as the iron ore flood squeezes their fortunes; but they are likely to play the ‘we live here’ card if forced to ask for government help.

Some losers, one big winner

Lower prices for iron ore, oil and a basket of other commodities, has very much been to China’s advantage, with annual savings on imports estimated to have reached $US250 billion.

Oil has been big kicker for China over the past year with the daily saving said to be around $US600 million – and yes, that is per day because the country imports 12 million barrels of oil every day,

Chinese iron ore imports have been rising, but not as fast as production, with the net result being an annual saving for Chinese steel mills of around $US30 billion, with much of that money once destined for WA’s mining industry.

Cheaper iron ore for China could re-ignite a problem for the rest of the world, which will eventually find its way back to Australia – a flood of cheap Chinese steel hitting world markets.

First signs of anger have already been detected in Europe and the US, where the steel industries have been whacked by a wave of Chinese exports reported to have risen to 9.2 million tonnes in January alone, an increase of more than 60 per cent on the same month last year.

Adding to the problem in the US is that country’s strong currency, which is crimping its ability to export but making imports cheaper, with the net result being a wave of job losses at US steel mills and a call for the reintroduction of tariffs on Chinese steel.