A Perth-based fintech startup has been named one of the top finalists in Silicon Valley Forum’s World Cup Tech Challenge, while the winners of a hackathon hosted by BHP Billiton and Unearthed have been revealed. 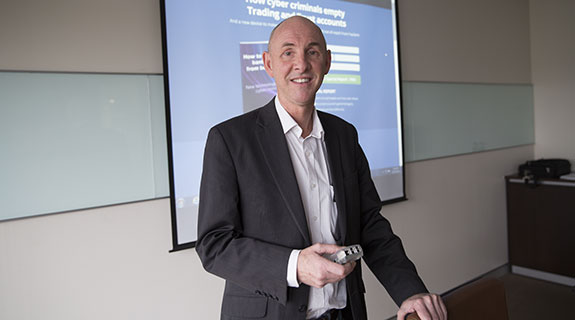 A Perth-based fintech startup has been named one of the top finalists in Silicon Valley Forum’s World Cup Tech Challenge, while the winners of a hackathon hosted by BHP Billiton and Unearthed have also been revealed.

Local entrepreneur Graeme Speak’s BankVault technology has been selected in the top 24 startups worldwide for the Wold Cup Tech Challenge.

BankVaultonline.com prevents bank accounts from being hacked, and involves placing a physical computing device in an office which communicates with a counterpart service running in a remote data centre.

The system is immune to malware and other techniques used by hackers because it runs separately to the user’s own network.

BankVault is one of just four fintech companies chosen to compete in the challenge.

Mr Speak said he was pitching BankVault at the intersection of the fintech and cyber tech sectors, which he described as two of the hottest areas of startup investment in the US.

Minehack, the first joint open innovation hackathon between Unearthed and BHP, took place over the weekend at the mining giant’s Perth office.

ThreeSixty was awarded second place for its system to eliminate heavy collisions at mine sites, while Operation Clear Skies took the young innovator award for its 10-day dust prediction tool, which uses weather data to forecast dust concentrations.

The recognition of local tech entrepreneurs follows news over the weekend that the state government had appointed Finance Minister Bill Marmion as Western Australia’s new minister for innovation, with the state’s tech sector to also receive $20 million in funding.

Innovate Australia chief executive Peter Kasprzak said the appointment of Mr Marmion would drive a wide range of innovation initiatives, starting with the convening of an innovation summit and opening a web portal.

“As a not-for-profit innovation advocacy organisation, Innovate Australia has been campaigning for more focus on innovation projects in WA for the past few years,” he said.

“We are keen to help the minister to build an innovation strategy to encourage new enterprises and increase research and development conducted by existing businesses and foster job creation.”