Gold is a rare bright light in the mining industry, with major changes during the past two years to be followed by the opening of multiple new mines and more M&A deals. Click through to find the special report, which ranks WA producers, and looks at Gold Corp, executive pay, and new gold projects. 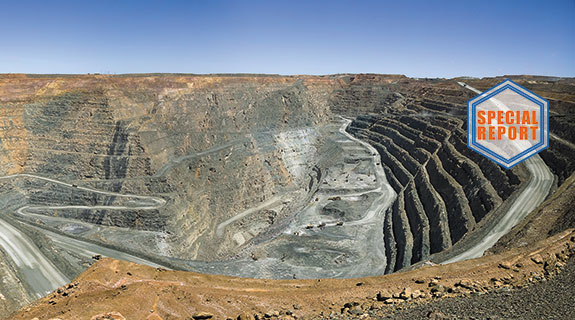 Gold is a rare bright light in the mining industry, with major changes during the past two years to be followed by the opening of multiple new mines and more M&A deals.

Click through to find the special report, which also looks at Gold Corp, executive pay, and new gold projects.

If there is a single statistic that conveys the scale of change in the gold sector it is this: 23 per cent of Australia’s annual gold production has changed ownership since April 2013.

It’s a period during which Australian companies such as Northern Star Resources, Evolution Mining, and Metals X have gained ownership of more mines, as some of the big international players have scaled back.

The strength of the $A gold price, courtesy of the falling local currency, has played a big part in determining the sector’s fortunes.

While the international price has slumped below $US1,100 per ounce, local producers are getting more than $A1,500/oz.

The sector’s changing profile is highlighted by the latest BNiQ online database ranking of gold producers, based on their output in Western Australia

The BNiQ ranking, prepared by Business News, also shows it is overly simplistic to suggest all of the big international players are retreating.

US-based Newmont remains the largest producer in WA, despite the sale of its Jundee operation last year.

Locally, Newmont produced just more than 1 million ounces per year, courtesy of its Boddington mine and 50 per cent stake in Kalgoorlie’s Super Pit.

South Africa’s Gold Fields has expanded to be the state’s second-largest miner, helped by its acquisition of Barrick Gold’s Yilgarn South operation.

It also produced just more than 1 million ounces per year.

Melbourne-based Newcrest Mining is the state’s fifth-largest gold miner, with its Telfer mine in the Pilbara continuing to produce about 520,000oz.

However, Newcrest’s profile in WA could change following its appointment of Merrill Lynch “to assist in assessing alternative ownership options” for the Telfer mine.

The biggest change over the past two years has been the shrinking Australian (and WA) profile of Canada’s Barrick Mines.

It has gone from being WA’s second-largest gold miner, behind only Newmont, to the sixth largest.

And several new gold miners have emerged during the past two years.

Hanking is the most recent of these, with the first gold pour at its Southern Cross operation occurring in February. The Chinese company is aiming to produce 100,000oz in the 2015 calendar year.

Metals X, by contrast, has gone from being a tin miner and aspiring nickel producer to one of the state’s substantial gold producers after buying Alacer Gold’s WA assets at the bottom of the market in 2013. 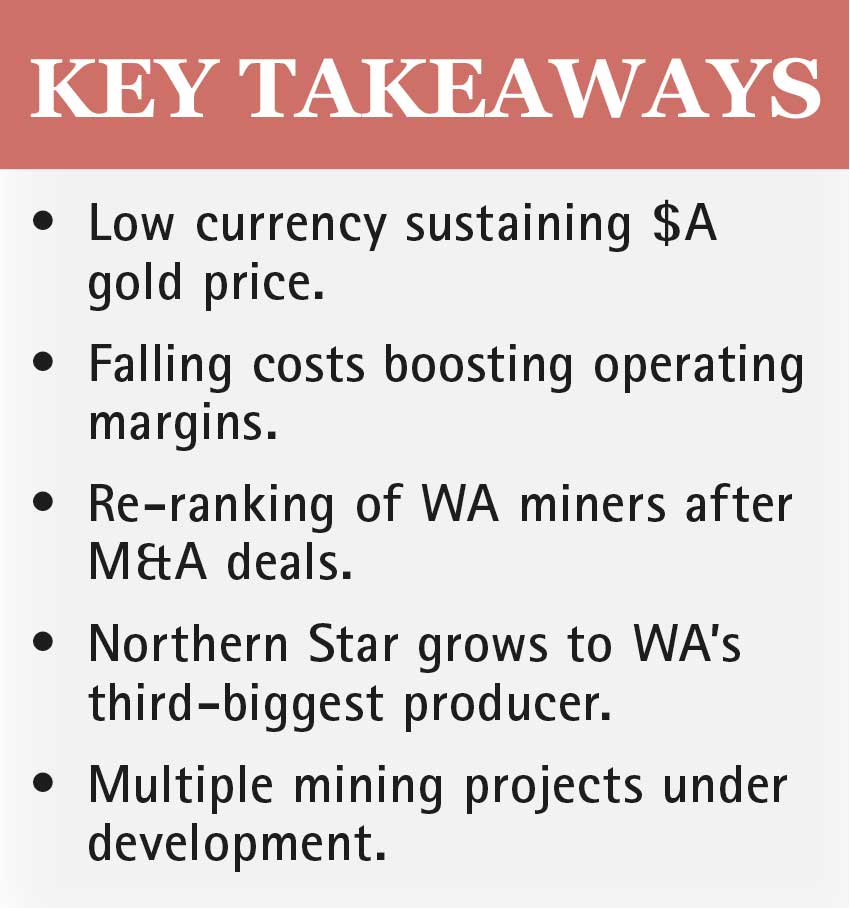 The ranking of WA gold producers is set for more big changes over the next two years, as a result of recent M&A deals and new mine developments.

Evolution has been the biggest name on the takeover front this year, having bought La Mancha’s Australian operations in WA and Barrick’s Cowal mine in NSW.

Nationally, Evolution will roughly double its output to around 810,000oz; its WA assets will account for about 30 per cent of the total.

Metals X has also been active on the M&A front, acquiring two small WA projects at the end of last month.

They will feed into its existing growth plans, notably the Central Murchison project, which involves the reopening and development of multiple old mine sites.

Adding that to its established mines, Metals X is aiming to lift annual production to about 500,000oz.

Saracen Mineral Holdings also has bold growth plans, with annual output expected to nearly double to 300,000oz on the back of its Thunderbox mine.

Similarly, Doray Minerals is aiming to lift annual production towards 160,000oz following completion of its Deflector mine.

Ramelius Resources is also expanding, albeit on a smaller scale. 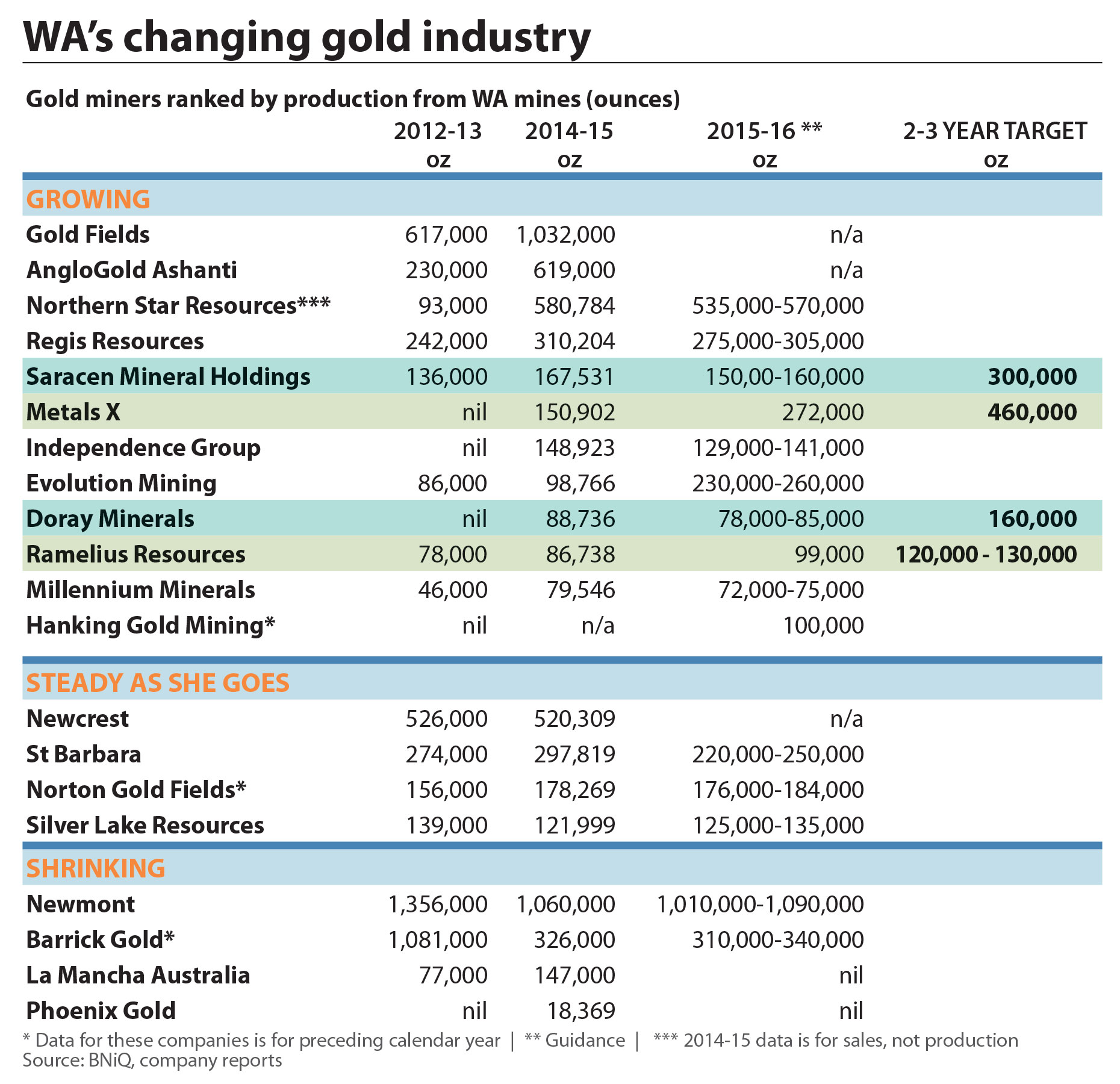 Evolution’s Jake Klein describes this as a pivotal time for the gold industry.

“Asset values are 60-70 per cent below their peak in 2011 and sentiment, which is set on the basis of the prevailing US dollar gold price, is poor,” he said.

This negative outlook for gold equities has occurred at the same time as many of the largest gold companies in the world find themselves over-geared and needing to restructure.

“At the same time, junior gold companies are also finding themselves in the capital wilderness with limited or no access to capital,” Mr Klein said.

He said amid this gloom, there was a bright spot – Australian gold producers.

“The reality for Evolution is that we make money in Australian dollars,” Mr Klein said.

“Our profitability is much stronger.

“This is a time of opportunity if you are strong enough and bold enough to pursue them (opportunities).”

The macro trends benefiting Australian producers such as Evolution have also assisted the international firms.

Newmont, for instance, said in its June quarter report that costs at its Boddington and Tanami mines would be lower than previously estimated.

It said this was primarily due to lower oil prices and $A exchange rates, as well as efficiency improvements. 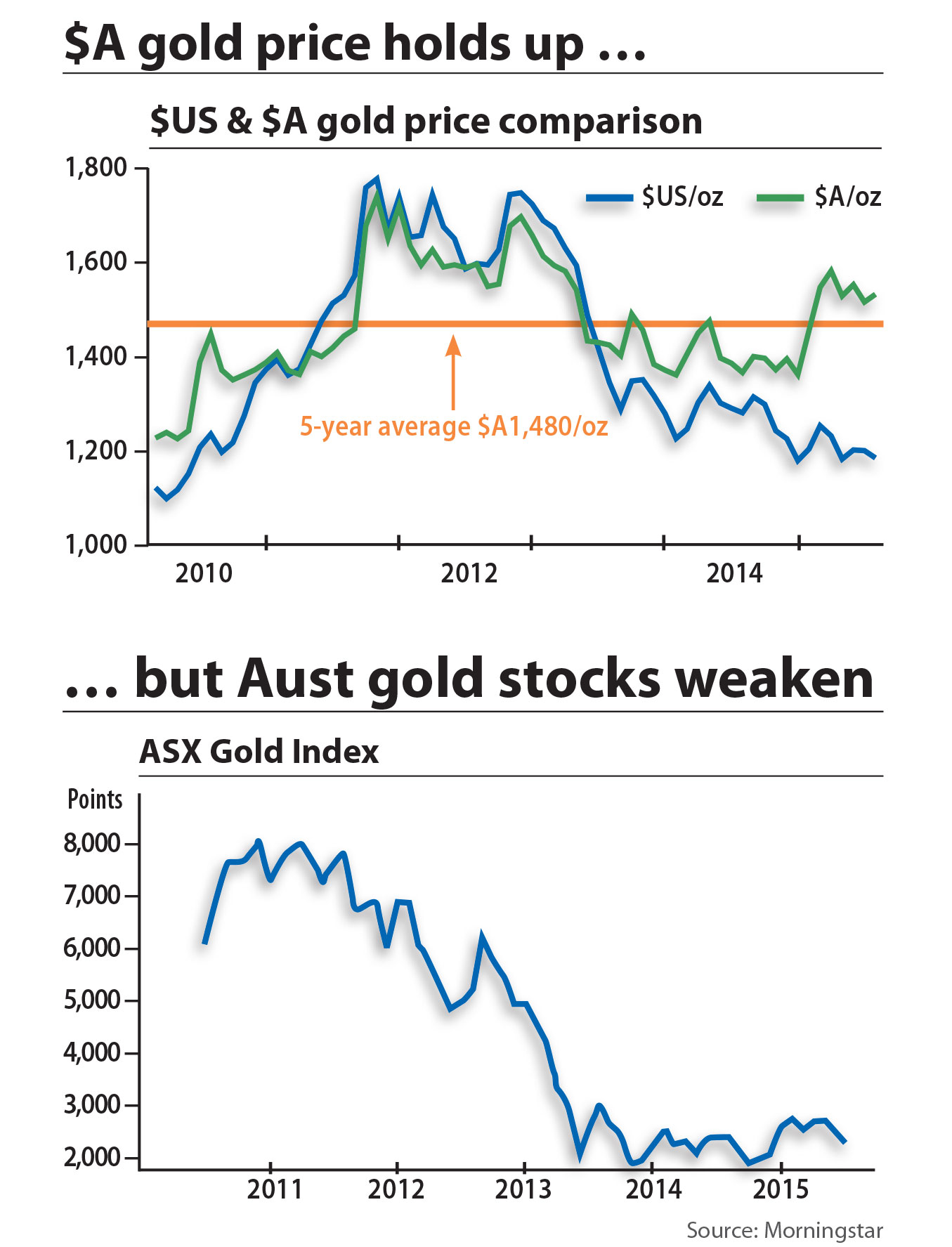 The ability of gold miners to appeal to investors was a notable theme in presentations at this year’s Diggers & Dealers conference.

Northern Star managing director Bill Beament was a prime example, opening his address by describing Northern Star as “a business first and a mining company second”.

He said the company had delivered a return on equity of 34 per cent in 2014, well above some blue chip stocks such as Woolworths and Commonwealth Bank.

For most gold miners, increased scale is a key aspect of their investor pitch.

Saracen, for instance, aspires to join the ranks of Australia’s mid-tier gold miners such as Evolution, Northern Star and Regis Resources.

When Northern Star completed the acquisition of Jundee last year, it said it would become the second-largest ASX-listed gold producer, behind Newcrest.

Northern Star won’t hold that title for long – it is due to be overtaken by Evolution, following the La Mancha and Cowal acquisitions.

Evolution is aiming higher; its goal is to build the scale and portfolio quality sought by global investors.

Northern Star’s latest investor pitch didn’t talk much about the company’s size, focusing instead on other attributes such as its strong balance sheet, consistent dividend payments, low operating costs, and the ability to deliver growth.

On the last of these fronts, Mr Beament has extolled the benefits of the company’s exploration program.

“These figures more than justify our decision to invest $50 million in exploration over the past year,” Mr Beament said.

“They also underpin our commitment to spend another $35 million on exploration this financial year.

“We have always said that the major gold systems at each of our projects would be shown to host significantly more gold. These results prove that to be the case.”

The company said the additional resources had come at a cost of just $19/oz.

“The simple fact is we would never be able to acquire resources or reserves at anywhere near that price,” Mr Beament said.

That included diversifying beyond tin and nickel projects into the gold sector, where it is rapidly becoming a major producer.

“Your share price is the only true measure of your performance,” Mr Cook said.

He said capital appreciation was no longer the panacea of resources investment.

Metals X has committed to paying 30 per cent of net profit as dividends.

Mr Cook observed that “investors get bored easily”, which meant companies had to deliver growth and excitement.

Metals X is looking to deliver, with two gold projects in production, two more set to commence in the coming year, and a fifth project that could start in 2018. 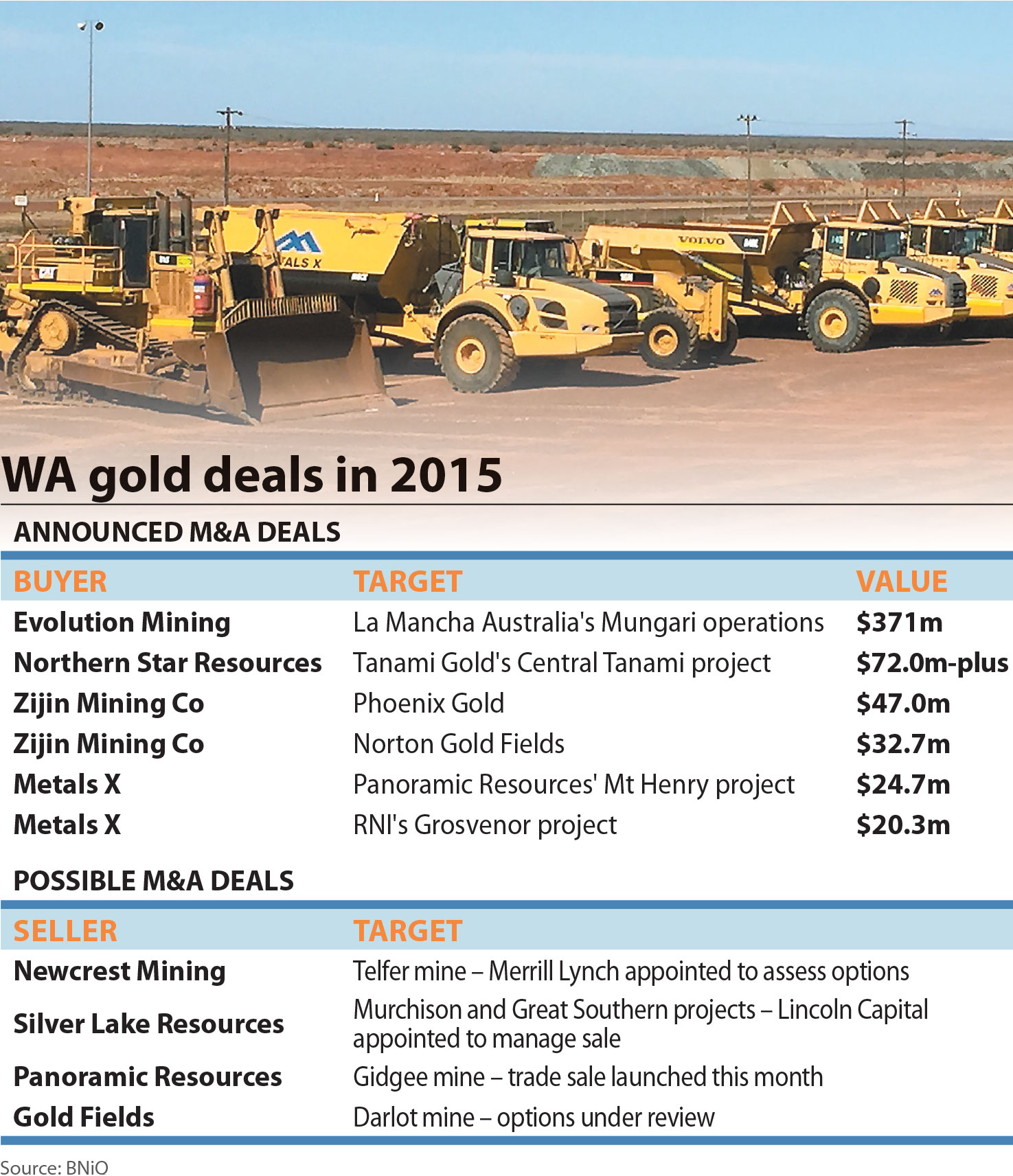 The heightened interest in gold has manifested in two contested takeovers.

Northern Star and Metals X competed to partner with Tanami Gold on its Central Tanami project.

Northern Star won backing from Central Tanami and is starting work on a project that Mr Beament said could deliver annual production of 150,000oz.

But lurking in the background is the threat of legal action from jilted suitor Metals X.

Both companies believe Phoenix’s assets could add value to their own operations.

Zijin, which recently moved to full ownership of Norton Gold Fields, announced in June its intention to lodge a takeover at 10 cents per share.

Evolution has responded by buying Phoenix stock on market at 12 cents a share to lift its stake to 19.8 per cent.

Phoenix shareholders will be winners as this plays out.