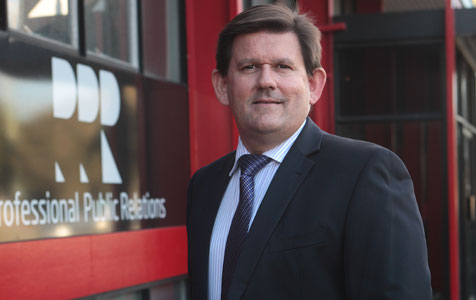 LEADER: The name Peter Harris has become synonymous with public relations in Perth after 15 years at the biggest firm in the state, PPR

WA experience has kept Perth's top PR firms on top of their game and prevented global companies from getting much of a look in.

Western Australians are a parochial lot – in sport, politics and, not surprisingly, business – and nowhere is it more apparent than in the state's public relations industry, where relationships are its lifeblood and the local stalwarts reign supreme.

For more than a decade the PR field has been dominated by a handful of familiar names.

While a few founders have dropped away and a couple of new firms established, those who have been around the longest remain at the top of the heap.

Names such as Peter Harris, Anthony Hasluck, Marie Mills, Warrick Hazeldine, Des Riley, Paul Downie and Estelle Buzzard may be off the radar for many Western Australians, but the value they bring to the business community puts their services in high demand at the big end of town.

They're the ones behind the scenes whose role it is to lift a business's profile out in the broader community, to manage how the media portrays a potential 'crisis', to ensure employees remain loyal to their employer, or drum up investor interest.

Since the GFC, WA's buoyant economy has been kind to the PR industry, which relies to a large extent on a plentiful supply of cash flowing through the system to grow its influence.

In the past 12 months, most firms have grown as digital media opens new doors – but the reliance on long-standing relationships remains.

In 1998, the firm's current executive director, Peter Harris, joined the team as its third employee – making him one of the longest-serving public relations professionals among the cohort that exists today.

Now, with 15 years' experience under his belt, he has a good grasp of what works in the local market.

"While we're in a digital and social media age, clients still want to be able to engage with a human face, and they want best practice advice from someone they have met, come to trust, and who is sitting across the table from them."

These comments come after Mr Harris has spent 10 minutes vigorously drawing on a whiteboard, mapping out PPR's history and business relationship with the global PPR brand.

The short version is the original Assert firm took on the Professional Public Relations name in 2000 as its WA 'representative' arm, without any money changing hands or any share in the local company being surrendered.

Seven years later, Messrs Willoughby and Niardone sold the local company to PPR Australia, which had earlier been bought by global company WPP, leaving Mr Harris as managing director of a WA firm owned by one of the biggest communications companies in the world.

"What that's meant for us is a huge flow of information coming from all over the globe at our fingertips," Mr Harris said.

"Our profession is about the individual, but it's also about the brand. I'm not going to shy away from the fact that PPR is very successful because of our brand.

"[As a result] we've got some very, very strong brands placing their trust in us to bring them the best result."

PPR is one of only two examples of a global company having taken complete ownership of a local firm – FTI Consulting being the other.

That company started as Strategic Communications when co-founded by former journalists Paul Downie and John McGlue in 2002, and was bought by global firm FTI Consulting in 2008.

While the global ownership has been successful for FTI, the announcement this week of Mr Downie's return to the business is a sign how important experience and long-standing relationships are in the local market.

The firm's global head of communications practice, Edward J Reilly, said the experience injected by the return of Mr Downie would help the company grow throughout Australia and the Asia Pacific region.

"We are tremendously excited to have Paul back on our team; he is one of the preeminent communications counsellors in the market, bringing our client base a wealth of expertise and experience," Mr Reilly said.

Cannings Purple has gone down a slightly different route in partnering with a global brand; it was formed last year when local company Purple Communications – founded by Warrick Hazeldine and Caroline de Mori in 2004 – sold a 49 per cent stake to Sydney-based Cannings, which had already been bought by global firm STW Group.

"You want to be leading the pack, not following it," he said.

"The relationship with STW has been fantastic – their commitment to training and development is second to none."

The relationship has bolstered Cannings Purple's capability across the board, but in the past year Mr Hazeldine has also led a strategy to claim more share of the government relations market, which he said had become attractive as miners in particular faced increasing operating costs.

"As the equity markets soften and companies become a bit more capital-constrained, it's important to be able to deal with the approvals process very efficiently, because time is money."

Adding value to Cannings Purple in that regard is new executive chair Deidre Willmott, formerly head of external relations at Fortescue Metals Group.

Bob Stevens has also come on board, bringing years of expertise gained as an adviser in the Department of Mines and Petroleum.

WA's second largest firm ranked by the number of consultants is Clarity Communications, which has remained staunchly local.

Founder and managing director Anthony Hasluck told Business News he was surprised at the relatively few national and global companies that had sought to target WA following the entrance of large multi-national resources firms.

"I thought there would be far more of the advertising agency model where contracts would be let and there'd be pitches and all the rest of it, but it hasn't really gone down that route as far as I can see – you're still largely governed by relationships, referrals and networking," Mr Hasluck said.

That, he said, was the likely factor discouraging the independent entrance of the big national and global PR firms.

"But I'd be very surprised if that doesn't change over time.

I don't think it's a bad thing because partly what it does is professionalise the industry more because clients get a chance to compare an apple with an apple."

East coast-based firm Rowland is one of the few examples of a firm attempting to enter the WA market, largely without a previously established footprint; it had set up shop for a time in the 1990s but exited.

It made another foray into WA in 2007, with negotiations understood to have been in the works for the acquisition of a local firm, but withdrew when the GFC hit.

In contrast, several smaller local firms have succeeded to varying degrees in breaking into the top end of the sector.

The newest firm in the top 10 is Platform Communications, founded by Kirsty Danby in 2006. The fact a seven-year-old firm is still regarded as the new 'kid on the block' is evidence of how ingrained local history and experience is in the communications scene.

And yet Platform Communications has the most impressive growth of the sector leaders, with the number of consultants almost doubling in the past two years.

Ms Danby said Platform's success was founded on her own relationships forged in the years prior to launching the business while working as a consultant.

She was working in BHP Billiton's internal communications team when she decided to go it alone and establish Platform.

"They were our founding client and we still have a relationship with them today," Ms Danby said.

"Perth really is about proving yourself, and it's not what you know to get an introduction; the introductions come from personal referrals.

"Now I think we've got enough runs on the board to be respected, but you do have to prove yourself."

Platform has taken a narrow focus on the resources sector, with more emphasis on oil and gas as that industry heats up, allowing the firm to establish its own niche without cutting too much into the realm of the larger competitors.

Gemma Tognini is another who had years of local experience and established relationships to help launch her company, gtmedia.

"I literally started out with a mobile phone, a laptop, and a contact book," Ms Tognini said.

"I know for a fact that relationships bring results and I always had the view that if you do a fantastic job and charge a reasonable price you would never be short of work."

As one of the smaller firms in town (nine consultants), gtmedia has been the target of a number of global firms looking to enter the WA market.

"The best and easiest way for them to get a footprint into WA is to buy into an established company, and we've had those approaches ourselves," Ms Tognini said.

"That's flattering, obviously, but not the be all and end all."

LastSay Communications is another to have been a takeover target.

Founder Donna Cole told Business News it was local firms' ability to be "smart, agile, and over deliver on results" that ensured they would remain successful and safe from being overwhelmed by the major players.

Like most industries, the advent of digital media has forced change in a PR world where strategies need to transgress across multiple communication platforms, including social media.

Many firms are taking heed of reduced opportunities in traditional media to diversify into other areas, such as growing demand for internal corporate communications strategies, or in Cannings Purple's case, government relations.

But for PPR, part of the answer has been to create its own channel; when traditional media began cutting back resources in 2011, the firm published its own magazine – The Pick.

"It has been difficult to get a range of our clients coverage [in traditional media], and that's no disrespect to any media outlets, it's just simply what's happening with online and digital and with the size of papers reducing," Mr Harris said.

"So what we're endeavouring to do is talk to the marketplace direct."

The magazine is now distributed to about 500,000 potential investors in three different languages.

PPR has also started an oil and gas-focused magazine – The Rig – as it looks for more income in that market.

It raises the question of what's next for public relations as marketing budgets tighten and the accessibility and allure of traditional forms of media fade.

There's consensus around the importance of digital, and increasing collaboration between service providers that previously may have been segregated – web design working with communications working with advertising agencies.

But as Clarity Communications' Anthony Hasluck said, the definition of a public relations firm was becoming increasingly blurred.

"It's almost like the name 'public relations' has ceased to be of any great value to anyone – it's just a handy catch-all for people who help other people communicate better than they might otherwise have done," he said.

"But if you got all of us in a room and got all of us to describe it, you'd probably find that it's a bunch of different answers."