Local funds cut through with investors 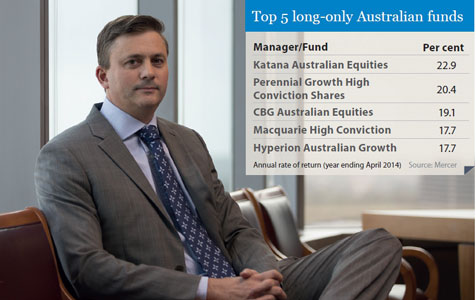 DELIGHTED: Romano Sala Tenna says he is delighted that Mercer has rated one of the company’s funds at the top of the class. Photo: Attila Csaszar

KATANA Asset Management’s Australia-focused investment fund has been recognised as the top performer in its class, beating industry giants including MLC, Macquarie and AMP.

Romano Sala Tenna, who co-founded Katana with fellow Bell Potter dealer Brad Shallard in 2003, said he was delighted with the achievement.

“We knew we were tracking well but we didn’t think we’d had as such a solid year,” Mr Sala Tenna told Business News.

The Katana fund achieved a 22.9 per cent rate of return for the period, putting it ahead of more than 90 other funds across the country.

Mr Sala Tenna attributed the result to a clear investment strategy as well as the appointment in past years of three additional portfolio managers – his brother Giuliano Sala Tenna, Steve Thomas and Matt Ward.

“Over the past year we have held our nerve on some positions and as a team we are getting better and better,” Mr Sala Tenna said.

The new subsidiary will be set up alongside Euroz’s wholly owned Westoz Funds Management, which oversees about $280 million on behalf of two listed investment companies – Westoz Investment Company and Ozgrowth.

Euroz also recently appointed David Curnow, the former head of Citigroup’s institutional sales desk, to the board of its stockbroking arm, Euroz Securities.

Meanwhile, Mr Sala Tenna said he was being realistic about Katana’s achievements in having the fund with the best rate of return.

“It’s a great feat but our goal is to consistently outperform our benchmark and to remain in the top quartile,” he said.

“I don’t think any fund can consistently be number one, even when you have wonderful positions in wonderful companies, it is purely timing and when the market is going to recognise that.”

Automotive Holdings Group, National Australia Bank and Iron Ore Holdings are included as some of the Katana fund’s biggest investments.

Mr Sala Tenna said he remained very positive about the medium term outlook for the sector, and expected investors who had steered clear of the equities market in recent times to soon return.

He said that, with no substantial interest rate rises expected in the next couple of years, investors would look to the equities markets in a bid to receive a higher rate of return than the low rates of interest the banks could offer on a savings account.

“Increasingly people are being forced to take on more risk in their portfolio, we have seen that in the property market already and we have seen part of it in the equity market, but I believe that process has a long way to run out,” Mr Sala Tenna said.