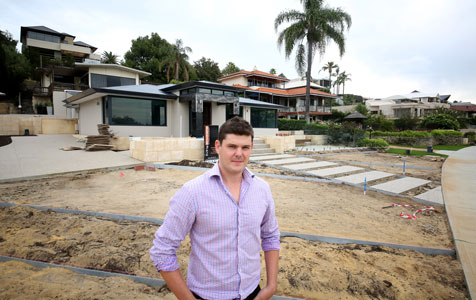 In 2009 Sam Keats was a typical 26-year-old roped in to help a family member undertake a backyard renovation when he stumbled on the idea which formed his now rapidly growing business.

In the four years since, Mr Keats has built Living Environs – a landscape architecture business – into an operation with eight staff and forecast turnover of $2 million for the current financial year.

That annual revenue compares to the $1.2 million posted in the 2011-12 financial year and provides an indication of why the business has just been ranked 32nd in the Startup Smart Top 50 and among BRW’s Top 100 list of fastest-growing companies.

The niche Mr Keats says he identified when asked to help out on his brother’s project was addressing a “dog’s breakfast” of logistical nightmares plaguing the landscaping industry.

“I really just saw how under-serviced and unprofessional everyone was undertaking the work,” Mr Keats said.

“Things weren’t happening in a processed order because it wasn’t all happening under one company.”

His answer was establishing Living Environs as an holistic provider of landscape architecture project management. The company manages projects from start to finish by using its in-house team and a network of sub-contractors.

With no experience in construction, Mr Keats had to establish relationships in the industry with people who could manage and design the jobs as well as finding sub-contractors such as bricklayers, tilers and earth-movers.

He also focused heavily on marketing the company through social media, implementing cloud technology-based working and proving himself as a competent – albeit inexperienced – entrant into the market.

Mr Keats says one of the biggest challenges has been controlling the company’s rapid growth, which he’s done by ensuring enough staff are available and systems and procedures are adhered to.

Living Environs has naturally fallen into the residential market, which Mr Keats anticipated picking up in the next 12 to 18 months as improved housing construction figures flowed through into landscaping.

But the commercial market was also looking more promising, with Living Environs having just completed its first commercial project outside of Perth.

“We’ve just finished a project up in Carnarvon for a private developer and we’re exploring a lot more opportunities out of the Perth metro area and in the north-west.

“We’ve got big ambitions to grow the business larger than what it currently is … everything around the business has been designed around the ability to scale and grow and not really hit a ceiling of growth.”