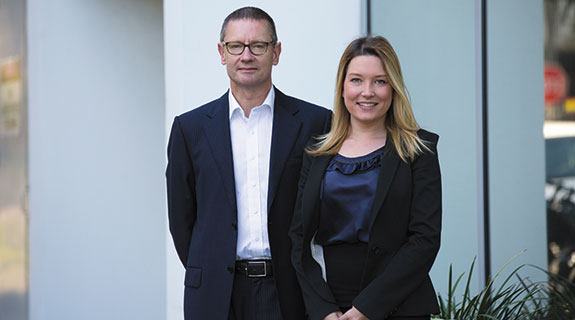 ONE of Perth’s newest, and smallest, law firms is working with some of the world’s biggest companies, capitalising on a niche area in which few other businesses in the Asia Pacific region have expertise.

Sneaking into the top 100 firms in BNiQ by number of legal professionals, HodgkinsonJohnston set up shop in West Perth four months ago as an aviation and climate change-focused law firm, when David Hodgkinson and Rebecca Johnston left Clayton Utz.

Having forged strong working relationships with large national and international aviation clients at Clayton Utz, Mr Hodgkinson and Ms Johnston were pleased they retained the business at their new firm.

One of their most interesting projects with a client, which they declined to name but they claim is one of the world’s leading social media companies, involves HodgkinsonJohnston helping develop plans to use large unmanned aerial vehicles, flying at altitudes between 18 and 23 kilometres, to deliver internet to developing countries.

“We’re probably the only law firm in Australia working on UAV projects of the type that we are,” Ms Johnston told Business News.

Mr Hodgkinson said the project was one of their most exciting, as large UAVs, with wingspans longer than a Boeing 737, operated in a largely unsettled area of law, where regulations were still being developed.

“It’s a well-known client, an interesting area of law, it goes to our core areas of competence and also has a degree of difficulty ... so it’s been an exciting project all round,” he said.

While it is commonplace for lawyers in Perth to leave one firm for another, the unique nature of the work Mr Hodgkinson and Ms Johnston carried out at Clayton Utz meant they were in a good position to open a boutique firm.

Mr Hodgkinson told Business News setting up a new venture had allowed them more freedom to pursue legal aviation work as well as their other professional interests such as: writing and editing aviation and climate change policy content; lecturing at the University of Western Australia and the University of Notre Dame Australia; and attending the upcoming Paris Climate Conference Cop21, as part of their work with non-government organisation EcoCarbon.

Mr Hodgkinson said he believed the split from Clayton Utz went as well as could be expected, describing it as an amicable parting after which both parties continued to make cross referrals.