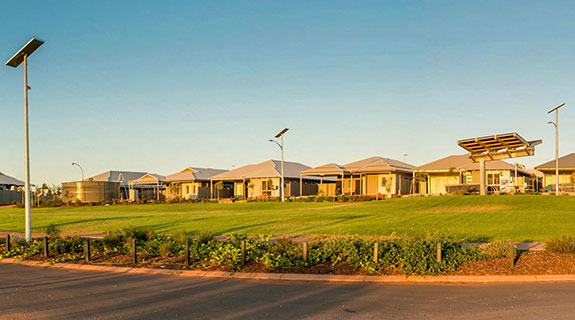 ALL THE ELEMENTS: Elements provided 190 housing lots to buyers who otherwise would not have been able to afford them. Image: Cedar Woods

Cedar Woods won two major awards for its South Hedland development, Elements, which took out the top prize as well as the best affordable development category.

Elements was a collaboration between Cedar Woods, Foundation Housing, IBN Corporation, and Gumala Aboriginal Corporation, which provided 190 housing lots to buyers who otherwise would not have been able to afford them in the Pilbara town.

The development was also a finalist in the residential development under 250 lots category.

“It is a region where most of the notable developments are government led, but Cedar Woods recognised the potential to deliver a lifelong legacy for the community of South Hedland,” Mr Rosser said.

Also at the UDIA awards, Finbar Group notched up its fourth consecutive win in the high-density category, for its Spring View Towers apartments at The Springs Rivervale.

Finbar had previously won the category for its Fairlanes, Pelago West, and St Marks developments.

“Finbar was the first developer to launch into The Springs and we believed that our project actually set the benchmark for what will become a dynamic location,” Mr Chan said.

Joint venture partners Lendlease and LandCorp were also recognised for their The Primary at Coolbellup subdivision, which won the residential development under 250 lots prize.

The 58-lot project comprised the redevelopment of the former Coolbellup Primary School and also included two medium-density sites, while a quarter of the 4.7-hectare site was set aside for public open space.

Lendlease communities general manager Anthony Rowbottam said the project celebrated the role the school played in Coolbellup over many years, while also providing a range of new housing options.

“The development partners worked with the City of Cockburn to deliver a sustainable, safe, connected development that supported an intergenerational community,” he said.

Other winners included: Blackburne Property Group and Pindan Capital, which jointly won the medium-density category for their Monarc Apartments and North One – Subi Centro, respectively; and LandCorp, which was topped the residential development over 250 lots category with its Baynton West estate.

LandCorp was also successful in the sustainable urban development category, for its redevelopment of Perry Lakes.

Peet was the winner of the masterplanned development category, for The Village at Wellard, while LWP Property Group’s The Glades at Byford highlighted the environmental excellence category.