The City of Fremantle is investigating the possibility of developing a light rail network, part of a comprehensive new transport strategy for the port city, at the same time as the state government ponders a policy shift from trams to buses. 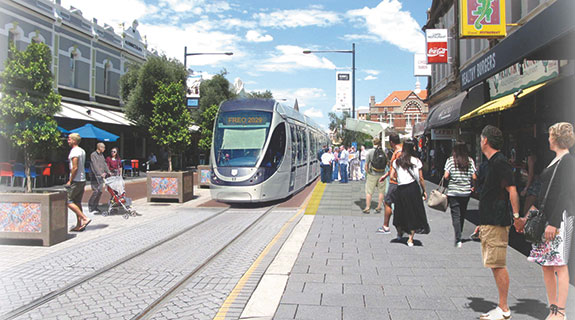 AMBITION: An artist’s impression of what light rail would look like on South Terrace.

The City of Fremantle is investigating the possibility of developing a light rail network, part of a comprehensive new transport strategy for the port city, at the same time as the state government ponders a policy shift from trams to buses.

Priority transport corridors earmarked for light rail include South Street, to provide a rapid transit route to Fiona Stanley Hospital at Murdoch, and the existing freight rail route along Marine Terrace and beyond, to create a link to Port Coogee on the Cockburn coast and Cockburn Central.

The tramlines are an integral part of the council’s new integrated transport strategy, a conceptual plan initially floated in October last year but only officially adopted late last month.

Rapid transit buses are already being planned between Fremantle train station and Port Coogee, but are considered to only be a short-term solution to the lack of public transport options along the Cockburn coast.

“This is a long-term goal but we are embedding the light rail network into our land-use planning now so that when state government funding is forthcoming it can be built more easily,” Fremantle Mayor Brad Pettitt said.

The move coincides with statements last week by Transport Minister Dean Nalder that the state government’s $2.5 billion Max Light Rail plan would likely be put on the backburner for the next 15 to 20 years, at a minimum.

That plan comprised the construction of light rail routes from the CBD to Mirrabooka, Nedlands and Curtin University.

Fremantle’s new transport strategy also has a strong emphasis on upgrading freight links to improve access to the port.

The strategy has prioritised a new bridge to be built as soon as possible to replace the old Fremantle traffic bridge, to cater for both road and rail freight.

While Mr Pettitt said freight links were one of the key challenges facing the city, he was not convinced the federal government-backed Perth Freight Link, including the contentious Roe 8 highway extension, would provide a solution to traffic congestion around the port.

“While we are pleased that the latest project design potentially has reduced impacts on the local Fremantle community, the Fremantle council is nevertheless concerned that the current proposed freight link fails to resolve the areas of greatest congestion between Tydeman Road and Canning Highway,” Mr Pettitt said.

“In fact, it is likely to merely push congestion several hundred metres north towards Canning Highway.

“The Fremantle council is supportive of a working port remaining in Fremantle but this needs to be backed up by a strategic long-term infrastructure investment plan.

“The freight link project in its current form is an extravagantly expensive project that doesn’t even reach the port or guarantee its long-term future in Fremantle.”