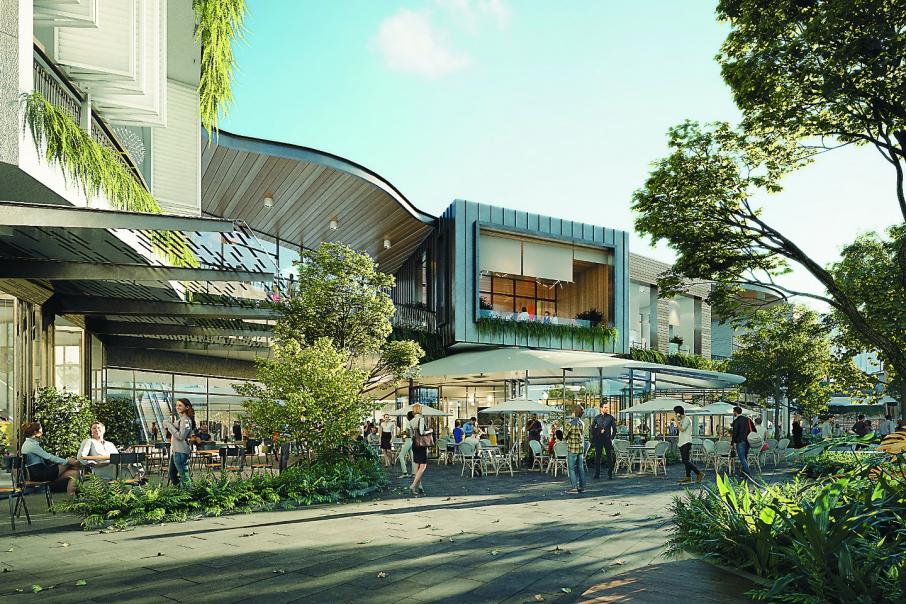 Artist's impression of the $750 million redevelopment of Garden City.

Western Australia’s soft economy and slowing population growth have not discouraged shopping precinct owners from moving forward with multimillion-dollar plans to develop their retail destinations beyond a mere shopping experience.

Analysis undertaken by Y Research revealed that WA had more than a dozen retail property developments in the pipeline, collectively representing nearly $5 billion worth of investment.

At the top end are upgrades to Perth’s major complexes, such as the $750 million redevelopment of Garden City Booragoon. Activity at the smaller end of the scale includes new $50 million builds of mid-tier suburban shopping centres, such as Lakelands Shopping Centre near Mandurah, and as a $5 million face-lift for the 45-year-old Melville Plaza.

Urbis regional director Ray Haeren worked on the planning for some of the state’s largest projects, including Scentre Group’s Westfield centres, as well as mid-tier assets.

He said the removal of legislation caps in 2011, which had placed restrictions on the size of retail centres – delivering WA one of the lowest shares of floor space on a per capita basis in the country – had played a significant role in prompting the state’s surge in retail developments.

“What we’re now seeing with its removal is a new wave coming in line with what are the current trends in terms of international best practice,” Mr Haeren told Business News.

“Just having shops doesn’t cut it any more; it’s all about creating an experience.”

This year, more than 59,000 square metres of retail space will be built across the state’s suburban shopping centres, with that figure increasing to over 108,000sqm for planned builds in 2018, according to Colliers International.

This substantial increase in available retail space is running counter to other factors affecting the state’s economic wellbeing, however, with Perth’s population growth slowing to 0.97 per cent last year and WA’s retail spend per capita also declining.

However, Savills retail director Chris Ireland said retail trade in WA had grown on average 2.1 per cent annually (compound growth rates May 2012 – May 2017) on a five-year basis.

He said this had enhanced the need for landlords looking to upgrade centres and reconfigure retail offerings to position themselves in order to benefit from any further upswing in demand.

Property Council of Australia WA executive director Lino Iacomella said retailers were looking to create a tailored experience and a sense of community that could transcend online and offline.

“The expansion of these shopping centres provides an opportunity for Perth retailers to embrace new and emerging trends and technologies that will overhaul the retail experience,” Mr Iacomella told Business News.

“It’s this sense of connectivity and vibrancy that will see the new generation of bricks-and-mortar retail flourish, as retail centres cement their place within the social fabric of the community.”

AMP Capital has big plans for WA with a $1.4 billion spend at its Garden City and Karrinyup Shopping Centre assets, due for completion in 2019 and 2020, respectively.

“That doesn’t mean we can be complacent,” Mr Kirkland told Business News.

“We know there’s a lot of competition, so what we focus on is making sure we resonate really well with our customers.

“It’s all about product; we’ve got to get the best mix of retailers on the ground.” 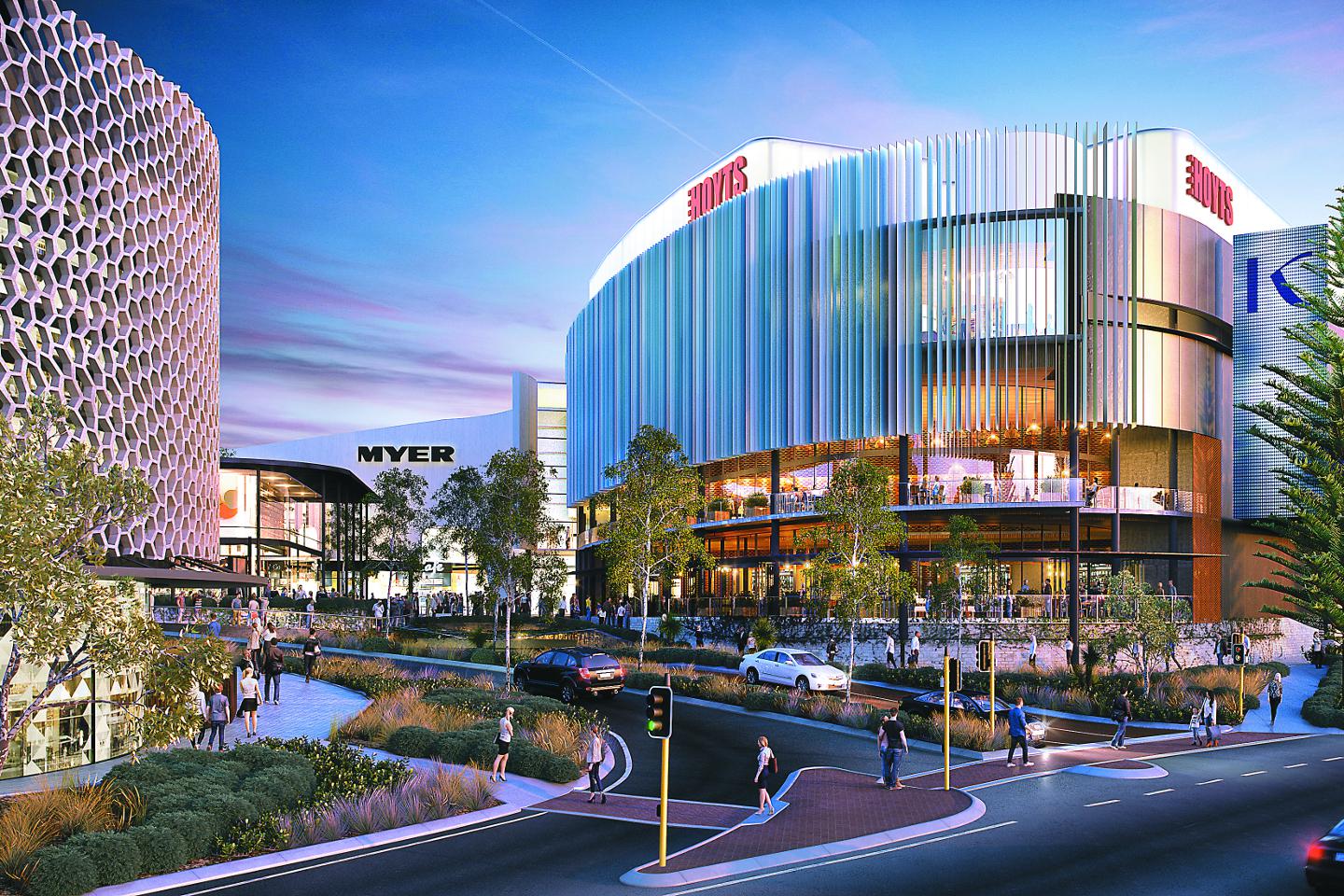 Mr Kirkland said undertaking extensive research with its customers to understand the demographics and spending habits in local trade areas had helped inform decisions for the centre’s future.

“We’re skewing away from things that are becoming more commoditised, and can just be bought on the internet, towards experiences that you can’t replicate,” he said.

“And it’s not just about the retailers; consumers told us they wanted to bring the gardens back into Garden City, so the internal landscaping is (based) a lot around natural light, greenery and water.”

Mr Kirkland said fashion as a percentage of speciality shop space at AMP Capital’s centres had dropped by around 5 per cent in the past five years, and had largely been replaced by an increase in dining services.

Colliers’ 2017 first-half retail report showed that, while there was a 5.12 per cent contraction in Perth’s department stores turnover last year, the cafe, restaurant and food sector grew during this period.

The first stage of the works – a new dining and entertainment precinct featuring several new restaurants and an eight-screen Event Cinemas complex – is due for completion in the coming months.

Part of the mix includes Whitfords Brewing Company, as well as a bowling alley.

Scentre group WA general manager of development, Roy Gruenpeter, said there had been a focus on creating a one-stop-destination full of the very best of Perth.

“We believe our lifestyle, entertainment and dining precincts will be a huge differentiator to the market that currently exists,” Mr Gruenpeter told Business News.

“Food dining and entertainment has been a growth category for us, but it’s also a good opportunity to mix that in with traditional retail.

“The precinct we’re creating gives people the opportunity to experience more than just a shop; they’re coming to experience a lifestyle, coming to meet friends and family and be entertained.” 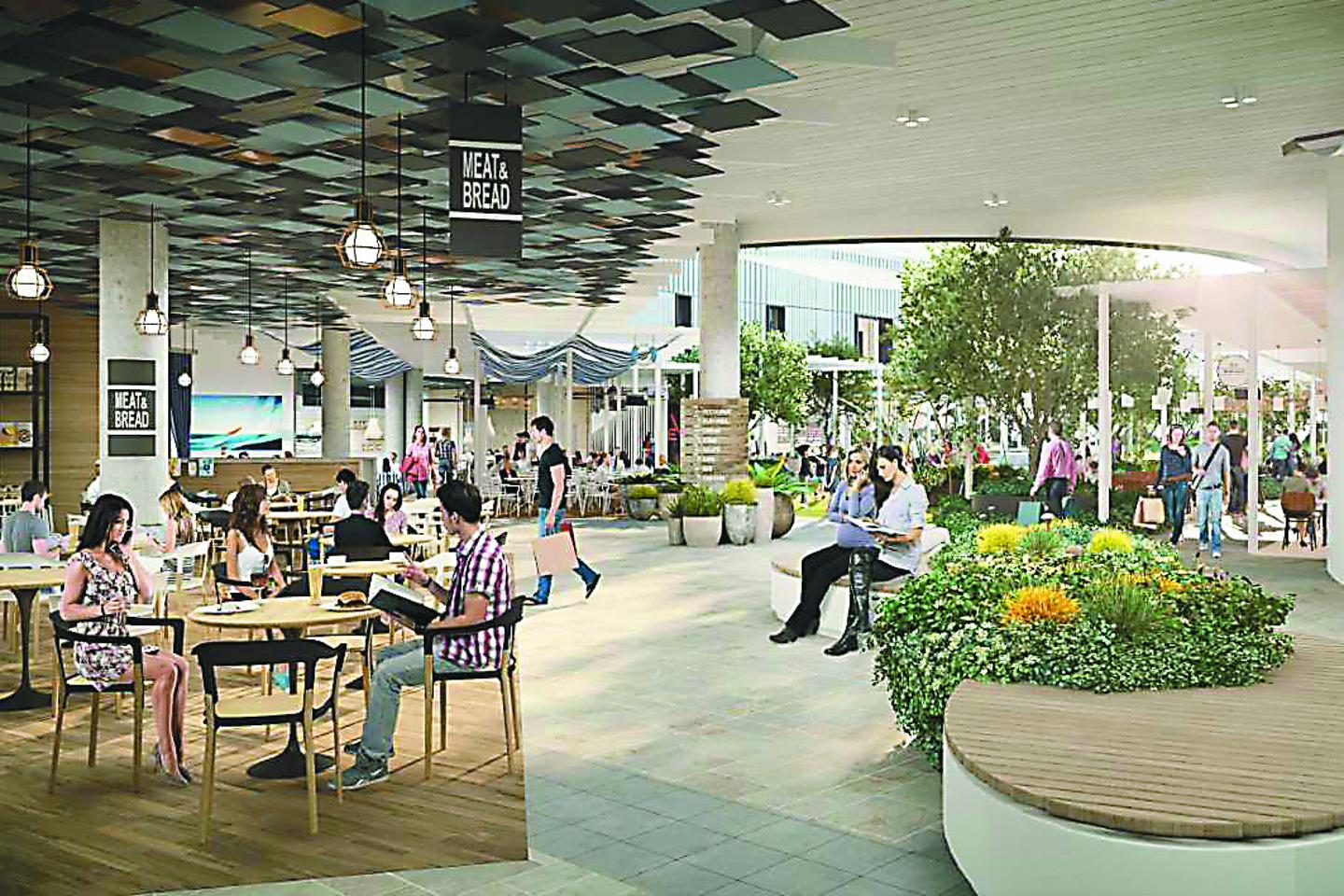 An artist's impression of Westflield Whitford City's new hopsitality offering, which is part of the first stages of the $450 milllion redevelopment.

Westfield Innaloo is in line for a $600 million redevelopment, after Scentre Group upped its investment from an initial proposal of $450 million, due to open in 2020.

Also in the Scentre Group book is a $350 million redevelopment of Westfield Carousel, work on which started in February.

At an expanded 110,000sqm, Carousel would overtake Lakeside Joondalup as the biggest shopping centre in WA, jumping from third place on the BNiQ Search Engine list of WA Shopping Centres.

David Jones will anchor all three Westfield centres, which will create almost 4,000 construction jobs during the development process.

“The pipeline we have initiated is really no different to what we had put to the market a few years ago,” Mr Gruenpeter said.

“We haven’t altered our plans and we haven’t shrunk our developments; we see the long-term opportunity.”

Melbourne-based Vicinity Centres recently announced plans to decrease its spend in WA, with the estimated cost of its Galleria Shopping Centre redevelopment revised from $700 million down to $500 million.

Vicinity’s 2017 annual results stated that planning works would continue for Galleria with the “project cost revised down as the scope is refined”.

The firm did not elaborate on the revised cost in response to inquiries by Business News. 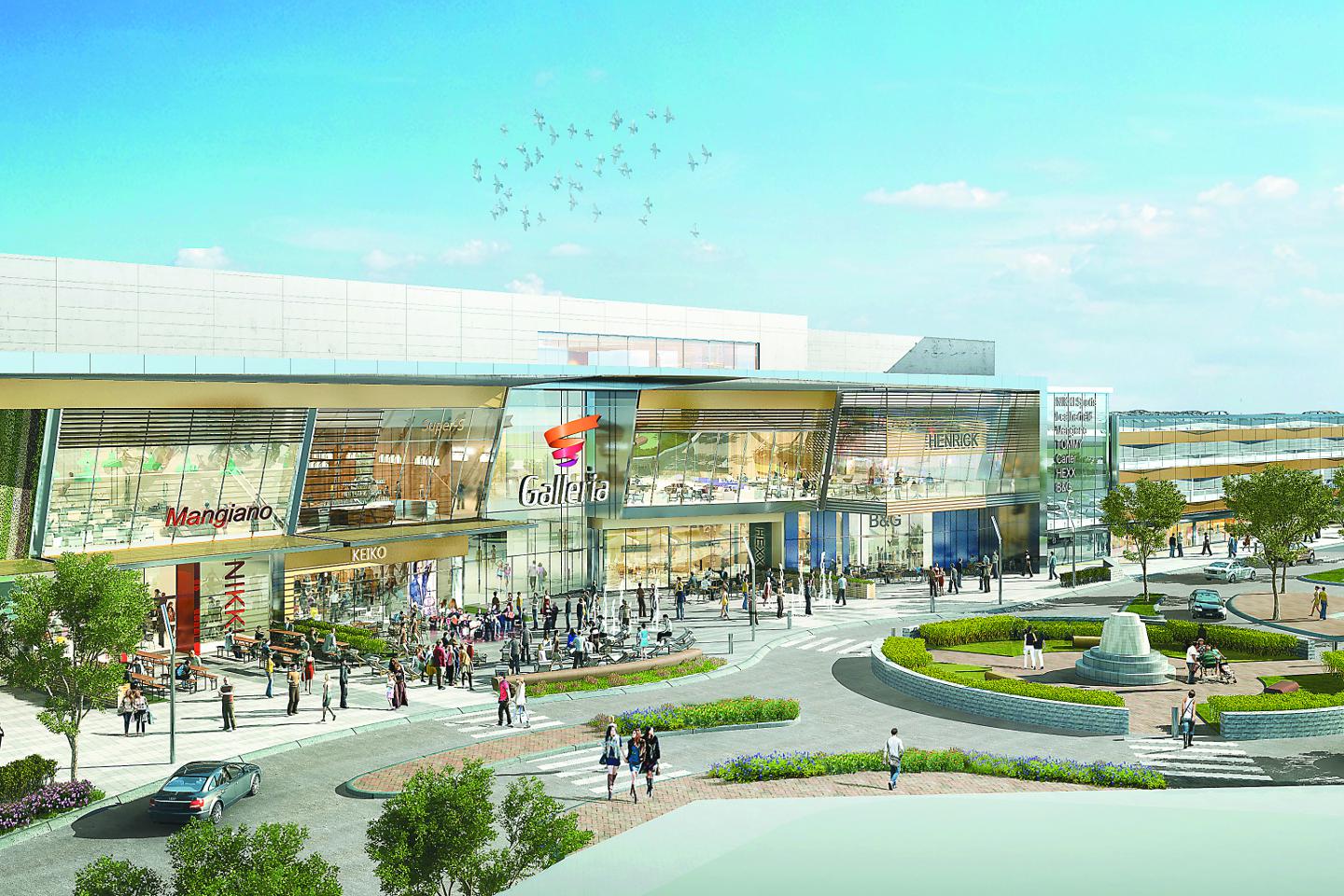 An artist's impression of the $500 million Galleria face-lift.

“And we continue to bring in new exciting brands to stay ahead of our competitors.”

Global chain Aldi and fashion retailer H&M made their WA debuts at Lakeside, while Mr Horwitz said the Watertown Brand Outlet Centre in West Perth, also owned by Lendlease, would open the state’s first Lindt store and cafe next week.

Beyond the state’s major suburban shopping centres, the market for mid-tier offerings has also experienced a lift in investment.

Melbourne-based property investment firm ISPT pumped $50 million into its new Lakelands Shopping Centre, located between Rockingham and Mandurah, which opened in June with a gross lettable area of 21,170sqm.

Hawaiian has started work on its $5 million redevelopment of Melville Plaza, which will feature alfresco dining, a community herb garden and fruit trees, as well as a shaded playground.

Urbis’s Mr Haeren said the mid-tier section of the retail development market faced the biggest challenge – whether to increase its offering to compete with the big players, or to focus on convenience and local community identity.

“Those that sit in the middle will need to figure out where they position themselves,” he said.

“Or they will risk becoming irrelevant which will have a significant impact; how do you recycle that asset into something else?” 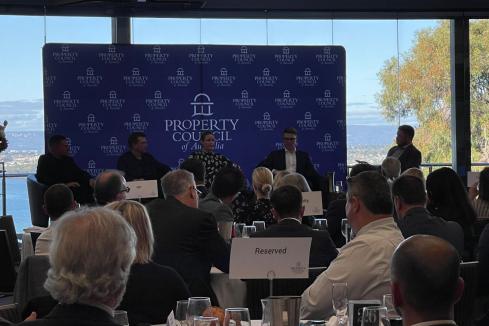