Lifeline makes the call on growth 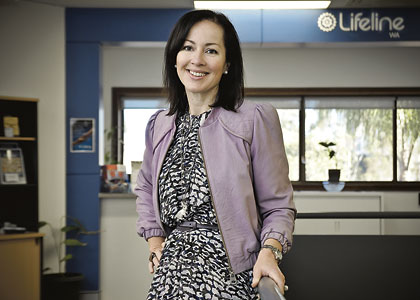 THE Western Australian branch of suicide prevention organisation Lifeline will take its fight to the internet with the development of a chat crisis service to support members of the community.

The not-for-profit organisation enters the new financial year with intentions to establish the online service and plans to grow its revenue to help support its burgeoning services.

Lifeline chief executive Fiona Kalaf, who was appointed to the role five months ago, told WA Business News the organisation’s growth was more of a logical progression of its current position.

“In the last few months since I have been on-board with the team,  and the board, (and) we have been re-looking at our strategic plan and, in particular, looking at our new operational plan for the new financial year,” Ms Kalaf said.

“There are some exciting things coming down the line for us, we will continue to do all the sorts of things that people know us for so that’s the 131114 telephone crisis support line.

“We’re also investigating the potential to offer online crisis chat, which is really an important space in particular for youth that we need to be present for so that’s really exciting for 2012-13.”

She said that every 12 minutes there was a Western Australian in emotional crisis who called Lifeline, so it was important for it to open up additional channels for people to reach it.

The organisation existed under different titles during the 1980s until it was accredited in 1994 by Lifeline Australia to operate as a centre in WA.

The branch is supported by 170 trained volunteers and 24 paid staff, 16 per cent of which are focused on administration, finance and risk management.

The rest concentrate on providing services to the community.

Ms Kalaf said the organisation also offered a raft of education and engagement programs to schools, companies and even local councils to help people identify colleagues or friends in emotional crisis.

“We are also pushing forward with our counselling services, so we have a number of services on the go, crisis counselling, bereavement counselling and separation counselling.”

Lifeline operated on a turnover of $2.5 million for the 2011 financial year, with 30 per cent of its revenue coming from government funding and 70 per cent from donations and fund-raising events such as the annual HBF Run for a Reason.

Ms Kalaf told WA Business News Lifeline would build on its revenue through more fund-raising and donations as well as expanding its paid services.

“With something like our crisis telephone line, there is no cost recovery model for that so the client who calls doesn’t pay for that service,” she said.

“But, in other of our services like counselling and education and engagement programs, we do charge for that.”

The organisation is working with its corporate partners to help expand services, including its education and engagement programs, which would increase its client base and revenue.

“We talk about suicide risk but also offer courses on how to prevent cyber bullying, so there’s a range of services or products that we offer on a regular basis,” Ms Kalaf said.

“It’s driving some of those products where we can have a cost recovery model and then that also can support the crisis support areas of our business where we can’t realistically charge a person who is in crisis for engaging with us in an online chat.”