Retailer Ray Della-Polina says there are lessons for the business community in the failure of his Malz business. 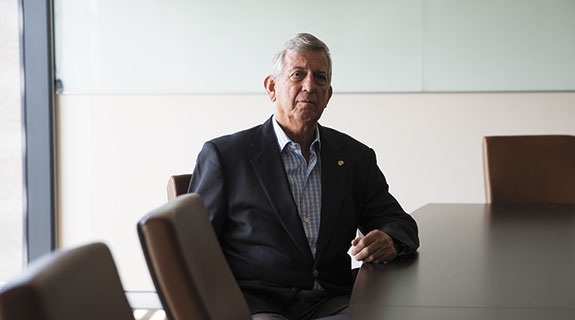 Retailer Ray Della-Polina says there are lessons for the business community in the failure of his Malz business.

At 75 years of age, one of Perth’s most familiar retailing faces of the past few decades is broke, but not broken, having lost everything when his bank called it quits on his efforts to keep his business afloat.

Ray Della-Polina’s Malz automotive and outdoor retail chain business was ailing last year when the directors decided to put it into administration, optimistic that the business could survive and a trade sale completed.

The move by Mr Della-Polina and his colleagues followed almost 18 months of challenges for the group, which he admits was under-capitalised from the start and over-extended by a decision to expand by opening two news stores to give the chain the scale it needed.

In hindsight, Mr Della-Polina said, he and his business partners, including family members, would do things differently.

But by Australia Day 2014, they risked trading while insolvent if they carried on as they were and called in an administrator, with whom Mr Della-Polina believes they had a chance to deliver an outcome that would have provided something for unsecured creditors (of which he was one).

Instead, the bank acted immediately to appoint its own receiver and, within weeks, the business was sold in a fire sale to Metcash’s Automotive Brands Group.

It is now part of the Autobarn chain.

Mr Della-Polina believes the price tag was less than half of the $4.3 million deal the owners had arrived at with Metcash more than a year earlier. That deal, in late 2012, had been scuttled by warranties and provisions the small business owners were required to sign.

He believes that, with more time and under the watchful eye of the administrator, Malz could have got a better result for all creditors, even if it was just a trade sale at a better price – one that didn’t result in him and some of his partners losing it all, including their homes.

“The banks own this space, they terrify people,” Mr Della-Polina told Business News.

While he admits he made mistakes, the experienced businessman claims the system for dealing with business failure is itself broken and needs to be fixed – adding his voice to many clamouring for US Chapter 11-style laws where the courts play a greater role in allowing a business to trade out of difficulty.

“Perhaps there should be a serious study made of systems used in other countries,” Mr Della-Polina said.

“Perhaps a good place to start is the US.”

He believes the Productivity Commission ought to review the way insolvency and company administration is handled because of the damage done to the economy by wiping out businesses that are going concerns, and crushing the financial capacity of individuals with experience and skills to offer the nation.

“Destroying businesses out of hand that have good systems, good technology and culture and whose only sin is undercapitalisation cannot be in the best interests of the country, not to mention the pain and anguish wrought on hard working young executives and their families,” Mr Della-Polina said.

“If there is not going to be Chapter 11, they have to allow voluntary administration to run its course for a certain amount of time.

“Once the receiver is in, that’s it. You are treated like some sort of criminal.”

The irony in this is that Mr Della-Polina probably never needed to be back in business.

In 2003, automotive accessories chain Supercheap Auto paid $25.3 million for the Marlows business, which was developed by Mr Della-Polina in Western Australia and grew to operate in three states with 21 stores and $80 million in annual turnover.

Among the 17 owners were then listed investment group Chieftan Securities, and Alesco Corporation.

But restraining an entrepreneur is like caging a lion and as soon as an escrow period was over, he was back in business.

While the industry might have been familiar, Mr Della-Polina admits that he underestimated the capital requirements for a startup in the fast-changing, consumer-driven automotive accessories market.

The group ploughed capital into systems, understanding that managing the increasingly costly inventory was critical, but did not pump prime the business to the degree necessary at the beginning.

Instead, Mr Della-Polina personally drip fed capital into the business from his savings to supplement his original $1.8 million investment.

“I should have just bitten the bullet, it is not the environment where you can survive under-capitalised, the cost of everything is so high.”

Mr Della-Polina also regrets using an untried adviser in an attempt to raise capital for the business in the latter stages of 2013 when the first deal with Autobarn had fallen through.

A fund raising effort was ill-timed and its failure meant the business was unprepared to meet the demands of the peak Christmas retail period.

Administration and then receivership followed within weeks.