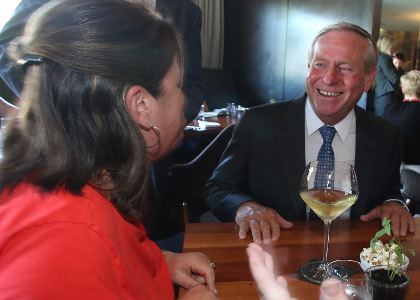 Mr Barnett at 353 Restaurant in Wembley this afternoon.

Premier Colin Barnett has raised the stakes in the popularity contest in the run up to the March 9th state election by announcing plans to loosen up liquor laws.

Mr Barnett has announced a Liberal government would do away with laws which restrict restaurants to only serving alcohol with meals.

Under the proposed changes restaurants will be able to serve patrons alcohol with the only requirement being that they are seated at a table.

The current laws require all people drinking alcohol to also be having a meal.

Mr Barnett also announced the party would dump laws which have seen restaurateurs  prosecuted because patrons have carried drinks from a bar, across a pavement, and to an outdoor alfresco area.

“To say that you are going from a bar to an outdoor alfresco area (and) the patron can’t carry their glass of wine with them; well that’s just silly,” Mr Barnett said.

“I think anyone that’s been to New York or London will realise just how silly and out-dated (that law) is.”

“All of us have experienced first-hand perhaps going into a restaurant and catching up with friends and just wanting to join them for a glass of beer or wine and being told that they can’t serve you unless you have a meal .

“I think people visiting the state from Europe and other parts of the world just expect to be able (to do that) without having a meal, so it’s WA catching up with the rest of the world.”

“The red tape and the difficulties that restaurants have without being able to offer patrons a drink without a meal – those days are gone,” Mr Woods said.

“There’s still a requirement for people to be seated at a table so we still have a distinction between pubs and bars.”

Owner of 353 Restaurant in Wembley, Matthew Lance, said the changes would be more than a simple opportunity for restaurants to make more money.

“As an industry we need to grow, research and develop and this legislation will actually change the way that restaurateurs service their guests,” Mr Lance said.

"It’s not about business or making more money; we want you to be able to go to your home away from home and have a glass of wine in the same place that you go to in the morning for coffee."

Opposition leader Mark McGowan has supported the changes, but claims Labor floated the idea almost a year ago.

“Back in March 2012, WA Labor proposed lifting restrictions on serving alcohol without meals and allowing patrons to carry their drink to alfresco areas,” Mr McGowan said.

“The Barnett Government ruled this idea out when WA Labor first proposed a trial of this system, clearly to claim it as its own election policy...(It) also blocked a trial of the reform in late 2011 after it had proved popular during the Fremantle Sailing Championships.

“Colin Barnett has opposed small bar reforms at every opportunity both in Government and Opposition. He has no creditability on the issue and cannot be trusted."