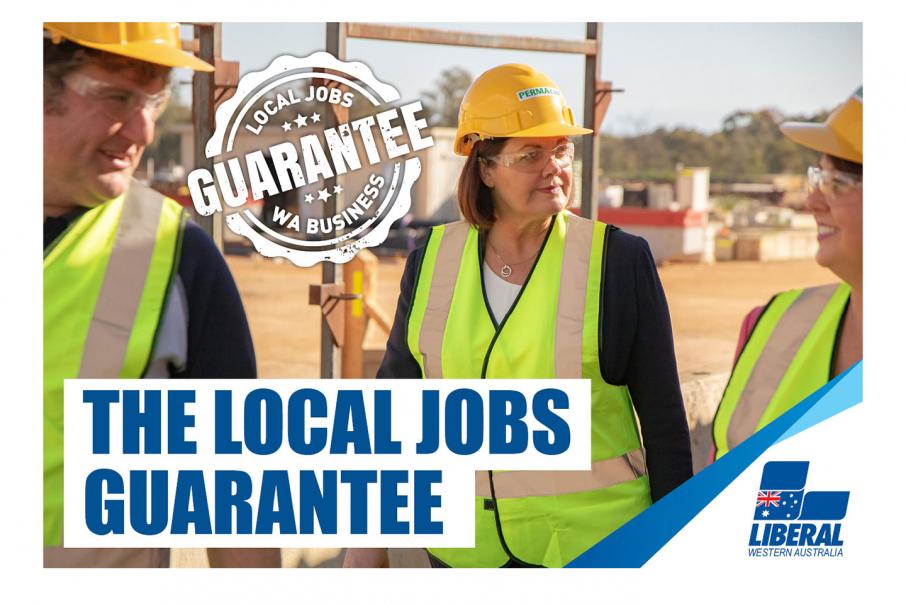 COVID-19 has dramatically changed the jobs landscape and culled many opportunities for West Australians, particularly those fresh out of university or in the early stages of their work life.

It’s one reason why we have launched our first major election commitment - a $50 million Local Jobs Guarantee which will help WA’s struggling economy bounce back quicker and stronger.

But the primary reason is that the WA Labor Government’s local jobs law is fundamentally flawed and gives preference to east coast companies—and even those based in New Zealand—over WA businesses and jobs.

The Liberals Local Jobs Guarantee will:

WA taxpayers’ money must be invested in building WA businesses and creating local jobs—not propping up companies based over east or overseas.

With the Liberals Local Jobs Guarantee, local WA businesses will have the opportunity to bid on billions of dollars of State Government work, creating local jobs and supporting local families.

Since then, Labor has spent billions of WA taxpayers’ money propping up interstate and overseas companies that are being awarded WA contracts.

Frustrating examples include $3 million for WA media monitoring awarded to a Victorian company, $2 million for Labor’s ‘Wander out Yonder’ WA tourism marketing campaign given to a NSW company and billions of dollars of key transport projects awarded to businesses based in Spain, France and the United Kingdom.

WA businesses have missed out on lucrative State Government contracts and work that could quite easily have been done by Western Australians and created jobs right here.

Under the Liberals Local Jobs Guarantee, local suppliers will be given preferential consideration on all state contracts. We will always back local small and family-run businesses.

We understand that not every skill is available locally, but contracts will only be awarded to interstate or international companies when specific services are not available in WA.

These contracts will require WA businesses and workers to be trained to do the job, to make sure WA improves its capability and capacity for future projects.

We will make it mandatory for all government departments to publicly report all contracts over $50,000 that did not go to WA-based companies.

A return to good governance will require bureaucrats to explain in their annual reports the reasons for those decisions. Ministers will be required to explain the reasons to Parliament.

A Liberal State Government will also establish a Local Jobs First Commissioner within the first 100 days of office to ensure our Local Jobs Guarantee is properly implemented.

If a local supplier believes they have been unfairly treated, they can seek to have the decision reviewed and potentially overturned.

The Local Jobs First Commissioner will also play an educational and advocacy role, while undertaking audits to ensure suppliers are not outsourcing work interstate or overseas.

Under Labor, Western Australia is suffering from a jobs crisis that was created well before the COVID-19 pandemic.

Only a Liberal State Government will guarantee taxpayers’ money is kept here in WA to create the opportunities for local businesses and workers.

The Liberals Local Jobs Guarantee will create more local jobs—and it will get WA working again.