Let’s get real on boom forecasts

Rio Tinto has given us one more, very good reason to stop indulging in fanciful projections about the scale of the resources boom. 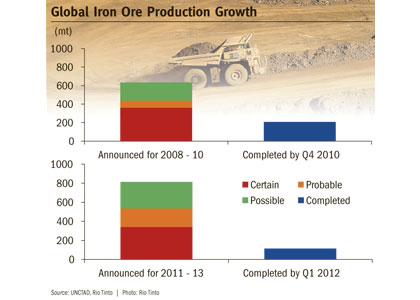 Rio Tinto has given us one more, very good reason to stop indulging in fanciful projections about the scale of the resources boom.

RIO Tinto rightly attracted headlines last week when it talked up the growth prospects for its iron ore business.

Along with its partners, it has committed to spend $US5.2 billion expanding its Pilbara iron ore business, and a further $ US 1 billion on its formative African development.

Chief executive Tom Albanese said Rio was investing in projects that were “resilient under any probable macroeconomic scenario”.

Iron ore chief executive Sam Walsh added that the group continued to see positive prospects for medium- to long-term iron ore demand, driven by ongoing growth in Chinese consumption. In other words, the fundamental driver of the boom is alive and well.

Just as interesting, however, was his follow-up comment about the “increasingly challenged supply response, as several high-profile competitor projects have recently been either postponed or delayed”.

This was seen as a dig at rival iron ore producer BHP Billiton, which has hedged on making any big new spending commitments.

Specifically, BHP chief executive Marius Kloppers said in Perth earlier this month that the group would continue with its current expansion projects, but was not sure if it would proceed with its Port Hedland outer-harbour project, which is speculated to cost in the order of $20 billion.

But Mr Walsh’s comment was not so much a dig at a particular rival – it was much more than that.

The basis for his comment was contained in an investor presentation he delivered last week, which included two fascinating slides.

The amount delivered in the 2008-10 period was only about one-third of the announced circa-600 million tonne per annum increase.

Even larger increases have been announced for the 2011-13 period, and so far only a small portion has been completed.

This is a very sharp reality check for people who keep on quoting fanciful numbers about the expected scale of the resources boom.

It’s a trap that every politician falls into, with Premier Colin Barnett being the latest example.

While welcoming Rio’s latest investment, Mr Barnett issued a statement saying there were $167 billion of resources projects under construction or committed in WA, and a further $151 billion under consideration.

Mr Walsh’s slide showed very clearly that these numbers are nonsense and don’t deserve the attention they get.

Rio’s analysis showed that completed expansions did not even match the ‘certain’ projects, let alone the ‘probable’ or ‘possible’ projects.

The flaky nature of these numbers is illustrated by the wide variations between different sources.

The boffins who put together the state government’s Prospect magazine, for instance, seem to be more conservative – their latest list of projects that are either committed or under consideration only came to $197 billion.

A second slide in Mr Walsh’s presentation gave further insight. It showed that Rio’s expansion projects have been delivered on time and on budget, if not better.

In contrast, expansion projects by other iron ore producers in WA have, in most cases, been over time and over budget.

That experience will make it harder for aspiring producers to secure the equity and debt funding they will need to deliver their projects; especially when BHP, Rio and FMG – along with Chevron with its giant Gorgon and Wheatstone gas projects – continue to employ tens of thousands of construction workers and engineers.

There is one more reason why these numbers are not very meaningful. On a typical iron ore expansion project, 80-90 per cent of the work goes to Australian industry, whereas a typical LNG project only has about 50 per cent local content.

The lesson from all of this is that we need look closely at specific projects, and their economic impact, rather than quoting meaningless telephone book numbers.