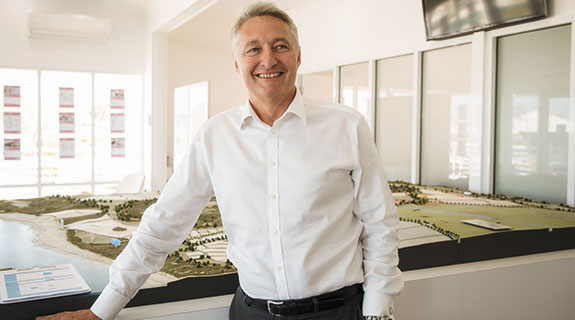 LEND Lease is upping the ante on renewable energy and sustainability at its Alkimos Beach estate in the northern suburbs, recording Australian firsts in terms of green building and energy storage.

The GBCA’s ratings usually apply only to single buildings, and the accreditation marks the first time the rating has been applied to a master-planned land estate.

Lend Lease WA communities general manager Anthony Rowbottam said the rating was the culmination of five years’ work between the development partners, with a lot of doubters along the journey not convinced the goal was achievable across an entire community.

“We’ve got that relentless pursuit to lead the market in sustainability,” Mr Rowbottam said.

“It was certainly a common goal between the development partners and this is good vindication for all of that hard work.”

The solar panels and appliances are supported by incentive packages for residents of the estate, worth between $4,500 and $6,000 and designed to reduce energy bills by up to 50 per cent.

Alkimos Beach will also include 3.6ha of playing fields, 6ha of conservation reserves and 41ha of dune and foreshore reserves, with all homes to be within 800 metres of the town centre and transport links.

GBCA chief executive Romilly Madew said Lend Lease had performed strongly in the sustainability space for more than a decade, but up until now that had all been in single buildings or fit-outs.

“This six-star green star rating for a community project sets the bar for world leadership in community development and demonstrates a long-term commitment to sustainability at scale,” Ms Madew said.

Mr Rowbottam said the benefits of the initiatives would be measured through lower power bills for residents, but also in environmental savings.

“Now it’s about rolling it out in other projects as well,” he said.

LandCorp chief executive Frank Marra said the importance of the achievement could not be understated.

“Lend Lease, LandCorp and the people of Alkimos Beach now have independent proof that this community will deliver economic, social and environmental sustainability,” he said.

“And the industry has proof that world leadership benchmarks in community development are achievable.”

Meanwhile, Lend Lease has also unveiled Australia’s first energy storage trial to get the most out of the solar photovoltaic systems, which will be installed on all the homes at the estate.

The trial involves the installation of a community scale lithium-ion energy storage system, with 100 residents to participate starting from early 2016.

Lend Lease, LandCorp, the Australian Renewable Energy Agency, and Synergy will spend $6.7 million on the trial over the next four years.

Other initiatives of the trial include new electricity retail models, 30-minute interval metering and data analysis, as well as education programs to help residents manage energy use.