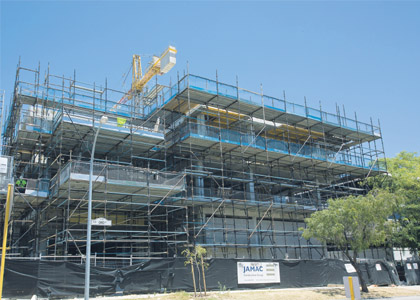 LEIGHTON Properties has stolen a march on rival developers, including Brookfield Properties, aiming to start work on Perth’s next large office buildings.

Leighton announced last week that it was in negotiations with HBF over the sale of a planned 10-storey office building at the Kings Square development, on the Perth Entertainment Centre site on Wellington Street.

That followed Leighton’s announcement last November that Shell had signed up as the anchor tenant for another office building at Kings Square.

These agreements are likely to underpin the start of construction this year of the two office buildings while other developers continue the search for anchor tenants.

These include Brookfield, which was believed to have been targeting Shell as the anchor tenant for its planned Brookfield Place South development.

Brookfield was also understood to have struck agreements with accounting firm Deloitte and law firm Corrs Chambers Westgarth, both currently in Woodside Plaza.

Collectively, Shell, Deloitte and Corrs would have filled more than half of the planned 32,000 square metre development, located on the south side of the current Brookfield Place tower, which serves as BHP Billiton’s regional headquarters.

Another developer that had been eyeing Shell as the anchor tenant was Melbourne company Grocon, which was believed to have held an option over Luke Saraceni’s site at 374-396 Murray Street.

Grocon is believed to have moved on after missing out on the Shell opportunity; the latest development plan for the site proposes construction of two primarily residential apartment towers.

The proposed HBF building in Kings Square is expected to have about 13,000sqm of office space. It will replace HBF’s current head office in Murray Street, at the eastern end of the city.

The proposed Shell building will be substantially larger, with 11 storeys and around 20,000sqm of office space.

In total, the Kings Square development is expected to have six buildings with 85,000sqm of office space.

It adjoins the larger City Link development site. A consortium of Leighton Properties and Mirvac was named last year as the state government’s preferred proponent to develop the five-hectare site with offices, apartments and retail space.

Apart from HBF and Shell, the only other formal pre-commitment in the Perth market in recent months was by engineering firm Aurecon.

It has agreed to take 6,000sqm, or just over half the office space at 853 Hay Street, which is being developed by current owner Perth Diocesan Trustees.

Meanwhile, there are several smaller office developments in the city and West Perth that are in the market for tenants.

Developer St Ives has just appointed Jones Lang LaSalle and CBRE as leasing agents for its 3,500sqm development at 1 Ord Street, which is due to be completed mid-year.

Other developments due to be boost supply include Qube’s 4,600sqm building at 100 Havelock Street, and the continued refurbishment of 197 St Georges Terrace and the adjoining buildings on Mill Street.

The modest increase in supply, combined with a slump in office demand after last year’s cutback to iron ore projects, has left most industry analysts expecting an increase in the office vacancy rate when the Property Council of Australia’s WA branch releases its latest data next month.