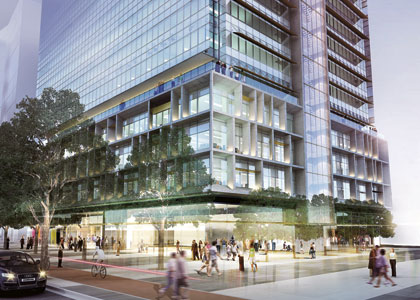 OUT WITH THE OLD: What’s planned for Kings Square, as it will be known.

THE property development arm of national construction giant Leighton has established a Western Australian beachhead with a deal to develop the strategic Perth Entertainment Centre site as part of the state government’s City Link project.

Leighton has teamed up with the centre’s owner Seven Group Holdings – the biggest shareholder in the company behind Channel Seven and The West Australian newspaper – to develop the site, which will be known as Kings Square.

While Leighton has been present in WA via its construction and contracting businesses, this is its first local foray into property development, thought to be worth more than $1 billion, and will add to the national players operating in the state.

Also active in this state is Lend Lease, which has become a major player in just a few years of local operation, winning significant WA government-led developments in Alkimos and Waterbank in East Perth.

Both firms are understood to be vying for the right to project manage City Link, which is being overseen by the state government.

Leighton said it had received East Perth Redevelopment Authority approval to commence the first commercial building on the site, an 11-storey tower with 19,000 square metres of office.

The environmentally friendly building will be 5-Star Green Star and 5-Star NABERS rated.

The building development, part of Seven’s 85,000sqm footprint, will create an extension of King Street linking St Georges Terrace to Wellington Street. The site has long been associated with the Seven television network, which partnered with Michael Edgley to build the centre in 1974.

The 8,000-seat venue was considered the world’s biggest, purpose-built regular theatre until its demolition started this year. It was closed for business in 2002.

He said the master plan had significant inbuilt flexibility to offer big tenants the opportunity to seek alternatives that better suited the needs of many modern workplaces.

“Most tenants in Perth are not that big in terms of the national market,” Mr Barr said.

“The current buildings accommodate that.

“But there are some large users and for them campus-style accommodation is what they want.”

Project leasing director Digby Sutherland, of Sheffield Property, said the first stage of the development’s focus was on staff facilities and amenities.

“This is an incredibly important aspect, as we appreciate that staff recruitment and retention is the new battleground for employers today,” Mr Sutherland said.

Construction of the first stage is scheduled to start in the middle of 2012, with completion expected early 2014.

Mr Barr said that Leighton’s entry into Perth was mainly focused on the CBD but it would look at other developments where there was an infrastructure component such as a transport hub.

He confirmed Leighton has bid for the overall City Link project, which is estimated to be worth about $3 billion.

“That is the stigma Perth has to overcome,” he said.

“The market has to understand that these contracts the miners and the oil and gas people have are 20- or 30-year contracts.

“Perth is moving from boom and bust to a long-term scenario.”

But he also recognised that growth for growth’s sake was not in the best interests of the city.

“The challenge for governments and developers is not just to grow,” Mr Barr said.

“You have to get the balance right.

“It has been a great place to live and it always will be but I think you have to look at what happens around the world and take their lead here.”

This reflects some of the thoughts of Premier Colin Barnett who spoke about this issue at a WA Business News Success & Leadership event last week.

“This is the decade in which that capacity is being built and you will get continuing growth not of this scale,” Mr Barnett said.

“The city of Perth is going through a period of change. The last period of great change was 100 years ago.

“Sinking the rail-lines of Perth, which we’ve talked about for a 100 years, will accelerate very rapidly.

“The waterfront development, which we’ve talked about for the last 40 years, will see serious construction start in the new year.

“On the eastern side, the side new stadium, we will say exactly which bit of land it’s going to sit on in the next few weeks, and that will be the start of the east side precinct, which will have the potential to have other entertaining and sporting facilities, and maybe some elements of river development, great areas for families to entertain, parklands, garden setting.

“On the west side its very noticeable how West Perth has developed, and how Perth and West Perth have grown together, and before the end of the decade there will probably be an artistic, very spectacular, garden setting to be developed from the city and Kings Park and the parliamentary precinct leading into West Perth.

“So, on every corner of the city, that change is taking place.”