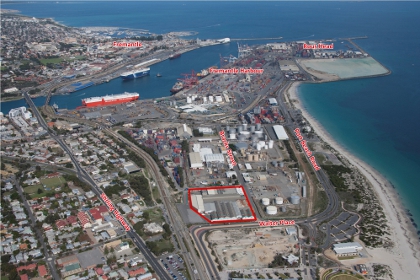 A 1.68 hectare tract of land at Leighton Beach has been placed on the market, raising the possibility for further high density residential development just 200 metres from the ocean in North Fremantle.

The property, which is currently zoned industrial, is located at the southern boundary of the Leighton Beach rail marshalling yards, which have been redeveloped into Beachside Leighton.

The site is currently tenanted by Standard Wool, which co-occupies the property with furniture retailer Super A-Mart.

Jones Lang LaSalle director of sales and investments, Phillip Fogliani, said the surrounding 19 hectares of industrial land was becoming increasingly underutilised, and had the potential to become one of Perth’s most exclusive residential developments.

“There is a genuine feeling that all of the land owners are on the same page and that there is an intention to optimise the potential of the locality by pursuing a coordinated rezoning and/or structure plan submission,” Mr Fogliani said.

Jones Lang LaSalle managing director John Williams said a report had been compiled detailing the processes necessary to re-zone the land as urban, which would allow for densities in excess of 160 dwellings per square kilometre.

“This could become the most significant regeneration project in the metropolitan area,” Mr Williams said.

“Its beachside location within the Western Suburbs means it would immediately match, if not out-rate earlier iconic developments like East Perth and Subiaco.