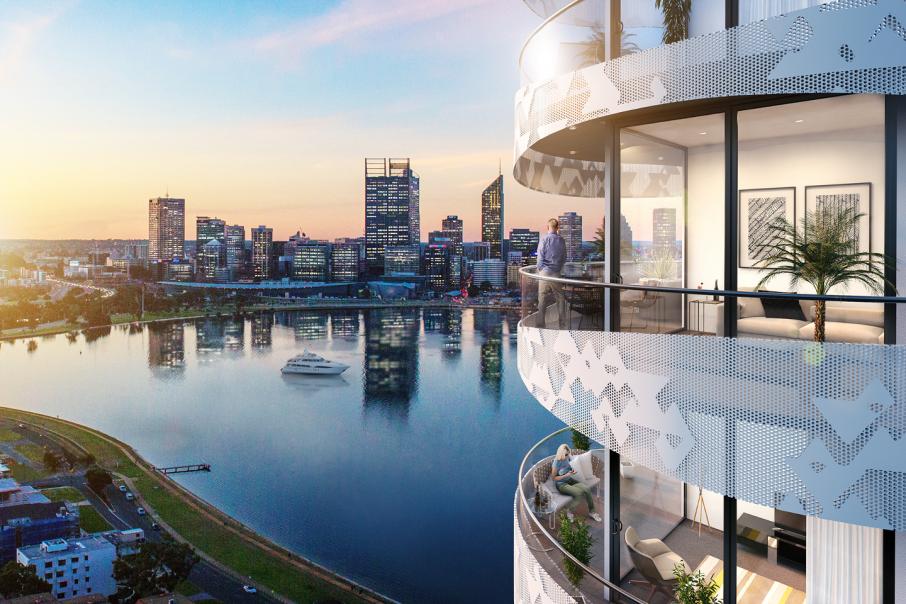 An artist's impression of the balconies proposed for the Lumiere project, designed by Hillam Architects.

The rejection by planning authorities of a 44-storey apartment proposal on Mill Point Road in South Perth is unlikely to be the last word in the battle over the contentious project.

Lumiere was originally proposed to be a 29-storey apartment tower, and was approved by the DAP in May last year.

However local resident action groups led a Supreme Court challenge against that approval, which was ultimately successful on the basis that the proposal did not meet requirements for commercial use under South Perth planning rules.

Prior to the Supreme Court's decision, however, Edge Visionary Living lodged a fresh development application for a 44-level building, with the extra floors to contain serviced apartments to satisfy the commercial requirements.

Yesterday, the 44-level tower was rejected four to one by the DAP after four hours of debate and discussion.

Reasons for the refusal included concerns that the building's scale would have an adverse impact on the amenity of the area, and that the proposal did not meet requirements of the City of South Perth's town planning scheme.

That's despite the project being located in an area of South Perth where the local council removed height limits in 2013 in an effort to encourage commercial and residential development, which would then build a business case for the construction of a train station at Richardson Street.

Council officers quizzed by the panel also admitted that the proposal was completely compliant with the City of South Perth's current regulations.

Speaking on behalf of Edge Visionary Living, former South Perth councillor John Syme said the fact that the project included 147 serviced apartments made it the type of development that would have been anticipated under the performance clauses of the suburb's planning scheme.

"From an economic and a planning point of view, this is extremely consistent with the precinct plan," Mr Syme said.

However, late last year the City of South Perth moved to change its planning scheme to redefine the special development area to not include any properties north of the intersection of Mill Point and Labouchere roads.

Business News understands the South Perth council was surprised by the swiftness of developers' response to the new guidelines, as well as the scale of the projects, which were not the intentions of the planning scheme and necessitated an amendment.

That change, known as Amendment 46, will be assessed by the Western Australian Planning Commission next month, before Planning Minister Donna Faragher's final determination.

There is not yet any indication of what the WAPC, or Ms Faragher, will decide with regards to the proposed changes.

Former planning minister under the Court government, Richard Lewis, addressed the DAP against the proposal, saying the 44-level Lumiere was the most extreme request of the thousands of projects he had come across.

"It is in no way compatible with the general intentions of the South Perth planning scheme," Mr Lewis told the DAP.

There was also lengthy debate over potential traffic impacts, with proponents saying the extra traffic would be minimal, and opponents claiming significant congestion would result if the development went ahead.

Metropolitan central DAP presiding member Charles Johnson said while he was not anti-development, he agreed that the Lumiere project was a "bridge too far" for the area.

But Mr Johnson said the rejection did not necessarily kill off the project, with Edge Visionary Living expected to appeal the ruling at the State Administrative Tribunal.

"Do not believe that this is the end, the matter still has a ways to go through the planning process," Mr Johnson said at the DAP meeting.

Edge Visionary Living managing director Gavin Hawkins declined to comment immediately after the DAP determination, but confirmed the developer would appeal the decision at the SAT.

City of South Perth Mayor Sue Doherty described the decision as a win for the local community.

"The council has acted in the best interests of our community and we are reassured by the fact that this development will not go ahead as originally proposed."