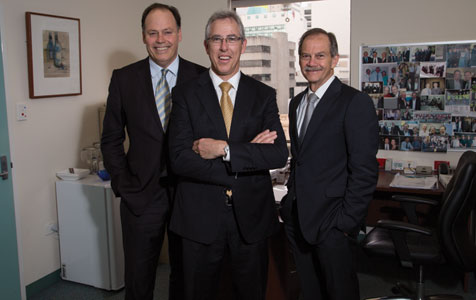 The incoming director of WA's premier medical research body says he wants better integrate it with other health organisations.

After almost 15 years at the helm of the state’s peak body for medical research, Peter Klinken will move into a new role within the organisation as an ambassador.

Peter Leedman, who has served as deputy director of the Western Australian Institute for Medical Research for the past decade, will be taking on the director’s role early next year to coincide with the official opening of the institute’s new facility in Nedlands.

WAIMR chairman Laurence Iffla said Professor Klinken’s leadership had been instrumental in the development of the institute.

“He has brought WAIMR to its present status as an internationally recognised medical research institute,” Mr Iffla told Business News.

He said Professor Leedman would offer WAIMR a new style of leadership that would help it to expand its research capabilities.

“Professor Leedman is a clinician as well as a scientist, so we know he will bring a bench-to-bedside approach to the institute,” Mr Iffla said.

Professor Leedman is the co-founder of biopharmaceutical company MiReven, which is currently testing a new anti-cancer therapy, and also practices as an endocrinologist at the Royal Perth Hospital.

Despite having studied and worked in the eastern states and abroad, Professor Leedman recognises the potential of working in Western Australia.

“One of the advantages of being in an isolated city is that people mostly stay in Perth, or once they come and experience the lifestyle they’ll settle here,” Professor Leedman said.

“This can be a major advantage in developing collaborative networks to facilitate clinical trials and long-term follow up of patients and their families.”

In his new role, Professor Leedman said, he would endeavour to raise the profile of the institute through increased integration with other organisations in the health system, and community involvement in research programs.

The University of Western Australia, Royal Perth Hospital and Sir Charles Gairdiner Hospital founded WAIMR in 1998. Its research focuses on the genetic and environmental causes of diseases including cancer, diabetes and heart disease.

In 2014 the organisation is due to open two new research buildings at the Fiona Stanley Hospital in Murdoch and the QEII Medical Centre in Nedlands.

The latter, built at a cost of $100 million-plus, will be completed first and will provide research labs for cancer, leukaemia, diabetes and melanoma, and will also offer programs for school and community groups via the BioDiscovery Laboratory.

Funding for the facility has come from federal and state governments ($50 million and $25 million respectively), the University of Western Australia ($25 million), Lotterywest ($5.4 million), and the McCusker Charitable Foundation ($1.5 million).