Ben Aldridge is a professional speaker and the owner of 30 Foot Drop, an organisation dedicated to increasing openness and inclusion for people with a disability. Ben is a veteran, and at the age of 22, suffered a 30-foot drop which left him a quadriplegic. 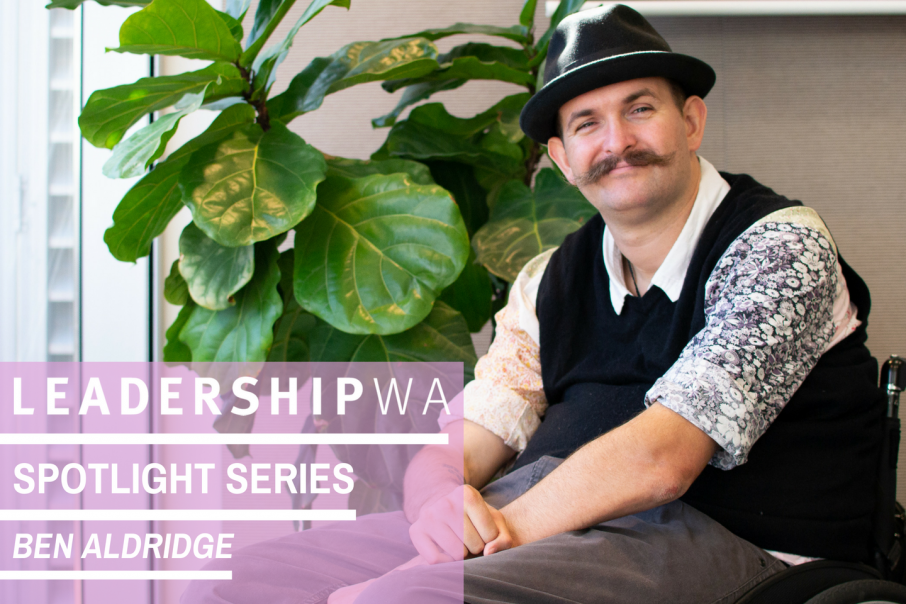 Ben Aldridge is a professional speaker and the owner of 30 Foot Drop, an organisation dedicated to increasing openness and inclusion for people with a disability. Ben is a veteran, and at the age of 22, suffered a 30-foot drop which left him a quadriplegic. He is a graduate of Leadership WA’s LeadAbility program and is a current participant in the Rising Leadership program.

For Ben Aldridge, life has always been about making a difference and effecting change, both before and after his accident which left him in a wheelchair at the age of 22.

“I originally joined the Defence Force in 2004. I joined because I was fed up with people living in fear. At that time, there was very much a culture of fear after September 11 and the Bali bombings. There was a culture of fear existing in the world, and I got fed up with it and wanted to do something about it, even if it was just something small.”

“If I could help dispel this fear of others, even in a little way, then I was happy.”

Joining the Defence Force was only the beginning. Since then, Ben has spent his life fighting for the rights and inclusion of marginalised peoples. The only difference is now, post-accident, Ben does it from his wheelchair.

“There is a lot of ignorance [about disability and veterans], but it’s not malicious. But it is ignorance, and it needs to be changed. Knowledge is power, and I still have a voice.”

“I’ve basically fallen into a great way of following my values, of seeing an issue and working towards changing it, and working towards making a difference around it. So, I’m very fortunate in that way, and very fortunate to have supportive people around me. I would never be able to do this without the support of my wife and my family, and my friends as well. They’ve been great and just those supports, it’s just so important to everybody and anyone.”

But Ben’s transition to becoming a professional speaker after his accident wasn’t overnight. It took time and hard work for Ben to find a new outlet for his desire to help people and make a difference.

“I remember my first big shock after my accident. I’d snuck out of the hospital to go across the road and buy some rums because it was a mate’s birthday and he couldn’t get up out of bed. And, there I am at the bottle shop trying to get some rums out of the fridge, and the shop attendant comes up and talks slowly and very loudly to me – ‘Can. I. Help. You?’”

“Because I was in a wheelchair, it was like my brain didn’t work properly. That was my first real eye-opening at this sort of bias.”

After his accident, Ben worked as a receptionist for a disability employment service. He worked his way up to becoming safety coordinating, coordinating work health and safety for 16 sites around WA. He then became facilities coordinator.

But it wasn’t until he was given the opportunity to facilitate access and inclusion training for the City of Bunbury that he found his new passion.

“Just from there I realised I had an ability to make a difference in society by educating people around these issues. I’m in a great position where I call myself a lucky unlucky? person.”

“I was lucky because I was in the Army at the time [of my accident], so I’ve got Veteran Affairs on my side. As far as funding goes for my medical expenses and that, I’m very lucky compared to the majority of people with disability.”

“I’ve got this privileged position and I need to make the most of it because I have all these enablers, I have the ability to make a difference within society.”

Now, with his expertise, Ben advises organisations on how to be more open and inclusive to people with disability.

“The most common issue is actually taking the first step.”

“You’ll find so many executives and people in high positions saying that yes, there is a problem, but then not actioning it.”

“[The City of Bunbury] had it as part of their core values that they want to employ more people with a disability.”

“They told me ‘look, there’s a lot of pushback around the idea of hiring people with a disability, so what can we do about it?’ Our suggestion to them was ‘lead the way. Hire some people within your own department.’ And it’s worked amazingly.”

For Ben, the key to making sure a business or workplace is fully accessible for people with a disability is actually bringing in those voices and experience in the planning stage.

“Most city councils have access and inclusion committees that have people with disability, and you can put anything in front of them and they will run you through it. It’s all about good design. Instead of having a set of steps and a lift next to it, have a ramp.”

We asked Ben for three tips for organisations that wish to take the first step towards being more inclusive.

“First one: contact your local disability employment service. They are amazing people, they know their clients inside and out, and they will be able to match you with somebody.”

“The second tip is: don’t make a big deal out of it. Just bring them in and start them working. People with disability don’t want to be treated separately or differently. Treat them as a normal employee. Someone who just comes in like anybody else and starts doing their job. If you treat them like normal, everyone else will treat them like normal.”

“The third tip is: they may cost you less. “There are allowances from the government to compensate businesses because sometimes people with a disability can take slightly longer to learn the job. The government will pay a part of their wages during the first three to six months, depending on what sort of disability they have.”

“At the end of the day, it makes amazing business sense, and people with disability are loyal. You give them that opportunity to shine and they will. They’re very, very loyal.”

An additional challenge to Ben being a leader in both his community and the state more broadly isn’t just his disability; he’s also self-employed.

“At the end of the day, I answer to myself. This puts me in the position of being able to follow my values, which is amazing.”

“There are days when I wake up and I just don’t want to get out of bed. It’s those days where I need to lead the other voices in my head, so to speak.”

“I’ve been humbled by the reaction that I’ve gotten from people by choosing to go ahead and become a professional speaker.”

It’s this journey from his accident that has given Ben perspective on his life.

“Before my accident, I wish I had known that if you have the passion and the vision and the resilience, that you can do anything. One thing I wanted to try but never did – because I never thought that I would have the resilience – was to try out for the Special Forces.”

“I now know that resilience is not something that you either have or don’t. It’s a resource that we all have and we all build and we all use up depending on how life is going. You build resilience by doing things that you love.”

“One of my favourite things is taking the dog down to the beach and just letting her off the lead. She goes nuts and its great. I’ve got a four-wheel drive chair and it’s amazing, so we go along the beach and that’s how I build resilience.”

“I use that resilience up when I’m talking about emotive subjects on stage, when I’m being vulnerable to a room of complete strangers and sharing my experiences.”

“I go into high schools and talk to year nine and ten students about mental health and resilience.”

“I’m an outsider coming in. I’m not just a teacher talking about it, I’m someone who has been through it themselves.”

“It’s something that needs to be talked about, so let’s start getting the next generation used to the idea of it.”

The challenge for Ben was arriving at this point of positivity after his accident, and the struggles that followed.

“It’s like anything in life. It everyone was easy, it wouldn’t be worth doing.”

“After that I got to a point where I wanted to try and start working again so I could financially contribute to the relationship, not just emotionally contribute.”

“You’ve always got to be advancing your life.”

But while Ben has come out the other side and is effecting positive change throughout the community with his message, there are still things that make him apprehensive.

“I’m always fearful about falling out of my chair. I get around really well. I’m quite mobile, but I can’t get myself in and out of my chair. When I fall on the ground, I am completely reliant on others. Unfortunately, there is still that stigma within me of having to be a big strong independent man.”

“What terrifies me the most as well is looking back and realising that I haven’t been a good father. The most important thing to me is being a good dad and setting a good example.”

Ben is a graduate of Leadership WA’s LeadAbility program (which aims to develop a diverse leadership community in WA), and is a current participant in the Rising Leadership Program.

“LeadAbility helped to clarify my vision and find my voice when it came to what I actually wanted to do. I’d be working for five years post-accident when I started doing LeadAbility, and although work started as a challenge because I needed to build up my stamina, it progressed to the point where I was a very valued member of the team. But what I was doing wasn’t my passion.”

“If LeadAbility helped me clarify my vision, the Rising program is helping to sharpen it. It’s armed me with the tools I need to encourage other people along for the ride.”

“Something that the journey of LeadAbility and Rising has really driven home to me is that everybody has challenges in their life. It’s just some challenges leave us with permanent visible reminders. Yes, I broke my neck. Yes, I suffer from PTSD. But everybody goes through bad things, and just because somebody has a visible reminder of it, doesn’t mean they’re anything special. We’re just normal people.”

While Ben has made steps towards becoming a leader in WA, he’s got his sights set on more distant horizons.

“My goal is to get out my message by speaking interstate and then internationally. I started off in Bunbury and I’m slowly working my way out.”

“There’s still a lot of work to do. It’s a challenge I’m really looking forward to, and travel is something I’ve always been very passionate about.”

“Before I broke my neck, if you had told me I’d be jealous of paraplegics, I would have told you you’re an idiot. It’s amazing what a change in perspective does to you.”

“Yeah, life can get turned on its head, but things go wrong in everybody’s life. 90% of who you are and if you’re successful, in my opinion, is how you deal with the things that go wrong. It’s how you face that adversity and how you overcome it.”