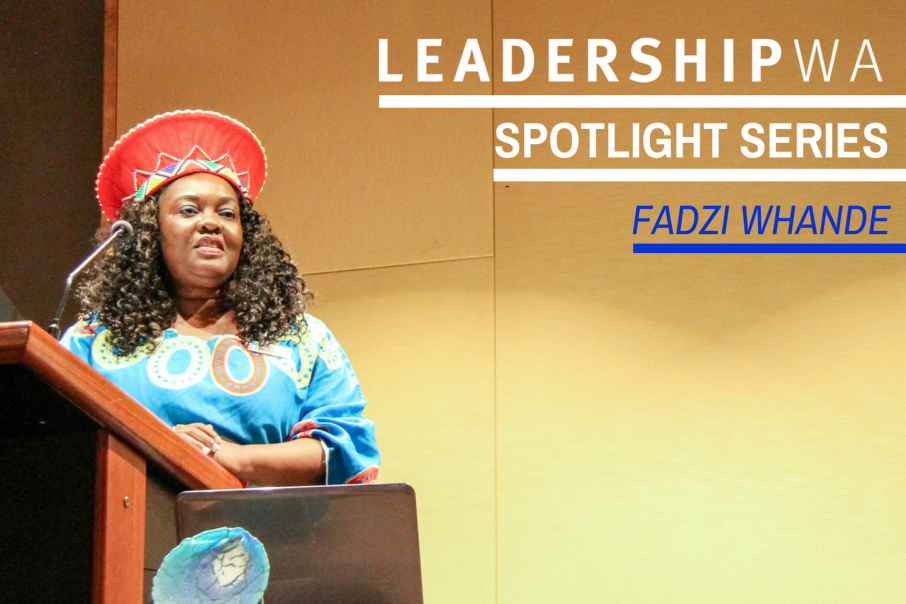 In 2017, Whande was voted as Valedictorian by her Leadership WA Signature Program Cohort, which comes as no surprise upon hearing her story and knowing the principles that drive her as a Western Australian leader.

Her story begins in Zimbabwe and later, Botswana, where she worked for a large telecommunications company with a corporate and government portfolio.

‘That was the time when mobile phones were just being introduced to Zimbabwe,’ she said, ‘I was responsible for  training government ministers on how to use their mobile phones.’

Whande said that while her career was progressing well, she is always questioning her impact and the ‘footprint’ she she would leave behind.

‘It all changed,’ Whande said, ‘when I started volunteering for a HIV/AIDS program … That completely changed my life.’

This experience took her to the UK, where she continued to volunteer and learn about the impact and affect of terminal illness on people.’

The real turning point for her career was her completion of a Graduate Certificate in Social Impact in 2012, which tapped into a long-held belief that helping those around her and contributing to society is important. Her desire to help others stemmed from seeing United Nations volunteers looking for survivors of a plane crash on the news when she was six. ‘I just thought that was beautiful,’ said Whande.

‘At the back of my mind, that was always something: I want to grow up, and I just want to help people,’ Whande said.

But Whande found working in the not-for-profit sector frustrating, and found that a lack of resources often meant worthy projects would be discontinued or not reach their potential.

Eventually, she found herself working in diversity and inclusion. But Whande said that at first, she was perplexed as to what a ‘Diversity Consultant’ even was.

‘I literally had to google, ‘diversity consultant’,’ Whande said. ‘I had no intention of working in diversity and inclusion - I say the work found me.’

The first thing you notice about Whande’s approach to promoting diversity and inclusion in the workplace is that it is highly strategic and practical.

‘You need to give people basic skills,’ Whande said. ‘If people have never been exposed to it, how are they going to learn?’

Whande’s work educates people about the ‘importance of changing language’ and deals with ‘unconscious bias’, but she says the most important thing is providing people with the practical skills of how to achieve that.

In her opinion, the key to shaping her work and journey as a leading social advocate is authenticity, and that seeing great authenticity among her fellow Leadership WA Signature Program leaders was enlightening for her.

While undertaking the program, she ‘saw authenticity, but also saw people who were doing amazing things.’

One of the most important aspects of her role as a leader is empowering other leaders to succeed through being authentic, being vulnerable, and being open to personal growth.

‘Being vulnerable is very, very difficult,’ Whande said, ‘but I think when you’re showing vulnerability, you’re actually the most secure.’

Most of Whande’s work is focused on building inclusion and diversity strategies and programs in the workplace for others, but her own approach as a leader embodies and incorporates the same principles.

Whande said, ‘I’m always asking myself: ‘is that helpful, or is that not helpful?’’

Whande doesn’t deny that her line of work is difficult, and can become exhausting - but she has an unrelenting positivity that drives her.

‘I accept that a lot of the things I’m fighting for now,’ Whande said, ‘I might not see in my lifetime…  Martin Luther King didn’t get to see his dream fulfilled, but it was fulfilled.’

She has however, observed progressive change during her tenure in the diversity and inclusion space, at least in Western Australia.

‘One thing that’s really changed is there’s dialogue now, and I always believe dialogue is good.’

Therein lies Whande’s true driver: she believes endlessly in the power of story, and in the need for stories to be told and listened to.

She feared that because people are inherently more comfortable with people that mirror their own beliefs, we listen to stories that only ‘reinforce one narrative.’ But, she said, ‘when we are able to hear other narratives, it reshapes our perspective.’

When asked for her final words of wisdom as a leader, she spoke simple and powerful words: