Leaders tap into The Big Issue(s)

Local vendors of The Big Issue showed prominent Perth business leaders and politicians what it’s like to sell the street magazine today as part of a campaign to increase awareness of the everyday challenges facing the homeless and disadvantaged. 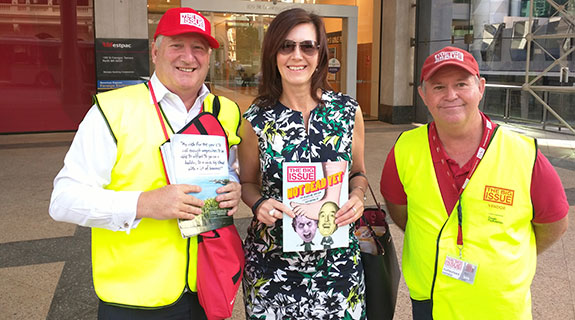 Westpac WA manager Jay Watson (left) sells a Big Issue to Sarah Dudley after getting some tips from vendor Ron.

Local vendors of The Big Issue showed prominent Perth business leaders and politicians what it’s like to sell the street magazine today as part of a campaign to increase awareness of the everyday challenges facing the homeless and disadvantaged.

The Big Issue not-for-profit organisation hopes to boost sales of its magazines, which retail for $7, half of which goes to the vendor, by $100,000 this week with activities being held across the world.

When Business News visited WA Housing Minister Colin Holt and vendor Sean at the corner of Hay and William streets this morning, Sean greeted a regular customer who asked after his new selling companion.

He replied he didn’t know what his new friend did for a living, but this morning he was showing the new recruit the ropes. 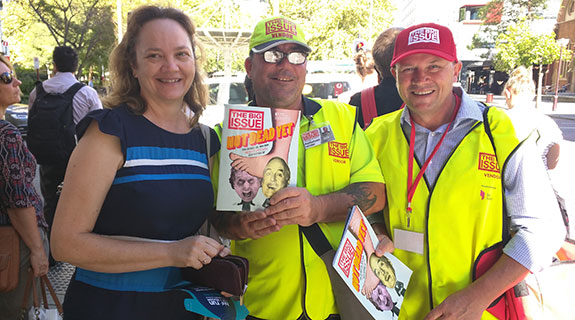 Mr Holt, who had met Sean only an hour earlier, said he was having a nice time getting to know Sean, who lives in a unit provided by the state, and supplements his pension by selling The Big Issue regularly to people waiting at the lights.

The experience also brought Mr Holt in contact with another seller of the magazine, who informed him of the positive progress of his application for housing.

“I met a gentleman this morning who’s a vendor and he said to me, ‘I sent an email to you about three weeks ago because I was homeless and I was hoping to get a house’, and he said ‘I’m moving in tomorrow’,” Mr Holt said.

“He was a happy customer, so the process and the system works. We do house people who are in need.”

“Make me some money,” he said.

Mr Twigger said he had participated in the event because it was a good experience. 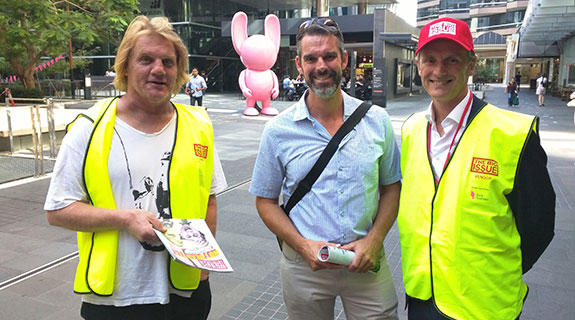 “I struck up a very good relationship with Brett”, Mr Twigger said.

“I’m in the corporate finance world, but as it happens my wife is a social worker and in the mental health field, and we’ve also got the working with children qualification and we’re foster parents. So we’ve always had a strong connection to the community and it’s an opportunity to give something back and see what it’s like on the street.”

Westpac WA general manager Jay Watson joined Big Issue vendor Ron out the front of the Westpac bank on St Georges Terrace, where they capitalised on knowing many of the passers by.

Mr Watson said he was pleased to be part of a good cause and Ron, who has sold the magazine outside the bank for seven years, had been teaching him a few things.

“I see him every morning when I go for my coffee,” Mr Watson said.

St Vincent de Paul Society WA chief executive Mark Fitzpatrick, who was selling The Big Issue with Caroline at the overpass near the Perth train station said it had been humbling to learn about her life and why she sells the magazine, usually near London Court on St Georges Terrace. 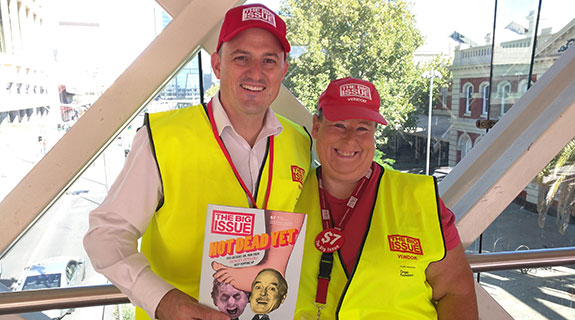 “You can understand how hard it is because you sort of feel invisible.”

He said he took time out of working for his own charity this morning, because tackling homelessness and disadvantage was a group effort.

“Vinnies connects with people who are disadvantaged, homeless or have mental health (issues) and overall I think that we can’t solve any of the problems unless we do it together and so I’m more than happy to help charities do what they need to do so hopefully together we can help people less fortunate than us,” Mr Fitzpatrick said. 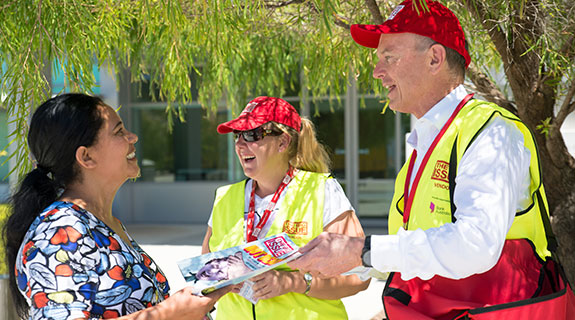