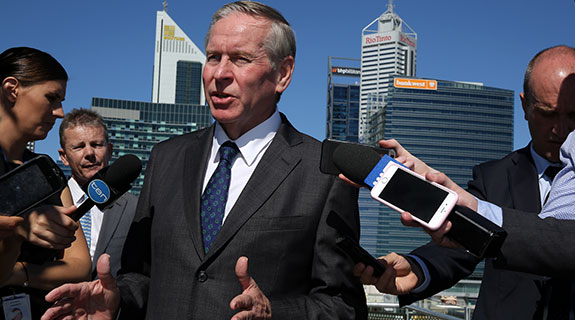 The ‘debate’ over the role of the Commonwealth Grants Commission and the allocation to the states of revenue from the GST has taken on farcical proportions.

While there is general agreement – from Prime Minister Malcolm Turnbull down, several state premiers notwithstanding – that there is a problem, consensus is lacking on what to do about it.

In essence, there is a total lack of leadership on the issue, starting with the prime minister, when it comes to support for Premier Colin Barnett’s criticism of the commission’s formula for redistributing the money, and the appalling deal this state receives.

In short, the politics of self-interest prevails. After promising so much when he toppled Tony Abbott as prime minister last September, Mr Turnbull has been mugged by political reality. First and foremost he has an election to win; anything that might stand in the way is being jettisoned.

Mr Barnett put Western Australia’s case to the prime minister during his recent visit west. Mr Turnbull said while he was ‘alert’ to the problem, it would have to be placed on the agenda at the Council of Australian Governments meeting and discussed and settled between the states.

That was the escape clause when Peter Costello was treasurer, and has been recycled with monotonous regularity ever since.

The CGC was established in 1933 to compensate states with a lower revenue-raising capacity, and therefore an inability to provide key services comparable to the wealthier states. WA was a major beneficiary of top-up payments, although the opening up of the Pilbara in the 1960s, and the resultant iron ore royalties, started to change that equation.

Unlike some of the other states, it could never be claimed that WA was resting on its oars, happy to take their money. WA’s development ethos saw to that. The ‘next big project’, perhaps inspired by the drive of former premier Sir Charles Court from the 1960s and 1970s, was always just around the corner.

The state initially did well from the introduction of the GST by John Howard’s government in 2000 (signed up to by Richard Court’s Liberal government, of which Mr Barnett was a leading member). And even when iron ore prices took off, with a resulting jump in royalties, commission payments increased because of a three-year lag in its calculations.

But that same formula has come back to haunt Mr Barnett, who recently predicted that while the lag currently penalised WA, along with weak prices, the state’s per capita share of its GST contributions would jump to more than 50 per cent within two years.

However, partly due to weaker population growth, the state will get a paltry $148 million extra next year. The premier can’t take a trick.

At the same time, states such as South Australia, which is already heavily subsidised through its naval ship building contracts, gets an extra $554 million thanks to the commission.

You wouldn’t run an efficient business like that, let alone a national economy, which must be internationally competitive to survive.

THE prime minister has secured the trigger required to call a double-dissolution election, confirmed for July 2, following the Senate’s failure to pass the Australian Building and Construction Commission Bill last week.

But it seems Malcolm Turnbull always had an early poll in mind.

“If the Senate passes both bills (ABCC Bill and the Registered Organisations Bill) there won’t be a double dissolution election on July 2,” the prime minister told a business lunch during his recent Perth visit, noting there was “every indication … they will be rejected”.

“But they (crossbench senators) have the opportunity to pass them and we would be delighted if they did. And if they did pass them then there would not be an election – at least a double dissolution election – on July 2.”

Why did he feel the need to qualify himself even if the key bills were passed?

Probably because both his and the coalition’s standing in the polls have been sliding since he grabbed the top job last September. And the sooner the election is held the better for him.