Leaders look to technology for growth

Innovation isn’t just a buzzword drummed up by the new regime in Canberra. 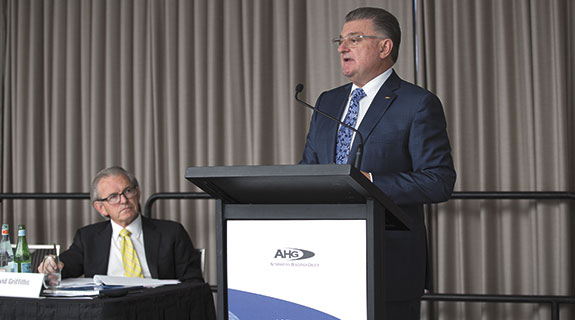 Innovation isn’t just a buzzword drummed up by the new regime in Canberra.

I have stated plenty of times that I believe Western Australia, with just more than 2 million people, plays well above its weight when it comes to innovators.

Unfortunately, they just get lost in the noise created by hundreds of mining companies with which they have competed for attention and capital for the past decade.

So the AGM season is a great time to hear a few anecdotes about what’s taking place, and my sources have pointed me to two notable players in this regard – miner-cum-mining-services player Mineral Resources, and car retailer and logistics group Automotive Holdings Group.

Their innovation strategies are very different, but it’s worth highlighting them because they are both leaders in their fields in different ways; both have management teams that really understand shareholders expect them to use their industry experience to outmanoeuvre the competition.

Firstly, Mineral Resources has taken a very different route to anyone else in the field I can think of. Its game plan is to use its mining operations, processing and logistics experience to provide opportunities to do more than just get paid by the tonne.

To maintain a reputation as a more nimble operator, Mineral Resources is constantly assessing new ideas, some of which become public. Earlier this year the company captured the headlines when it pitched the idea of an elevated skyrail-type train/conveyor hybrid system to move ore more cheaply in the Pilbara.

Somewhat more low-key at the end of the year, Mineral Resources has reportedly patented another idea – carbon fibre trays for dump trucks.

In its presentation announced to shareholders, Mineral Resources said it was seeking to replace mining truck trays with newly developed exoskeletons “to generate mine to process plant cost savings of up to 15 per cent”. I understand a significant saving is in the weight of the tray, which otherwise needs to be hauled to and fro at considerable cost in fuel.

I am told the company is seeking a patent and is preparing to manufacture.

A very different type of innovation is taking place at AHG, the country’s biggest automotive retailer, which is run out of Osborne Park.

According to presentations lodged with the ASX, chairman David Griffiths and managing director Bronte Howson talked about the opportunity to access the private-to-private market – effectively cars sold in classifieds and by people driving around with for sale signs in their windows.

This represents almost 20 per cent of the market and AHG, like all dealers, has none of it.

The business has recognised innovation in this space overseas and is moving to play a role as a broker between private buyers and sellers, by bringing them together and providing services such as quality checks and finance.

If one thing the 2000s taught us was to avoid standing still.

This decade is highlighting the need to find cheaper ways to do new things. AHG built a major presence in the logistics market when many were probably telling it to stick to selling cars. Now it is using its car-selling experience to best adopt new technology to sell more cars, more cheaply.