Prominent Western Australian business and government leaders, including Nev Power and Dale Alcock, will hit the streets this week to sell The Big Issue magazine as part of the not-for-profit organisation’s annual awareness campaign. 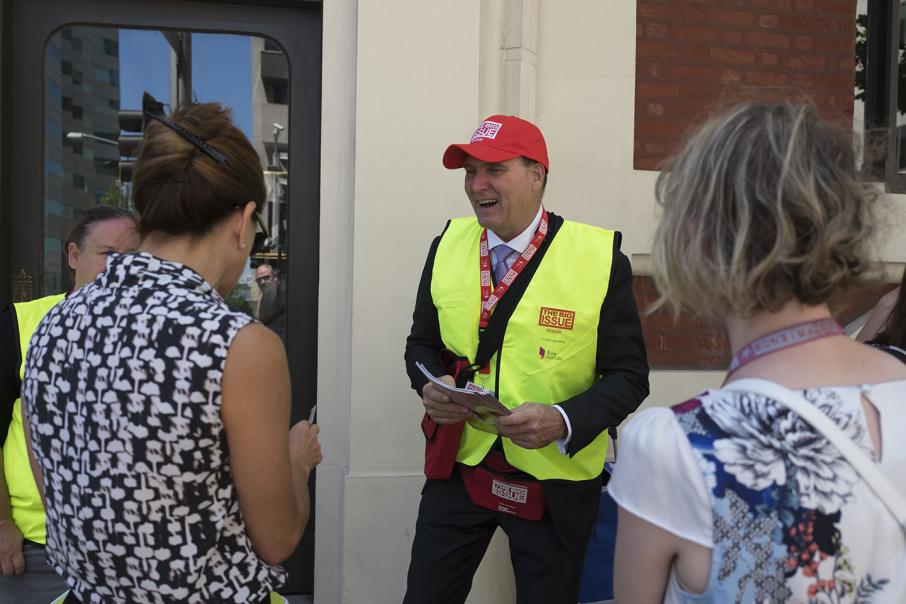 Nev Power says selling The Big Issue yesterday showed him that it could be challenging to engage with people as they go about their daily lives. Photo: Attila Csaszar

Prominent Western Australian business and government leaders, including Nev Power and Dale Alcock, will hit the streets this week to sell The Big Issue magazine as part of the not-for-profit organisation’s annual awareness campaign.

From early Monday morning until Friday, several WA leaders will sell the magazine at various locations around Perth in 30-minute stints alongside The Big Issue vendors.

“I admire street vendors like Caroline, who I had the pleasure of meeting today, for taking the initiative to make positive changes for themselves,” Mr Power said.

“The experience showed me that it can be challenging to engage with people as they go about their busy lives.

“The difference between a polite decline and not being acknowledged at all is pretty significant – a smile and a nod go a long way.”

He said giving people a chance to improve their circumstances by providing meaningful economic opportunities was the foundation of several Fortescue programs, which were aimed at ending the disparity between Aboriginal and non-Aboriginal Australians.

“Such as our Billion Opportunities program, which has awarded $1.8 billion in contracts and sub-contracts to Aboriginal-owned businesses in the past five years,” Mr Power said.

During the past 20 years, more than 6,500 Australian men and women have earned an income through selling The Big Issue, where vendors buy copies of the magazine for $3.50 and sell them to the public for $7.

The current edition coincides with International Vendor Week, which aims to highlight the 10,000 people selling street magazines in 35 countries around the world.

The Big Issue hopes the extra help and attention from WA leaders can boost sales of this month’s edition to put $100,000 in vendors’ pockets.

“More than 500 vendors sell The Big Issue around Australia and they are working to earn an income,” he said.

“We hope selling alongside prominent business leaders will help vendors forge new connections in their community and encourage the public to support their local vendor.”