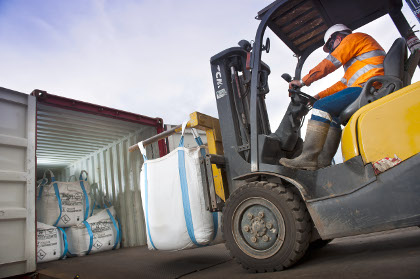 The lead carbonate is required to be double-sealed in bags and shipping containers for safe transport.

The mining company formerly known as Magellan Metals has been cleared by the state environmental regulator to resume the export of lead carbonate from the Port of Fremantle, subject to a strict set of new conditions.

The Environmental Protection Authority today announced that Rosslyn Hill Mining, a subsidiary of Canada-based miner Ivernia, would be allowed to resume transporting lead from its Wiluna mine to the port, after meeting conditions applied in July last year.

The company will be allowed to ship lead carbonate concentrate through Fremantle for the next five years, if it complies with the new conditions.

EPA compliance manager Ian Munro said the new conditions included the requirement to transport the bag in sealed bags inside shipping containers; all bags and containers to be inspected at the Wiluna mine before being loaded; containers to be securely stored and lifted only from the top; comprehensive soil, air and water sampling along the transport route; independent third party review of its operations; and Rosslyn Hill to provide a $5 million bank guarantee if an emergency response plan is not implemented properly.

Ivernia said it is targeting the second quarter of 2013 to resume lead exports.

A Rosslyn Hill Mining spokesperson said the EPA approval was a significant milestone for the restart of operations at the Wiluna mine, which is now known as Paroo Station, but a final investment decision had yet to be made by Ivernia's board of directors.

The transport of lead carbonate through Fremantle was halted in April 2011 after mud containing the material was found on the outside of shipping containers.

The contamination was later found to have come from historical lead handling at various sites where containers were staged, and not related to Magellan’s operations.

The discovery of the mud followed two separate breaches of license conditions.

The first incident, which occurred in December 2010, involved the detection of lead carbonate in air samples taken from inside the shipping containers.

Subsequent investigations found the lead carbonate to have been below national standard levels and exports were resumed.

Following discovery of the lead-contaminated mud in April, the Canadian-owned miner put Paroo Station on care and maintenance.