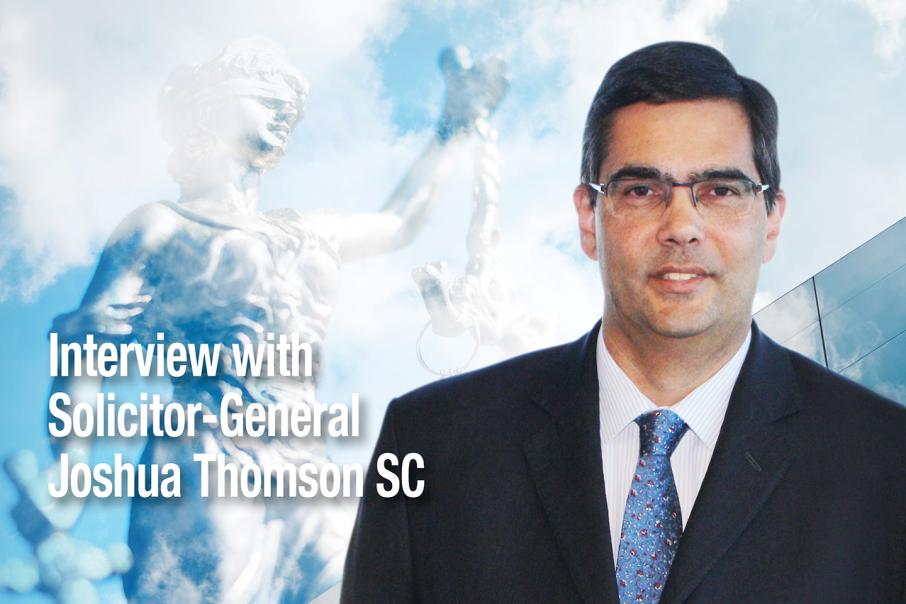 The office of Solicitor-General occupies a singular, unique position in Western Australia, intersecting both law and politics. The Solicitor-General is the second law officer of the State, being the principal legal adviser to the Attorney General, while also remaining independent. Joshua Thomson SC was appointed to the position in October 2018 after a successful career as a barrister. As he settles into the role, the Solicitor-General gives his views on a range of issues relating to the law and legal profession of WA.

On the role of Solicitor-General

The most important role of a Solicitor-General is to protect the constitutional interests of the State before the High Court. That is the most intellectually challenging and satisfying part of the job. However, the Solicitor-General has a more general role in facilitating the proper administration of justice in the State. The ultimate responsibility for that lies with the Chief Justice and the Attorney General. However, there are many things that a Solicitor-General can do to assist both of them to reach the best outcome. That may involve canvassing the views of the profession about judicial appointments, it may involve advising about legislation which is integral to the administration of justice in this State, or it may mean being aware of large issues for the legal community such as the manner in which substantial cases are conducted.

The role of the Solicitor-General is not confined to constitutional cases and civil issues. The Solicitor-General has a range of statutory powers relating to criminal law matters, including the ability to sign indictments and to authorise investigations. Perhaps the oddest thing I have had to do so far was my first appearance as Solicitor-General. Far from being a large constitutional case before seven judges of the High Court, I had to deal with a subpoena matter in the Full Family Court. However, small as it sounds, it raised substantial and important issues about the relationship between judges and litigants.
To a large extent, the role and workload of the Solicitor-General depends upon the legislative aims of the government of the day, and the reforms which the Attorney General may wish to make to improve the legal profession. The role also depends upon the likelihood of constitutional clashes arising, between Commonwealth and State governments of different persuasions or with different federalist philosophies. The present State Government has a substantial legislative agenda and the present Attorney General has a long list of important reforms for the legal profession. That makes my own role particularly interesting, and particularly busy.

Courtroom technology has developed very significantly over the last 20 years. It is now commonplace for this technology to be used to overcome the need for victims in child sexual assault matters being confronted by the accused in Court. If it can be used regularly in this context, where the credibility and liberty of individuals are in contest, there is no reason why it cannot be used effectively to overcome the tyrannies of distance in most cases. All justice involves a degree of balancing various imperatives, and the cost imperative is an important consideration. In many cases, the cost of having everyone present in one court room cannot now be justified, having regard to the technological improvements which exist. Nonetheless, there is inevitably a degree of lag time in courts becoming familiar and comfortable in the use of technology. I can foresee a sharp increase in the use of technology over the next decade.

On the greatest challenges facing the WA legal profession

The immediate challenge for the WA legal profession is joining the National Uniform Legal Scheme. I think that this is a desirable development. It introduces uniformity into the rules which apply to regulate the legal services market nationally. This makes that market more accessible to smaller jurisdictions, such as WA. It also preserves regulatory and disciplinary controls for the WA profession within WA, which is an important principle.