Last plot for sale at The Springs 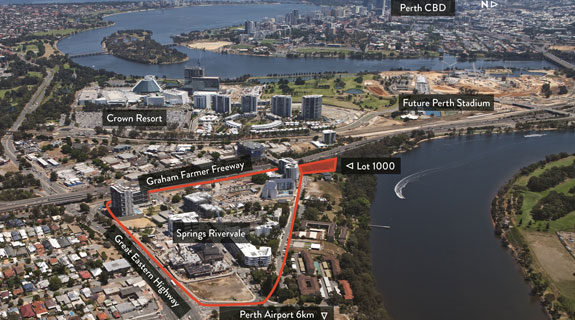 The last lot at The Springs in Rivervale has hit the market, with LandCorp releasing a 4,069-square metre riverfront plot for sale today.

The Springs has been one of Perth’s apartment development hotspots, with developers Finbar Group, BGC Development and Psaros among the leading proponents with major projects in the area.

LandCorp chief executive Frank Marra said the serviced plot, where planning guidelines allow a building of up to nine-storeys, would likely be an attractive proposition for developers.

“This is the final opportunity to take part in an infill project that is in a prime location that will eventually offer residents high-quality, compact urban lifestyles,” Mr Marra said.

“Interested parties would need to be quick to ensure they did not miss this opportunity with the offers invited period open until December 9.”

Mr Marra said 20 lots had sold at The Springs, with more than 1,500 people expected to ultimately call the riverside precinct home.

“Residents are also benefiting from a host of local amenities including the Perth Stadium at Burswood, due to be up and running by the 2018 AFL season, well-designed public open spaces connecting to the Swan River and an international hotel featuring entertainment and dining options,” he said.